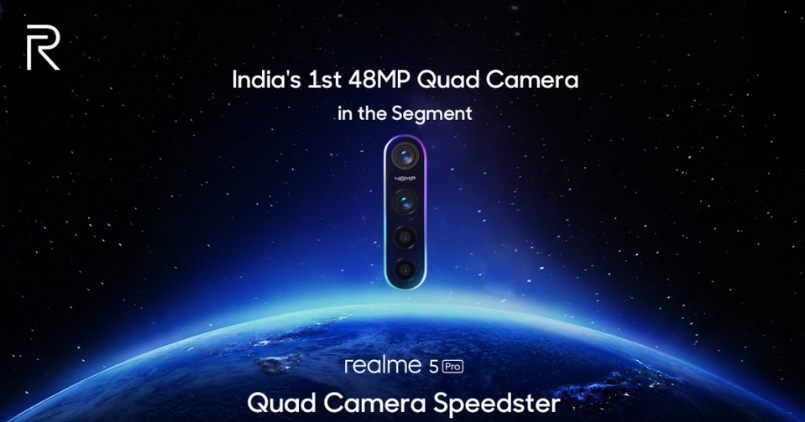 Realme has started to tease about the launch of its first Quad camera smartphone in India, dubbed as Realme 5 Pro. The young smartphone maker is taking things next level by launching India’s first 48MP Quad Camera smartphone in its segment. Considering the price point, Realme deals at, we may see a new handset priced aggressively for the specifications it offers.

It was in mid-July when Realme unveiled its first pop-up selfie enabled smartphone in India. Dubbed as Realme X. Now on August 20, after a month, the handset maker is ready to unveil yet another phone for its consumers in the country. This time, the brand teases its new phone will be a Quad camera-enabled smartphone.

The new handset will be named Realme 5 Pro as per the teaser. Realme would be releasing this new phone in partnership with Flipkart. That means this new upcoming phone would be available for purchase on Flipkart. Realme is also believed to be introducing this as a series. Meaning there will be one more phone, probably dubbed as Realme 5.

What do we know about the Realme 5 Pro?

Now talking about the rumours, according to a leakster on Twitter, the new handset is believed to pack a Snapdragon 712 processor. Expect an AMOLED display with waterdrop notch style and an in-display fingerprint sensor.

The final specification mentioned by the leakster, Sudhanshu Ambhore is about the rear camera. He says it will be sporting the Sony IMX586 sensor as the primary sensor in the Quad Camera setup.

What do you guys think of the upcoming Realme 5 Pro? Let us know in the comment section below.