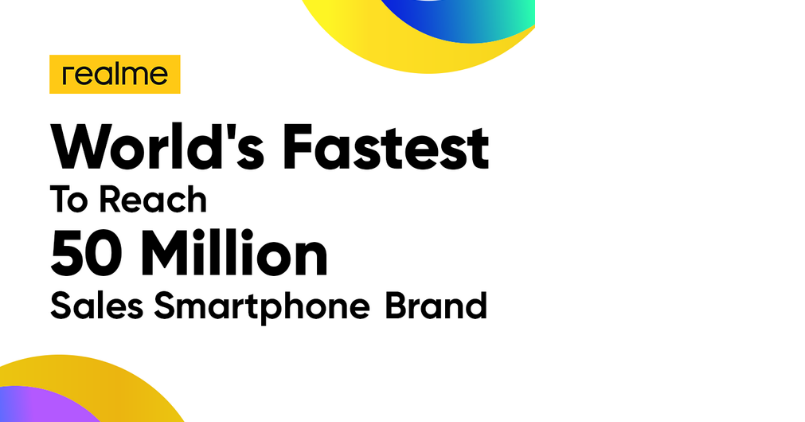 realme shipments hit 50 million up until the end of the third quarter of 2020. This makes the first fastest brand to achieve this mark since its inception, suggests Counterpoint Research. The industry analytics firm has put out new data, which includes global smartphone shipments of Q3, 2020. The data indicates that shipments in the third quarter grew by 32% QoQ (Quarter-on-Quarter) and dropped by 4% YoY (Year-over-Year). Since the coronavirus (Covid19) pandemic hit worldwide, there’s been a significant drop in smartphone shipments in Q3 (around 380 million units), suggests the report.

The research confirms that top OEMs, including Apple, Huawei, OPPO, Vivo, and LG, have undergone declines in Q3 due to the pandemic. But realme has seen the other end of the spectrum with 45% YoY growth including 132% growth QoQ in the third quarter of 2020. This growth in numbers suggests total cumulative shipments of 50 million until the end of Q3, 2020. This makes realme the first youngest and fastest brand to achieve the milestone since its inception. 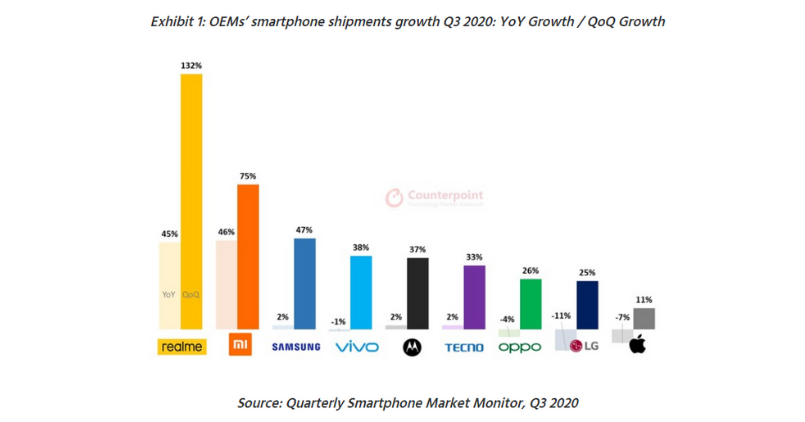 The report further reveals that it has surpassed top brands like Samsung, Apple, Huawei and its competitor Xiaomi to achieve this mark. realme, since its inception in 2018, has grown up to be an online-centric smartphone brand globally. According to counterpoint’s research, the realme’s focus on budget centric smartphones with cutting edge technologies, and targeted market strategy has made the smartphone to achieve this milestone.

realme has further clarified its shipments numbers for India. The company claims that it has managed to sell 30 million units in the country out of its 50 million units achievement globally. realme also points out that it had sold 6.3 million units out of 8.3 million units in India only during the ‘realme’ festive days of 2020. This marks a 20% growth from last year, confirms realme. It suggests that their creative marketing strategies indeed helped claim these numbers even during this pandemic scenario. Also, realme further claims to be the world’s fastest-growing brand for five consecutive quarters as per Counterpoint’s Q3 2020 report. 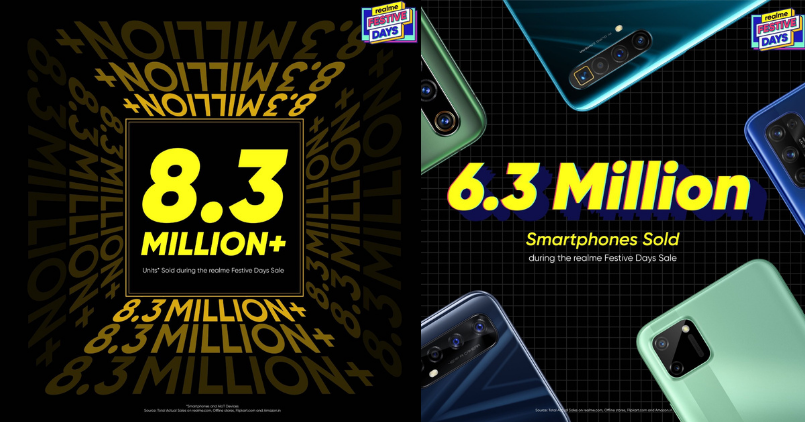 The report also points out that realme has seen a 300% growth in QoQ, in India, with its 15% share. Research analyst of Counterpoint Research also suggests realme’s aggressive product launches during the pandemic has made the company achieve this milestone. The products included realme 6/6 Pro/6i series, realme x3 series and also the new budget centric Narzo series as well.

It appears realme has also made significant achievements in its newly launched wearable tech. The company confirms that it has also achieved 22.1% market share when it comes to its wearable category in India. This makes them sit on top, according to IDC India Monthly Wearable Device Tracker — September 2020 data release report.