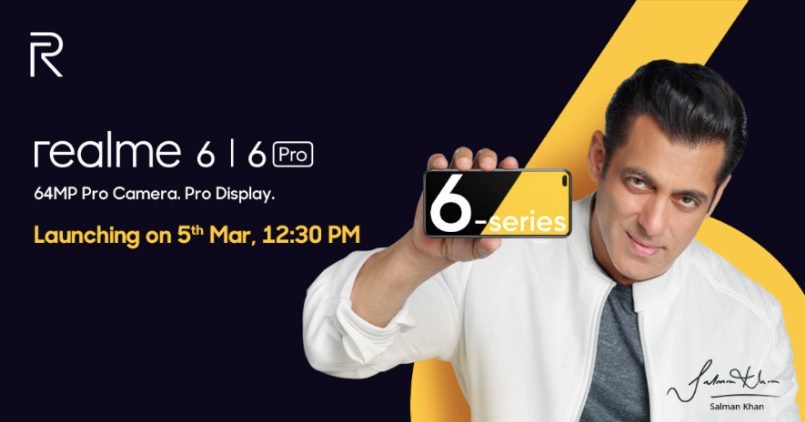 Realme does not want to stop launching products. After unveiling its most powerful flagship smartphone, X50 Pro, a day before yesterday. Today the company has already announced the launch of its next two smartphones. The Realme 6 and Realme 6 Pro is coming on March 5 as per the information shared by the brand on their social handles.

That’s not it. The young technology lifestyle brand has also announced a new ambassador for their brand. And it’s the most familiar face for Indians. Ladies and Gentleman, it’s Salman Khan. If Realme is aiming for face value, then they couldn’t have gone with a better brand ambassador.

Moving past my unnecessary opinions, Realme is going to launch two new smartphones in the first week of March. This has got to be a record for Realme as in just a week, it is already ready with two new phones. Let’s talk about them below.

Speaking about the official specification confirmation, Realme has shared that its new phones will have 64MP Pro Camera, which could mean a quadruple rear camera setup. Plus, if you look closely, the phone Salman Khan holding has a punch-hole dual-selfie camera.  Further, talking about the display, there are rumours suggesting we may see a 90Hz display on the upcoming Realme 6 Series smartphones.

What do you guys think about the Realme 6 series? Let us know in the comment section below.