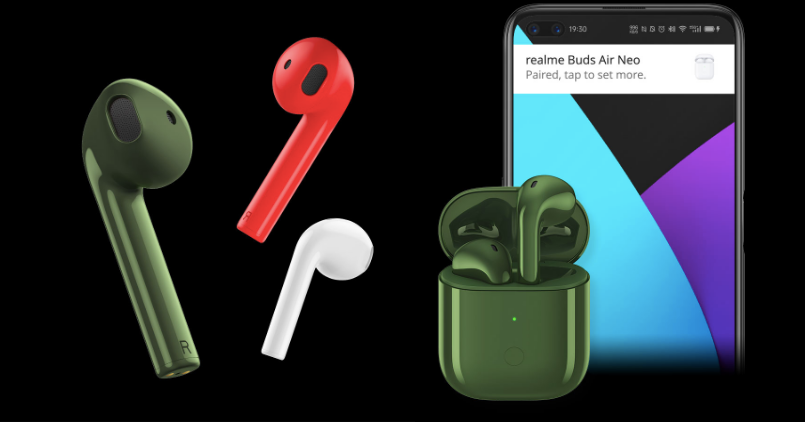 The Realme Buds Air Neo will be their second TWS earphones after the original Buds Air, which was launched late last year in December at Rs 3,999. The all-new Neo model comes at a price tag of Rs 2,999. The sale of the white colour unit starts today at 3PM. The primary difference is we know is the wireless charging feature is missing on the Neo model. Below we talk in detail regarding the all-new TWS from the house of Realme.

First of all, let’s talk about the colours, realme’s TWS offering is probably the only TWS which is available in shiny vibrant colours. The original Buds Air was released in three colours, now so does the Buds Air Neo. But instead of Black and Yellow, you get Red and Green options, while white remains common on both models.

These new Truly Wireless Stereo earbuds come with 13.2mm drivers with reportedly large bass boost functionality. Realme teases True Wireless technology, which is said to allow dual-channel transmission with Bluetooth 5.0 support. Further, with a low latency model, you can expect an up to 50% lower latency compared to normal mode. This is quite useful during gaming where any audio delay is intolerable.

With instant auto-connection, Realme reportedly claims it offers seamless connectivity to Android smartphones. As far as the controls are concerned, you get various touch control functions. Starting with double-tap to answer a call or play/pause music, triple tap for next song, press and hold one side to end calls. To enter/exit Super Low Latency mode, you have to press and hold on both sides. Those seem like pretty intuitive controls.

What do you guys think of the all-new Realme Buds Air Neo? Let us know in the comment section below.