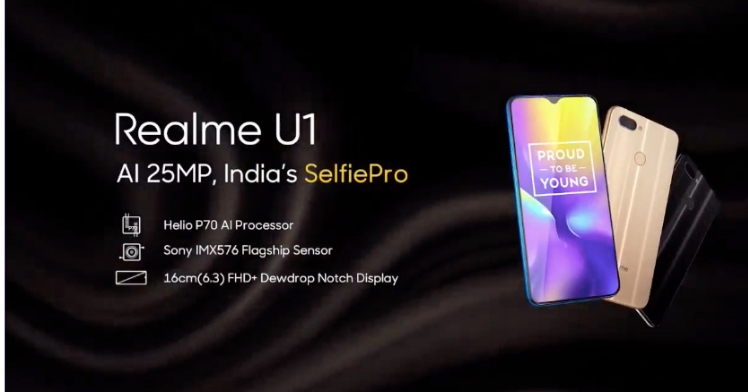 Realme, the young spun-off brand from the house of OPPO has taken India by storm with its powerful and affordable range of smartphone in under a year. And to take it to next level the smartphone brand has launched yet another handset in India today. It’s called Realme U1. After rebranding its logo, the company seeks to join an elite class of smartphone maker list that offers a premium smartphone experience at an affordable price tag.

Also read: Realme 1 and Realme 2 Pro users will soon be able to unlock their bootloaders

The new handset Realme U1 will retail in India at Rs 11,999 for the 3GB+32GB model. Whereas the 4GB + 64GB model will cost you Rs 14,499. The first sale of the device starts from December 5. It will be an Amazon exclusive smartphone unlike its other siblings, which are available exclusively on Flipkart. Interestingly, the first Realme phone was launched on Amazon India. With this, Realme has introduced its new series that goes by U. Let’s talk about the specifications of the device below.

Sporting a 6.3-inches 1080p display it claims to offer a pixel density of 409 PPI. The aspect ratio of the display is at 19.5:9. It’s a dewdrop notch design, which can be seen on the Realme 2 Pro. Thus, offering the maximum real estate for the best-in-class viewing experience. There is a 2.5D Corning gorilla glass 3 support for a possible protection from scratches.

Talking about the internals it will pack a MediaTek Helio P70 processor, thus making it the first phone to come with this new MediaTek processor. It is said to offer better AI and power efficiency capabilities than its predecessor, i.e. Helio P60. If you recall, the first Realme smartphone was offered an Helio P60 processor. After that Realme introduced three smartphones with a Qualcomm processor. Now the company is back to using MediaTek processor on its flagship device. The Realme U1 will be coming in two configurations, 3GB + 32GB, and 4GB + 64GB.

Realme U1: Is it India’s Selfie Pro?

Let’s see what it has in store for us in terms of the camera department. Well, cameras are actually the highlight of the smartphone, as the company is teasing it as India’s SelfiePro. The selfie experience is powered by a 25MP resolution shooter, which is a Sony IMX576 sensor with f/2.0 aperture. Whereas on the front you get to see a dual rear camera setup with 13MP + 2MP setup. Here the primary lens is of f/2.2 aperture and the secondary lens is of f/2.4 aperture.

As far as the connectivity features are concerned, it offers all the standard connectivity features including 4G VoLTE, Wi-Fi 802.11/ac, Bluetooth 4.2, GPS, 3.5mm audio jack, dual SIM slots, dedicated microSD card slot, and micro USB port. All this is powered by a 3500mAh capacity battery. It will be running on the ColorOS 5.2 based on the Android 8.1 Oreo OS.

Realme has introduced two new accessories today. One is its Iconic case to keep your Realme U1 durable, and a set of earphones dubbed as Realme Buds. Both of these accessories would retail in India at Rs 499. Would you be interested in buying the new Realme U1 smartphone in India? Let us know in the comment section if it interests you or not.