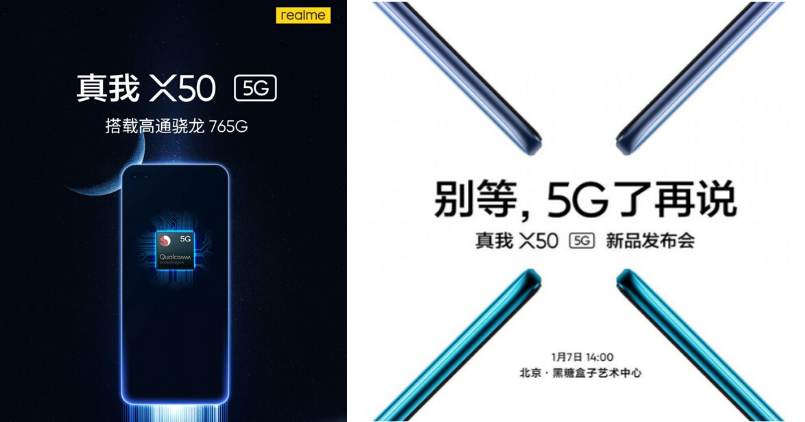 Realme has quickly gained great popularity amongst smartphone lovers across the globe for its philosophy of providing flagship features at aggressive pricing. With the introduction of the new Qualcomm Snapdragon 765G, realme is advancing towards launching its new range of 5G phones. The first one being the realme X50 5G, which will now be announced on January 7.

The company has confirmed this with a post on Weibo that realme X50 will finally make its debut on January 7. The phone will be powered by the Snapdragon 765G processor and will feature VOOC 4.0 fast charging technology. The company claims that the X50 can be charged from zero to 70% in 30 minutes. The phone will also feature a dual punch-hole display. There are no details about the panel.

The company has also revealed that realme X50 5G will also feature an 8mm 410mm³ diameter liquid cooled copper tube for heat dissipation that offers five-dimensional heat dissipation that completely covers all the heat sources. As far as 5G capabilities are concerned, the phone will come with support for 5G standalone and non-standalone (SA/NSA) sub-6GHz networks.

Also read: Realme X2 review: Consolidating the mid-range with yet another winner

The company had recently launched the realme X2 with an improved 30W VOOC 4.0 Flash Charging and a 32MP selfie camera. Along with X2, the company also launched its first truly wireless earphones, the Realme Buds Air. Are you guys excited for the next Realme smartphone launch? Let us know in the comments section below.