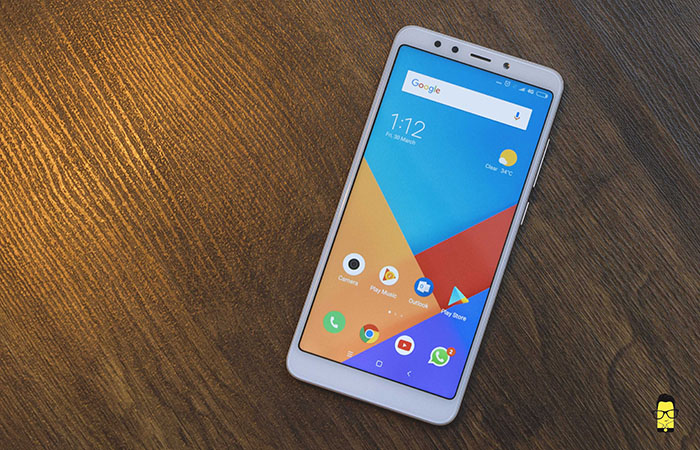 Xiaomi has completely taken over the Indian market, not just in market share but by entering the hearts of the masses as well. The Chinese brand has become a household name in the country and is the only company that comes to mind when people say flash sales.

Generally, Xiaomi is pretty clear in its product strategy and has well-defined market segments. However, this year things seem to be a little too confusing. In the budget segment starting from Rs 5000 to Rs 15000, you have the Redmi 5A, Redmi Y1 and Y1 lite, Redmi 5, Redmi Note 5, Redmi Note 5 Pro, and Redmi 4A as well.

While almost all these phones seem to cater to one or the other market, there’s one that just sits right in between all of them with no clear distinction. That is the Redmi 5 – a typical budget smartphone with a little too much competition, especially from its own brothers.

A quick glance at the smartphone industry and you’ll realize that smartphone designs have reached a saturation. From premium flagships to the budget handsets, they all look the same and so does the Redmi 5. It looks like any other Xiaomi phone clearly with the compromises that come with the price. The body is mostly plastic and comes with a metallic finish. The plate on the back, however, adds a lot of sturdiness to it also adding a touch of premium. But, that’s where all the “premium-ness” ends. 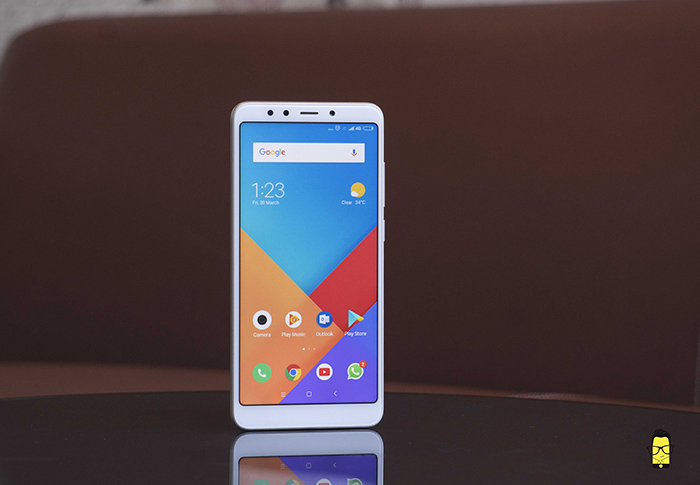 It is not an expensive phone and that’s exactly how it felt, unlike some other Xiaomi phones, that look like they should have a higher price tag. I did not experience any creaking, which is a very good thing considering that it’s mostly plastic.
The buttons are also very well built and have a good click. It charges through a Micro-USB port, which flanked on both sides with speaker grills with only one of them actually housing a speaker. The sound is okay at best, it distorts slightly at the highest volume, but it’s still usable. The 3.5mm jack sits at the top with an IR blaster. I didn’t really get to use the IR blaster a lot, but it works exactly like any other Xiaomi phone with an IR blaster, you get the same apps and exact range of devices you can control.

I’ve said this a few times earlier, but I am really impressed by how well the price of good quality LCD displays has come down. I bring it up here because the Redmi 5 is blessed with one such panel. The display is one of the best things on the Redmi 5. It’s bright and colorful. The black levels are not great as is standard for an LCD panel, but still good enough for a phone at this price. The aspect ratio is also the trendy new 18:9, which adds to the overall look. I didn’t feel like the 18:9 aspect ratio gave me a lot of extra screen space, but I just like the smaller bezels, and multitasking feels a little better on a taller display. 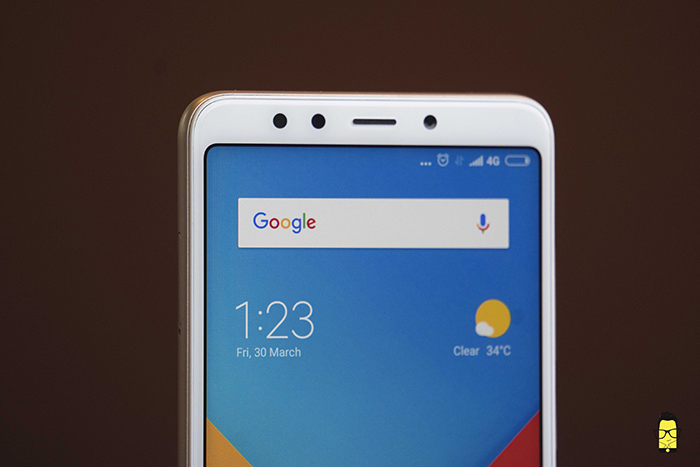 Everyday work looks excellent on this display and at times I was very surprised to see how good it looked even compared some other more expensive options. The 720x1440p resolution is really visible when you play games or watch a very high-quality video. However, this is far from a deal breaker, at this price this is one of the best displays you can find.

Redmi 5 Software: not for Mi!

The Redmi 5 runs on MIUI 9 built on top of Android Nougat. The Android version, however, won’t be much of importance here because the MIUI skin over it is so damn heavy that you won’t feel the difference. That is, however, also an advantage because then they don’t have to worry about Google giving out updates. Xiaomi will update and upgrade without changing the underlying software. So the MIUI experience on a device running Nougat and Oreo would be pretty much the same. 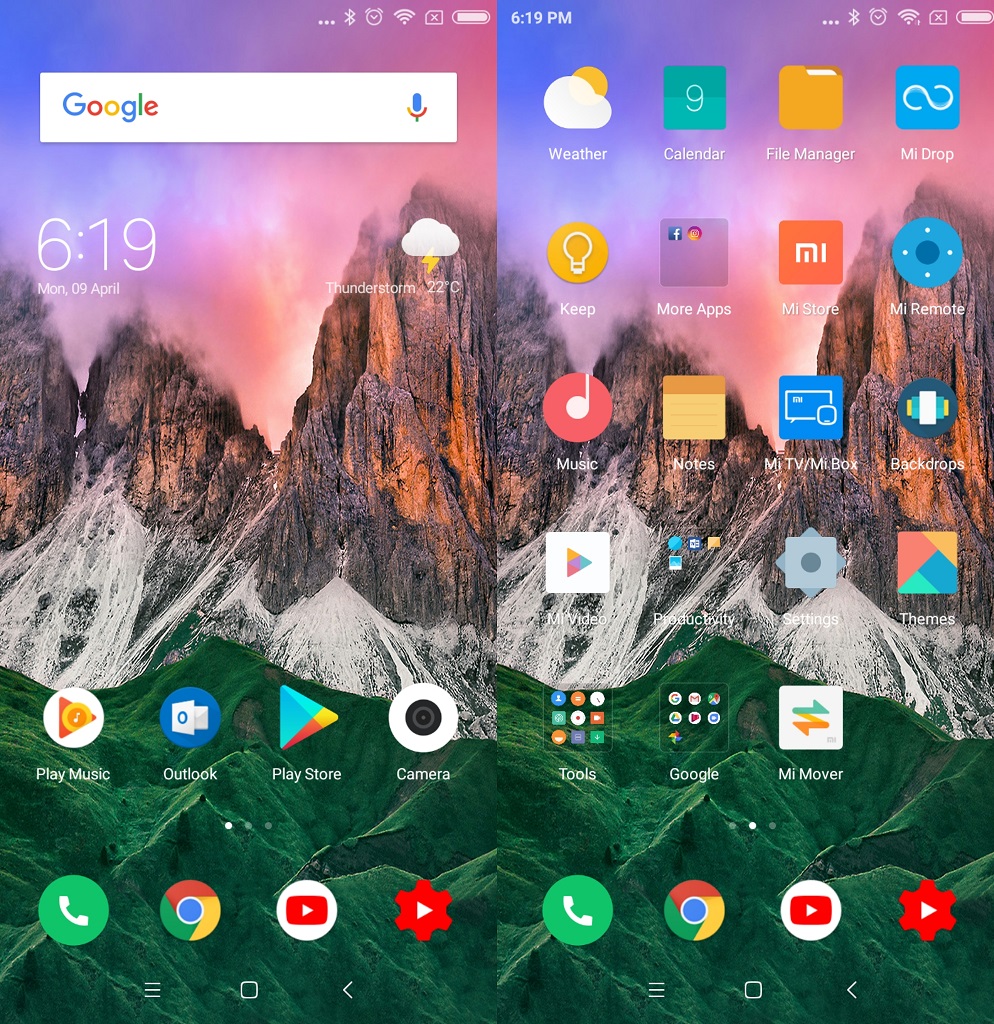 When it comes to MIUI there are a lot of things I like, and a lot that I don’t. I surprisingly like the look of it. It is one of the best OEM ROMs coming from China. It has an iOS-y layout but I still like it. It doesn’t look half finished like some other company’s software. It’s easy to navigate through and over the years is one of the most evolved smartphone ROMs for sure. Some of the features packed inside, which have been there for a long time on MIUI are so genius, like the app shifting capability between different screen by just holding it in place. You get a theme store where you can choose from millions of themes which changes everything from app icons to the notification and settings panel. 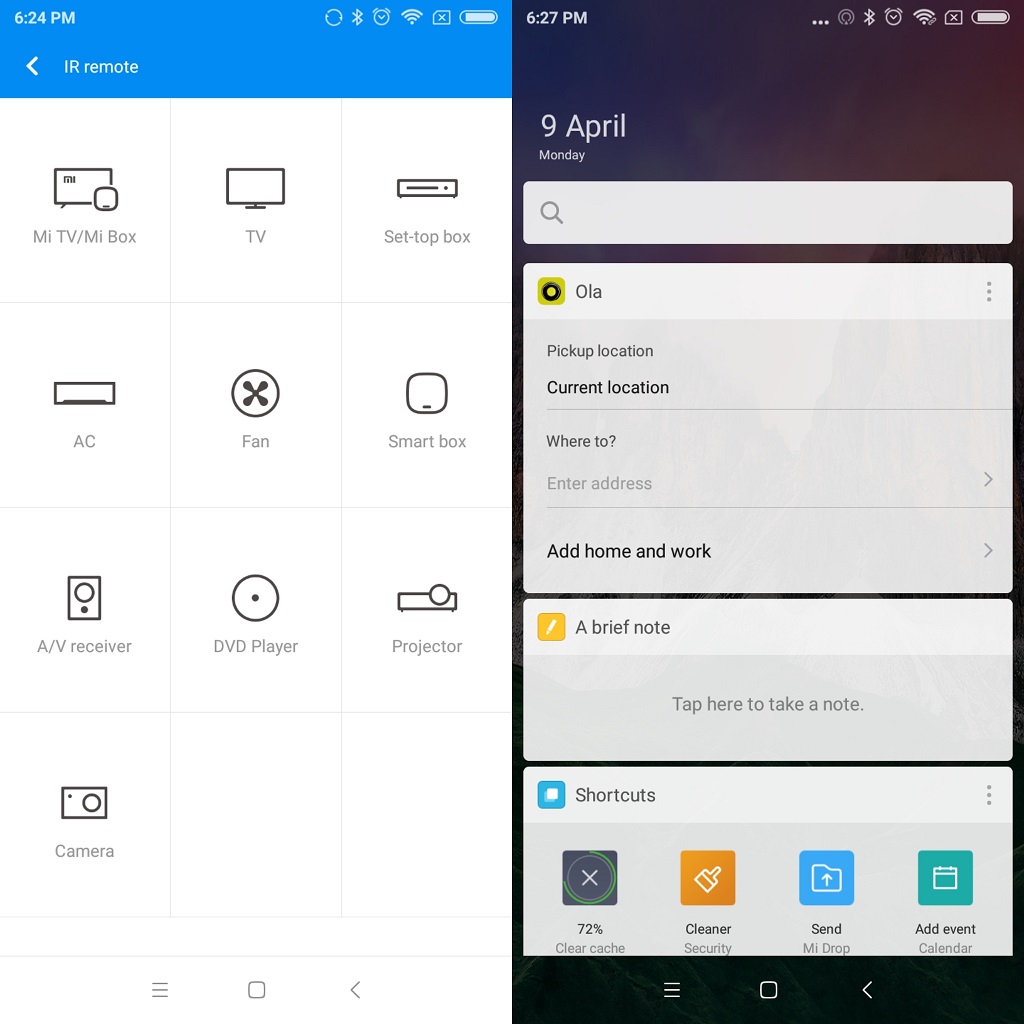 I am also digging the whole UI with all the small animations and wireframe designs looking extremely classy. There is also a very cool screen to the left of the home screen and while it’s not a Google feed, it hosts a few useful widgets. You can book an Ola straight from here, take down a few notes that will always remain there and many more such tasks. All these little-refined touches make it unarguably one of the most well-designed ROMs in the world. 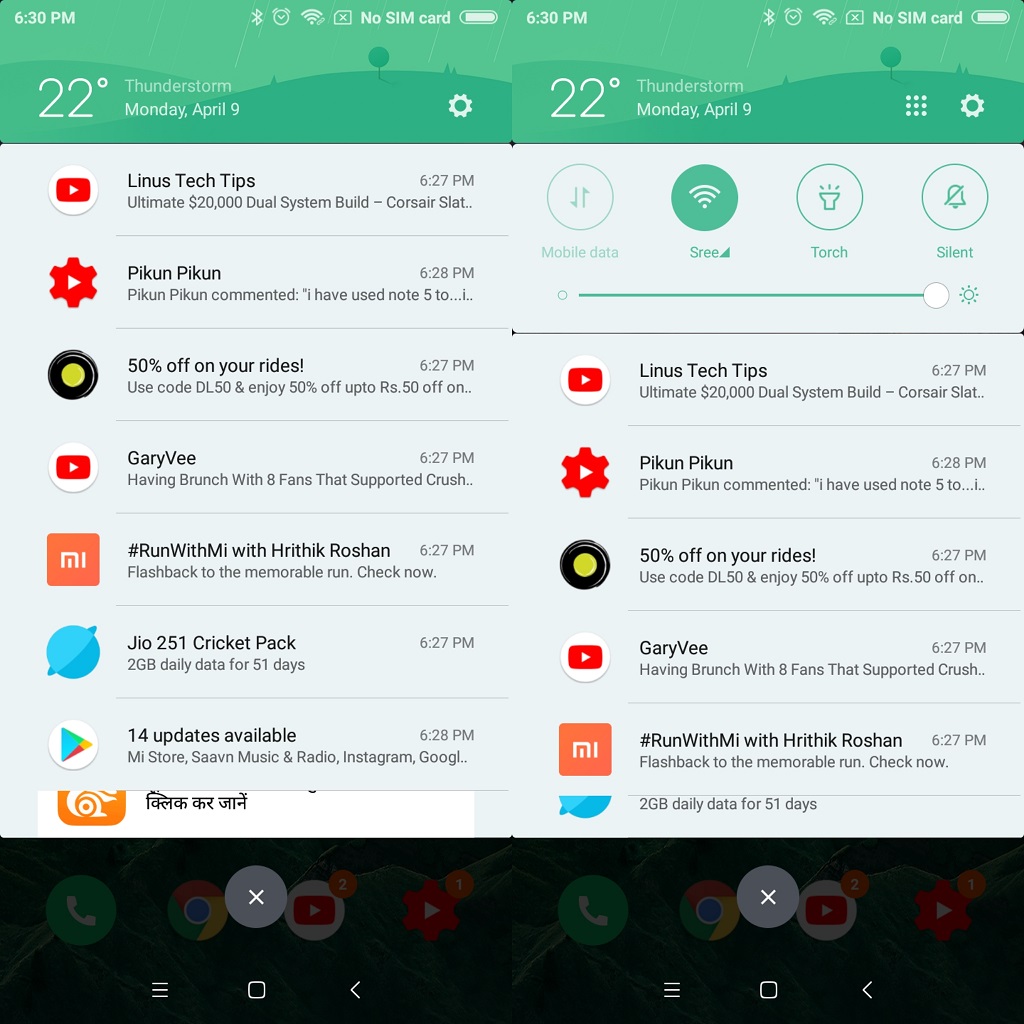 However, it’s not all hunky dory, there are some things about MIUI that annoys the hell out of me. The first and major one is the notification panel. It’s so poorly managed. The notifications stay there individually and not grouped. If you have a lot of them then there’s no way to know without scrolling up. Then there’s the notification expansion, it’s the most unintuitive executing I’ve seen. The frustration is probably more because I’ve used the Android notification panel and it is a dream. I never really appreciated them before using MIUI. Another argument could be that another popular OS that MIUI might be inspired by too suffers from the same problem. There are a few instability issues apart from this, but nothing that is massively problematic or long-lasting. 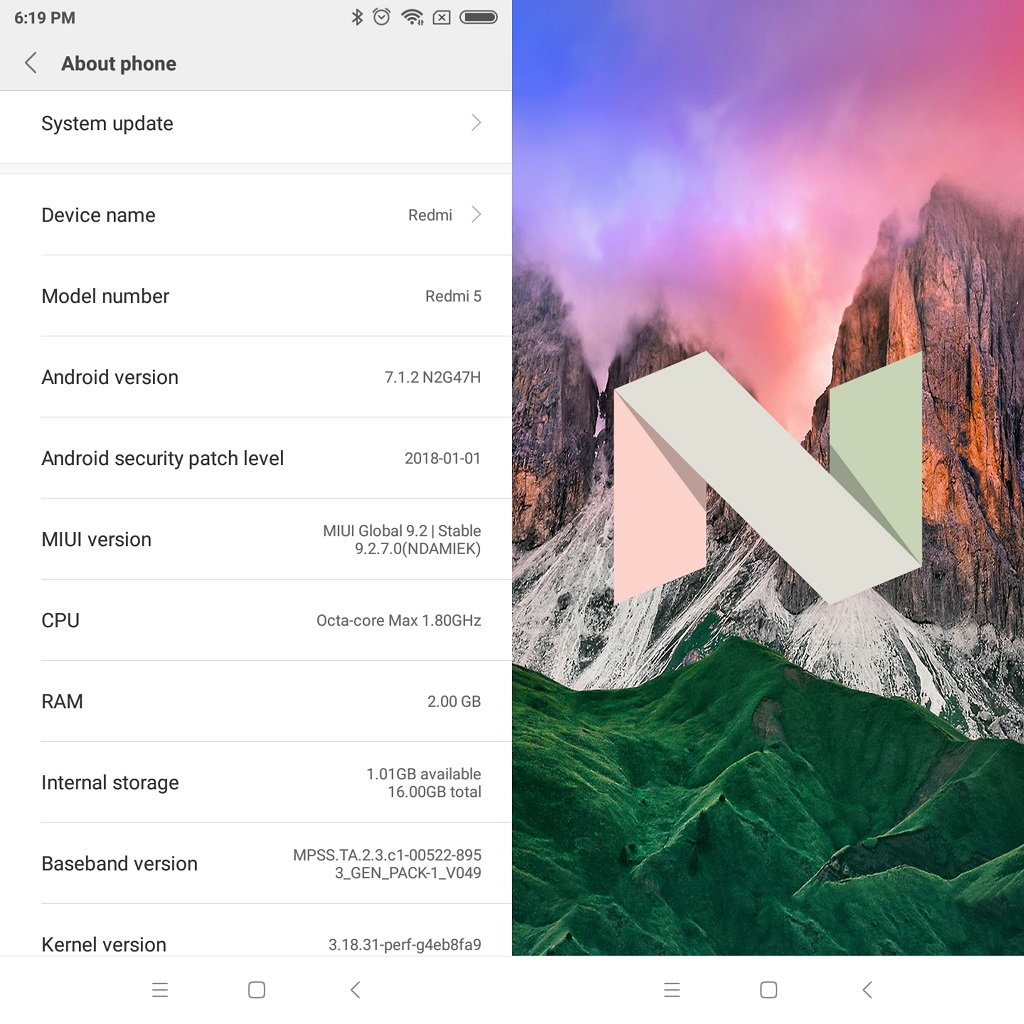 Overall the software is quite good with a few things that I don’t like, but if you are fine with it then I think the software experience is A-OK.

The Redmi 5 has a Snapdragon 450 inside which is a standard mid-range processor from Qualcomm. It’s an octa-core chipset with Cortex-A53 architecture inside. Well, in layman terms, it’s an okay-ish processor. The performance I encountered was very average. Surfing through different apps getting my day-to-day job done felt smooth, but multitasking suffered a bit. That’s also probably because we have the 2GB RAM unit.
Gaming on it was also not bad, I consistently got good frame rates on it, but that isn’t impressive enough. Even jumping between different settings inside these games were laggy and the loading times were average at best. I can’t say anything about the 3GB RAM variant because I haven’t used it, but if you are looking to buy the Redmi 5 then surely skip this one and go for the higher RAM version. Or better yet buy the Redmi Note 5 3GB RAM variant for Rs. 9,999. The Antutu score for the Redmi 5 is around 66,000, which is exactly what is expected of the SoC at this price. 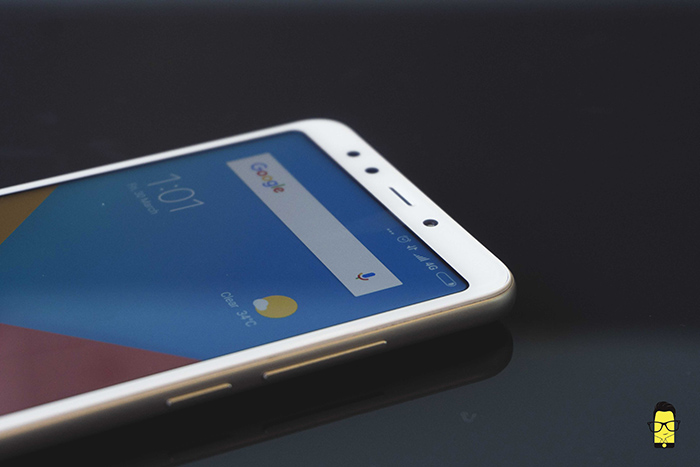 Overall, it’s an average performing phone and I would strongly advise to chose a different phone or at least a higher RAM variant if you can.

Redmi 5 Camera: good for the price 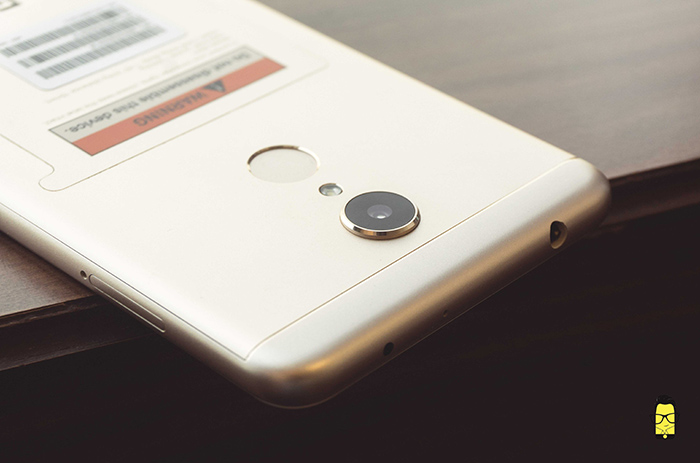 The camera of the Redmi 5 is above average. It takes some pretty looking pictures. The rear camera is a 12MP sensor with a f/2.2 aperture. The pictures are nothing to boast about. They look just fine in good daylight conditions, colors are rendered well and details are well preserved too. However, things start looking real when the light gets low. The pictures come out very unappealing with lost details and blurry details. The auto-focus is also very off in these situations. 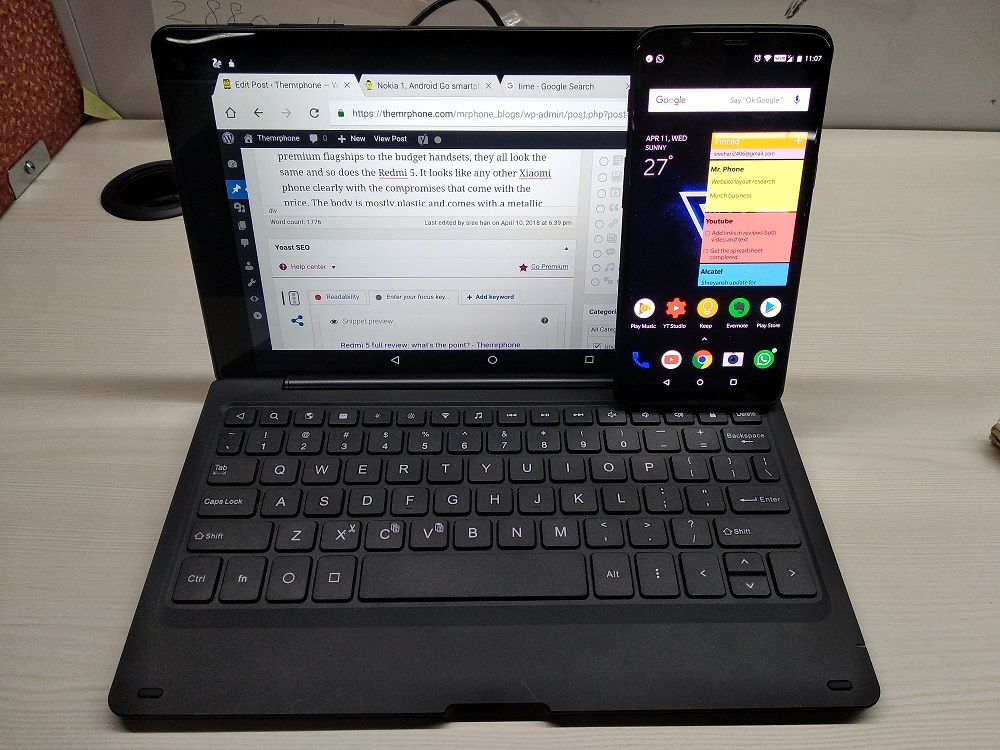 The price segment that Redmi 5 starts at is definitely not where you find good cameras, however, there are a few that perform better than this one. The Infinix Hot S3, the Smartron T.phone P, and the Redmi Note 5 which has a larger sensor size, all perform better than this at not much of a price difference. The front camera is also just fine. It’s not a selfie first phone, and there are a ton of them at this price range, so if selfies are your thing, look elsewhere. 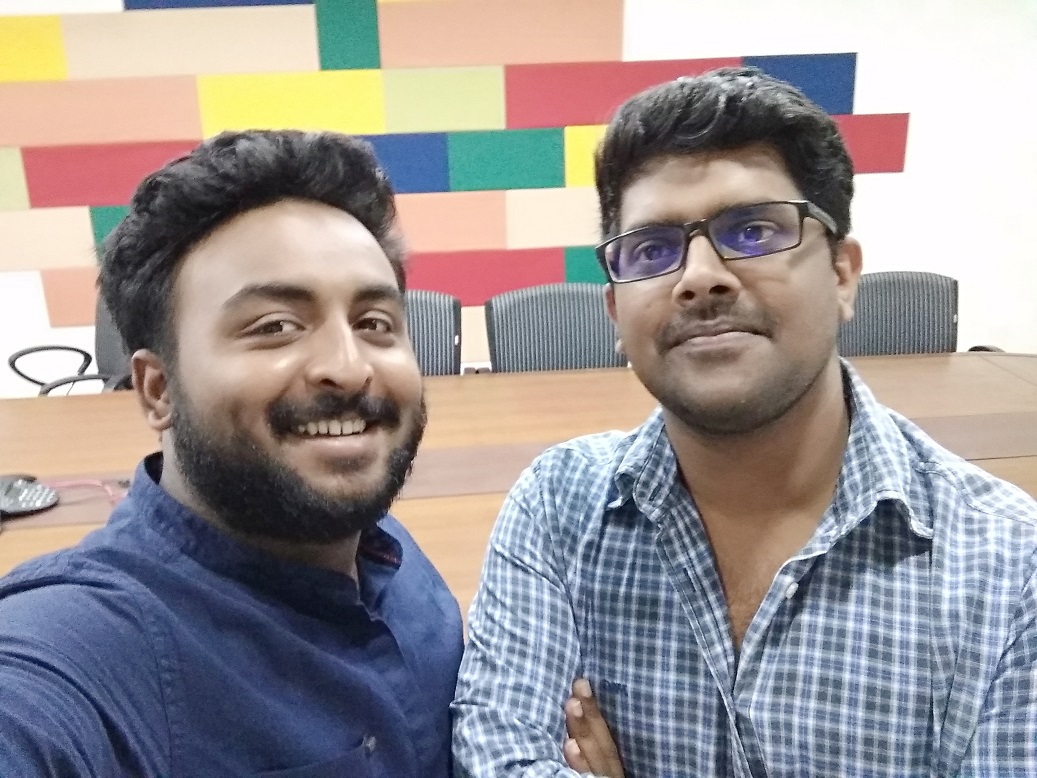 Click on the image to take a look at full-size images taken from the Redmi 5.

The battery life of the Redmi 5 is probably the second best thing after the display. It comes with a 3,300 mAh battery, which is a very good size for the Redmi 5. The Redmi 5 doesn’t have the biggest display, nor is the resolution high and the Snapdragon 450 is not a power hungry processor, which means that on-paper the 3,300 mAh battery should last very long. And, it does. The Redmi 5 easily lasted me a full day, and at times went for a day and a half without needing a single charge. 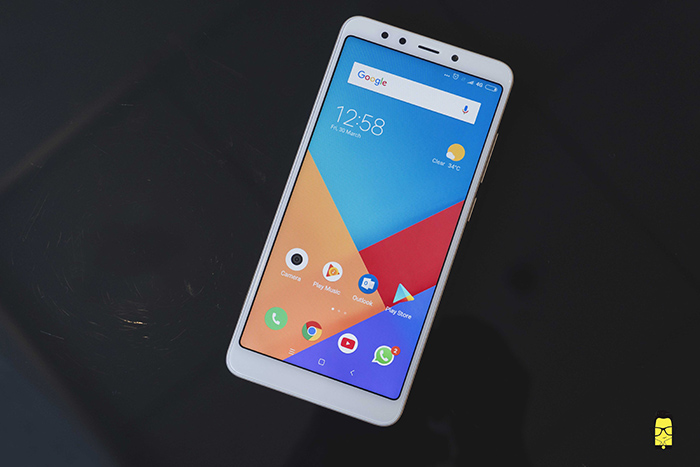 Apart from all this, the call quality is also another pain point on the Redmi 5. I can’t stress enough how uncomfortable my experience with the Redmi 5 was. The calls got disconnected regularly and the audio was muffled on the other side. The audio recording is also below average. If these things are important to you then this is definitely not the device to buy.

If you are looking to buy a device under Rs 10,000, what should you go for? If you are looking for a super budget Redmi device then the Redmi 5A is the phone to go for. If you are looking for a selfie-centric phone then the Redmi Y1 and Y1 lite are there. Now, if you want a powerful device then the Redmi Note 5 (3GB RAM) is the best Redmi phone you can buy. So where does the Redmi 5 fit in all this?
The Redmi 5 confuses me because I don’t see a clear target audience here other than the people who want an 18:9 display with everything else being average. The Redmi 5 is priced at Rs 7,999 for the 2GB/16GB version and Rs 8,999 for the 3GB/32GB version. I personally would recommend you to buy the Redmi Note 5 (3GB RAM) because it is way more powerful and also has a better resolution display and camera too.
Overall though, the Redmi 5 is a very average phone and it seems like it’s there just to make the others look good.