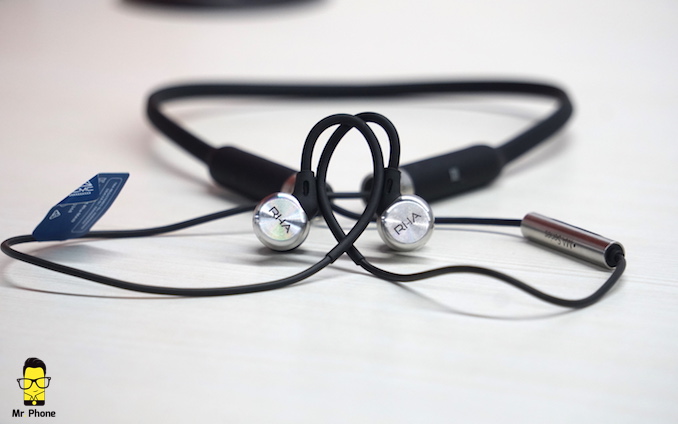 One of my favourite tech journalists – Vlad Savov – tweeted recently: “I’m trying hard to avoid the thinking that Europe is becoming irrelevant in consumer tech. We don’t have anything approaching the scale of a Google in software or Samsung in hardware. We matter only as consumers, and that’s shrinking as India + China consumer base grows.”

It is easy to understand that sentiment. Maybe the Europe innovation engine might not have produced a company at the scale of a Samsung or an Apple, but the UK has given us RHA and they should be proud.

RHA is an independent brand from the UK that makes some of the most exquisite audio products. In fact, the brand – in partnership with HeadphoneZone in India – has found a massive audience thanks to sensible pricing. On one of my visits to HeadphoneZone’s cozy yet frenetic office in Mumbai, I saw the RHA 390u – the company’s flagship budget earphones – flying off the shelves by the dozen every hour. In fact, my colleague Avica swears by these earphones.

Therefore, I must admit I was excited beyond measure when a review unit of the RHA MA750 reached us. I had the pleasure of listening to these gems at IFA in Berlin last year, and my first impressions were supremely positive. And after using the MA750 as my primary source of audio bliss for a little over two weeks now, I am considering purchasing it for personal use. Yup, these earphones are that good! 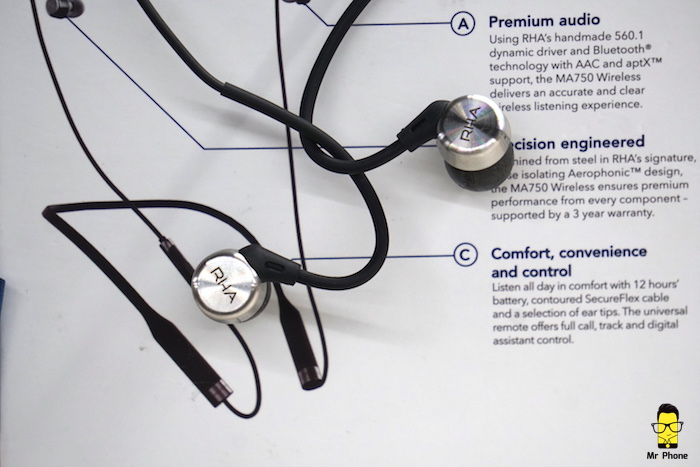 From the very first time you open the box, you know that RHA isn’t kidding when it comes to quality. You will notice the impeccable stainless steel construction of the earphones. The RHA MA750 is a pair of neckband style in ear earphones. The neckband itself is made of flexible rubber and it terminates at two big capsules. One of these capsules holds the battery and the USB Tupe-C port for charging. I am very glad that RHA has decided to go the Type-C route for charging the MA750.

The neckband is attached to two individual strands of wire which terminate at the ear-hooks. These hooks managed to sit comfortably in my ears. I used the bundled medium-sized Comply Foam ear tips and didn’t face any fatigue whatsoever even during long listening sessions. By the nature of its fit, the MA750 achieves some level of passive isolation and if you crank up the volume above 60 percent you won’t hear a thing of what’s happening around you. 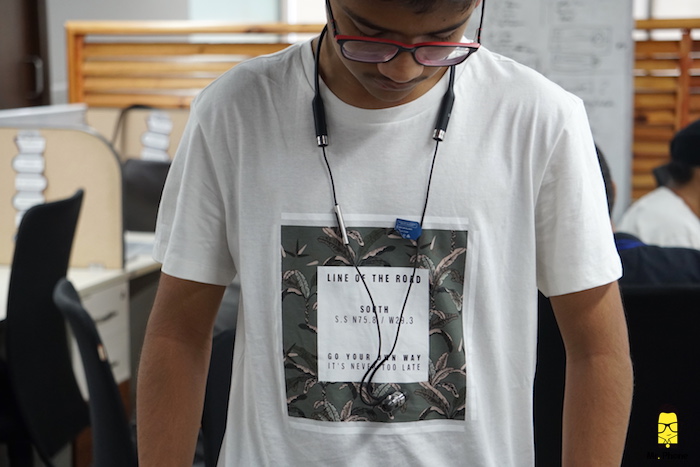 Moreover, what’s cool is the stainless steel housings are magnetised and therefore you can hang it around your neck without worrying about the wires flopping around while walking or running. Talking about running, the RHA MA750 is sweat and waterproof with its IPX4 rating. So, gym-enthusiasts are going to love the RHA MA750. I tried walking in full pace with these on, and they wouldn’t budge. While you can pair using Bluetooth, RHA offers you the option of using NFC to connect to any device with support for the standard. What’s even better is that the RHA MA750 maintains a rock solid Bluetooth connection. You also get support for aptX audio format provided your device supports it. This means that you will notice a slightly better audio fidelity over wireless for sure.

The RHA MA750 comes with a built in remote control. This control can be used to play/pause music, or increase and decrease the volume. Furthermore, you can long press the play button to actually trigger the voice assistant on your phone. Which is Google Assistant on Android and Siri on an iPhone. I’ve tried it and can confirm that it works like a charm. 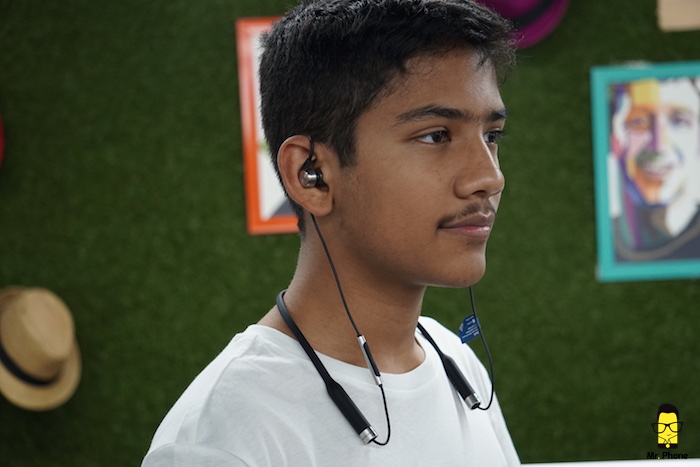 The MA750’s sound signature is easy to define. These are wireless earphones tuned for purists. I know a lot of extreme audiophiles will continue to disagree that wireless audio is made for plebs, but trust me when I say this – the MA750’s sound has plenty of detail and resolution.

While the timber is not on par with its wired counterparts in the same price range (for ex: FiiO F9 Pro), you do get a crisp sound signature with an emphasis on good treble response and clean mids. The bass is fairly tight but it is feeble. There’s no weight to the low end and EDM fans are bound to be disappointed. For example, in the Kygo and Selena Gomez hit It Ain’t Me, the finger snapping in the background is much better resolved by the RHA MA750 than the thumps. 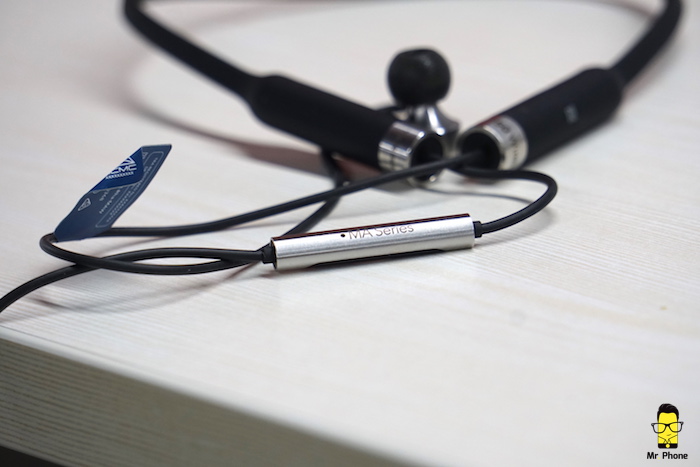 The MA750’s main attraction is its wide soundstage. Jacob Collier is probably one of the most talented young multi-instrumentalists in the world today and his song Hideaway is an extremely complex composition. Many wired earphones, let alone wireless, struggle with the soundstaging and instrumentation but the MA750 just shines through and through. From Collier’s husky vocals to the guitar riff, you will be able to distinguish each note without much trouble. The MA750 also manages to resolve transitions between different sounds with consummate ease. The MA750 manages to control the treble peaks and I didn’t hear any sibilance either. My only concern was the MA750 added no weight to the low end frequency whatsoever.

Also read: Sennheiser Ambeo review: one of the most innovative tech products to hit India in a while

In all, you will love the signature of the MA750 if you are a fan of a clean analytical sound. Also, I consumed hours and hours of podcasts on the MA750 thanks to its stellar reproduction of vocals. Talking about consuming hours, the MA750’s battery lives up to its promise of 12 hours of battery life provided you are listening to music at 60 percent volume. Very impressive! 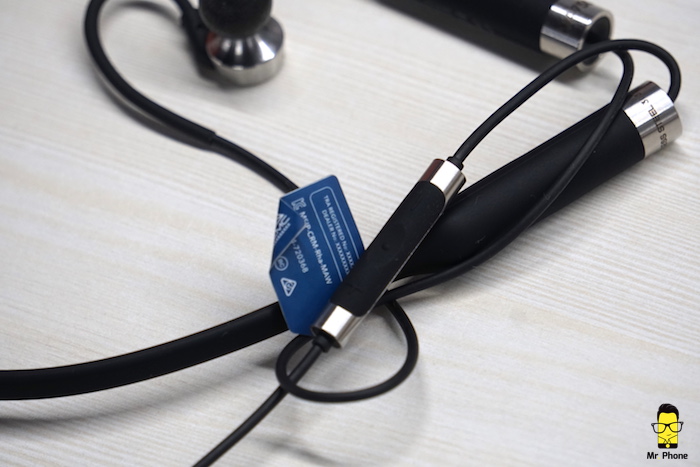 The RHA MA750 is an anomaly in the world of wireless earphones. It offers a clean and crisp sound signature with a wide soundstage. The enhanced focus on clean treble response and tight mids means that the MA750 is targeted at audiophiles willing to experiment with portable wireless gear. I doubt if that subset is big, but I am sure the freedom from wires is definitely tempting. On the contrary, if you are a fan of modern day pop music or EDM, you can seriously look elsewhere…maybe in the direction of the V-Moda Forza Metallo Wireless. 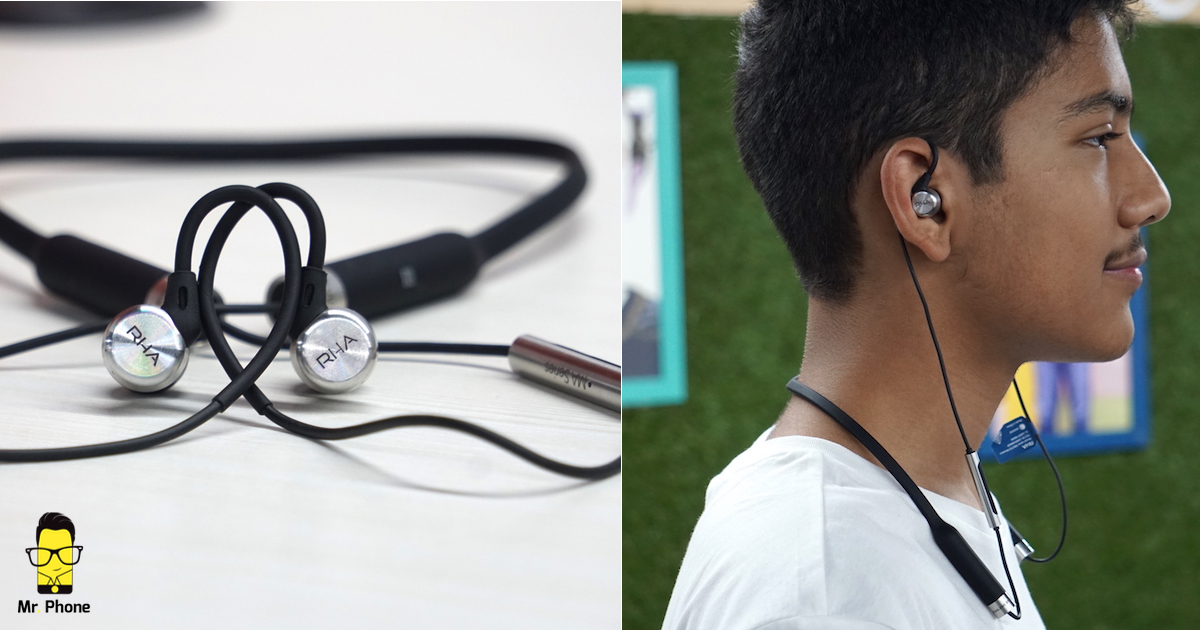 At its current asking price of Rs 11,999, the MA750 competes with the likes of the Metallo Wireless, Beats X Wireless, Apple AirPods, and the Sony WF-1000X. The AirPods and the Sony options are truly wireless audio gear, a tech that – in my opinion – is still in its infancy. And to be entirely honest, the MA750’s signature is leagues better than that of the Metallo Wireless and the Beats X – both of which are neckband-style options.

Seriously, just buy the RHA MA750 if you are looking for a pair of audiophile-grade handsfree wireless earphones. In fact, south of Rs 15,000, the MA750 is my favourite wireless in-ear earphones by far.

(A note to our readers: In case you decided to buy these earphones after reading our review we urge you to use our affiliate link to make the purchase. However, we can assure you that our reviews are completely unbiased.)