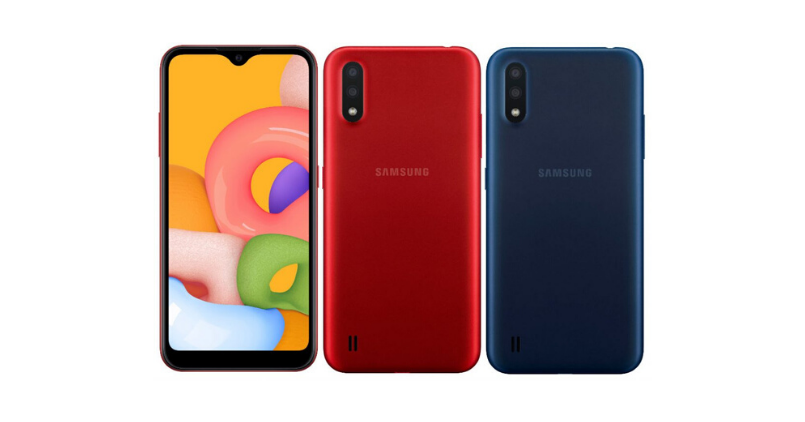 Samsung has added another budget smartphone in its ‘A series’ with the new Samsung Galaxy A01. After revealing the Galaxy A51 and A71 series, which are its 2020 handsets, the brand has now launched another A-series smartphone. Let’s take a look at the features and specifications of this new Samsung entry-level handset.

Samsung Galaxy A01 – Features and Specifications

The smartphone features a 5.7-inch Infinity-V display with a 1520 x 720-pixel resolution. The Galaxy A01 runs an Octa-Core processor. The name of the processor is still unknown but we are guessing that it’s going to be the Snapdragon 439. There’s a 2GB RAM and a 16GB on-board storage, which can be expandable via microSD card slot.

In terms of software, you get Samsung’s homegrown One UI based on Android 9 Pie. Samsung has started putting efforts towards providing regular software and security updates for all its smartphones. We hope the same for the Galaxy A01. In terms of the optics, the Samsung Galaxy A01 comes with a 13MP + 2MP Dual Rear Camera with f/2.2 aperture. The selfies are taken care by a 5MP front camera with f/2.0 aperture.

The smartphone has a 3000mAh battery which should last till the end of the day during everyday usage. You get a triple SIM card slot which means that you can use two 4G SIM cards and 1 microSD card at the same time.

The Samsung Galaxy A01 comes in 3 colours – Black, Red, and Blue. There’s no information regarding the price and availability of the smartphone. We expect it to arrive in India by next year.

What are your thoughts about the Samsung Galaxy A01? Let us know in the comments.