Samsung Galaxy A2 Core could cost Rs 5,290 in India 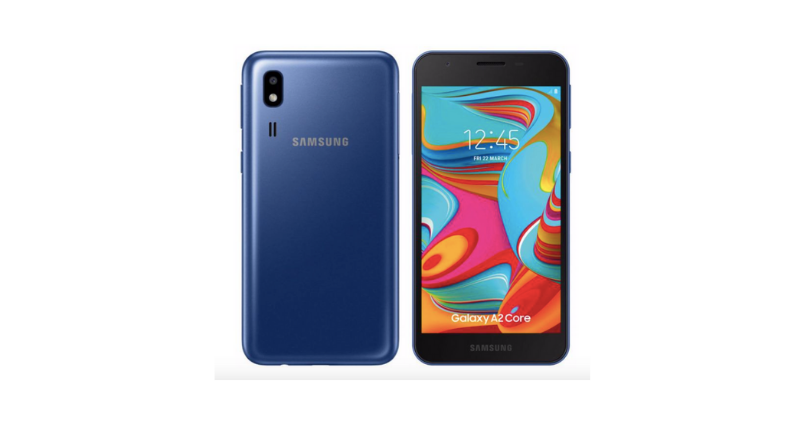 Yesterday, Samsung conducted a huge global event where the brand announced a couple of new handsets including first time – Galaxy A80 and A70 made an official appearance. While the craziest handset is believed to be sliding & rotating camera-enabled smartphone, A80, an entry-level handset felt completely left out. We are talking about the Galaxy A2 Core.

It was heavily believed to be getting an official announcement on stage, but unfortunately, it didn’t make the cut. Said to be the second Android Go Edition handset from Samsung, after J2 Core introduction last year. As we know the company has officially sacked its J-series across the world, and thus the A2 Core could be hailed as the successor to the J2 Core.

Said to sport a 5-inch qHD resolution display, its dimensions could be at 141.5 x 70.9 x 9.1mm. Adorning a glossy back cover, it is likely to introduce a completely plastic body. Of course, running on the Go Edition, expect Android 9 Pie based Go Edition with a pre-installed lighter version of Google apps.

As far as the internals are concerned, it could house an Exynos 7870 processor, which will clock at 1.6GHz. It could be supported by a 1GB of RAM and 16GB of internal storage. There is no mention of the expandable storage, but expect it to be provided.

The camera department shall bring a single 5MP rear shooter and a 5MP selfie snapper on the front. While the rear camera would sport an f/1.9 aperture the front lens will have an f/2.2 aperture. According to the report, expect a Make for India feature dubbed as Smart Manager. Additional features shared includes a Beauty mode for the camera.

The Samsung Galaxy A2 Core could arrive in three colours including Red, Dark Grey, and Blue. All this could be powered by a 2600mAh capacity battery.

Sporting a model number A260GG, the Galaxy A2 Core could be released in India for a price of Rs 5,290. For a perspective, the J2 Core was priced at Rs 5,999 and is down to Rs 5,490. What do you guys think of the upcoming Galaxy A2 Core? Let us know in the comment section below.