Home | Reviews  | Samsung Galaxy A50 review: the most premium smartphone experience under Rs. 20,000

Samsung Galaxy A50 review: the most premium smartphone experience under Rs. 20,000 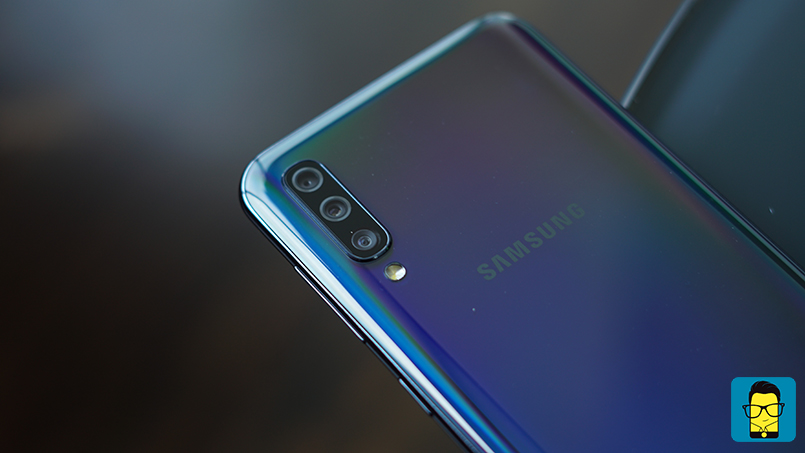 Samsung has been at the top of its game when it comes to flagship smartphones. However, at least until last year, their budget phones weren’t well-received by the Indian audience primarily because the price-to-performance ratio wasn’t great. One major reason is that offline sales of its smartphones contributed to maximum cash inflow for the Chaebol in our country.

With the beginning of 2019, Samsung has decided to get their online game under control and out came six new phones. The latest of which is the Samsung Galaxy A50.  The A50 is also the most expensive of the six devices, and it sure looks the part. So, let’s jump into the review and see if it’s worth it. 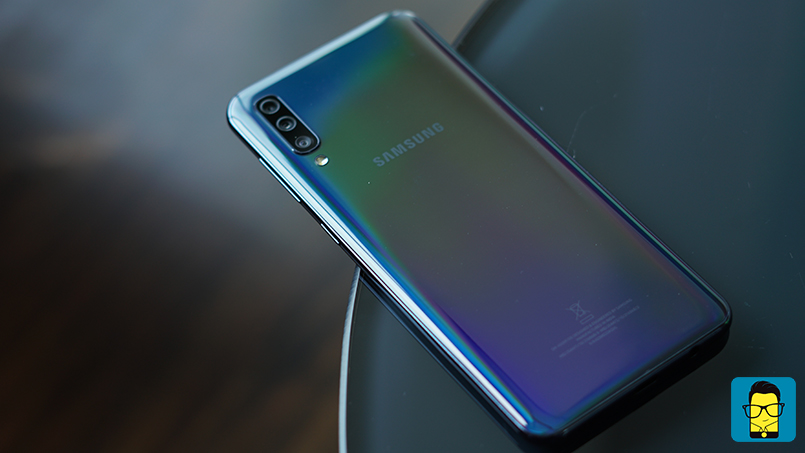 Samsung makes refined flagships with stunning looks but, up until the Galaxy A50, the design of its affordable phones was as basic as it comes. The Galaxy A50 is the most expensive Samsung phone under Rs 20,000 and it sure does look the part. The thin form factor successfully hides the fact that there is a 4000mAh battery inside. The rear has a very unique design that showcases an attractive-looking rainbow pattern. The feel of the material is really good and smooth as well, which makes it comfortable to hold.

The A50 is among the thinnest phones in its price category and it’s probably the best-looking polycarbonate bodies that you can get your hands on.

If you want the best display experience under Rs 20,000 then get the Galaxy A50. You can choose to skip this section if you want to because that statement explains it all. The Galaxy A50 sports Samsung’s Super AMOLED display that offers incredible contrast ratios and amazing punchy colors. Now AMOLED displays apart from having inky blacks and saturated colours also tend to be closer to the display glass which makes the icons look they are floating right at the surface. 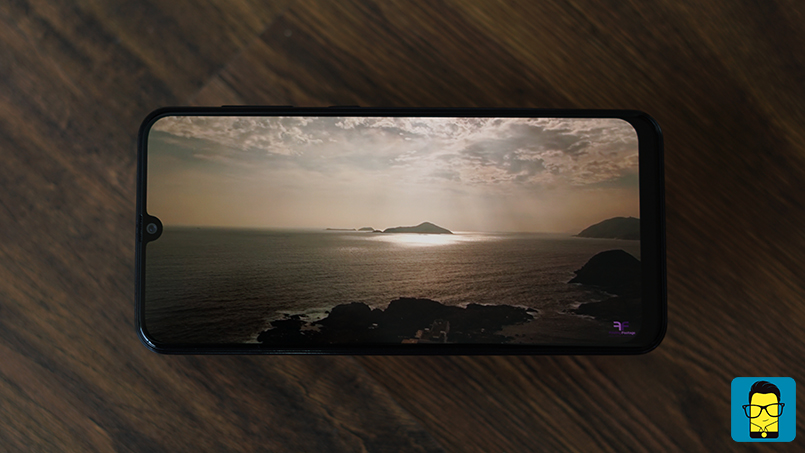 Under the AMOLED display is the optical fingerprint scanner that lights my finger green and then magically opens up my phone. But like how seeing a magic trick 20 times in a day does wear the astonishment out, it comes down to if it is fast and reliable enough for everyday use and I’d say it is. Kind of. See, the face unlock on the phone is really fast so most of the times I am unaware of what actually unlocked my phone. Rear fingerprint scanners actually let me unlock the phone before I bring it to my face which means that I wouldn’t have to see the lock screen when I didn’t want to. That doesn’t happen here, but it’s quite good for what it is. 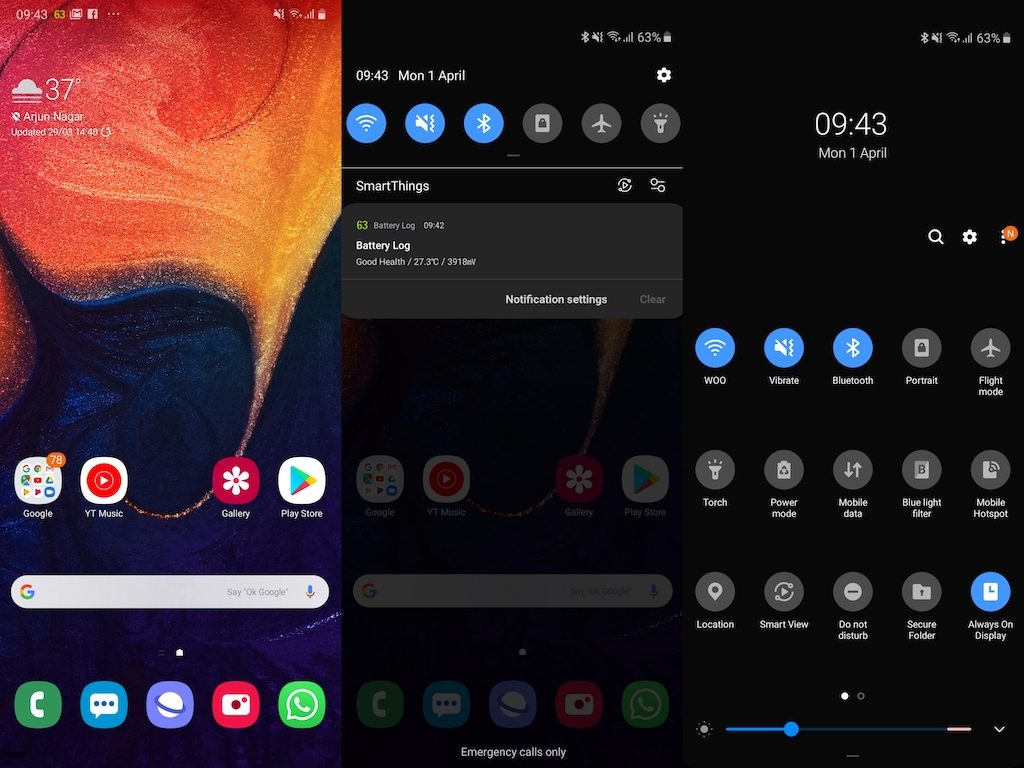 While unboxing the Samsung A50, the thing I was most excited about was One UI. Samsung’s latest software overhaul is one of the most significant ones in recent times and a lot of us were probably done waiting. The S10+ already had it, but I wanted to know how a budget/mid-range phone would run it. Now I have used the phone for the review period and here are my thoughts. To begin with, the home screen and the app drawer look more or less the same of course with different navigation buttons and app icons. For the people who don’t know, I just finished my review of the Samsung Galaxy M30 and coming to this it feels like coming to this suave gentleman who was just yesterday this confused boy who didn’t know what to do in life. OneUI looks like a very polished skin and looks specially optimised for taller phones. Almost all elements and pages of the UI slide slight lydownwards for better reachability and I love that. It converts every phone into a one-handed phone, mostly. 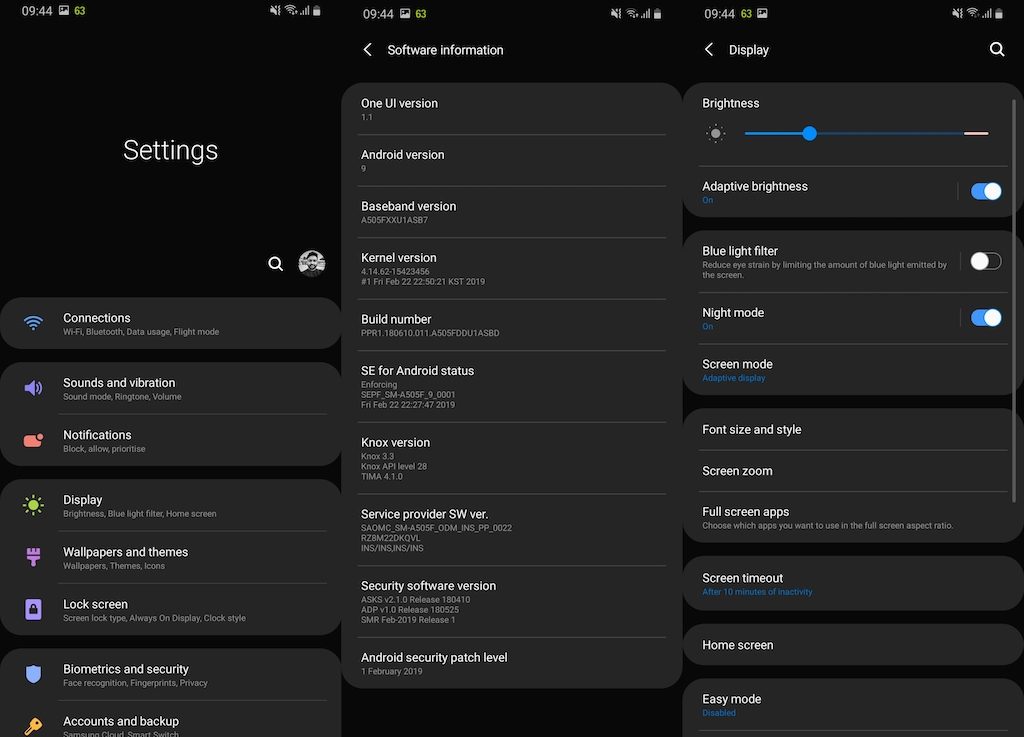 The dark mode is even more amazing because it’s an AMOLED display. The OneUI experience for me starts from the lock screen where I have a fairly customizable AOD/Always on Display. The dark mode then extends to the entire system and apart from looking savage it also is really easy on the eyes. OneUI is easily the most premium software experience under Rs. 20,000. 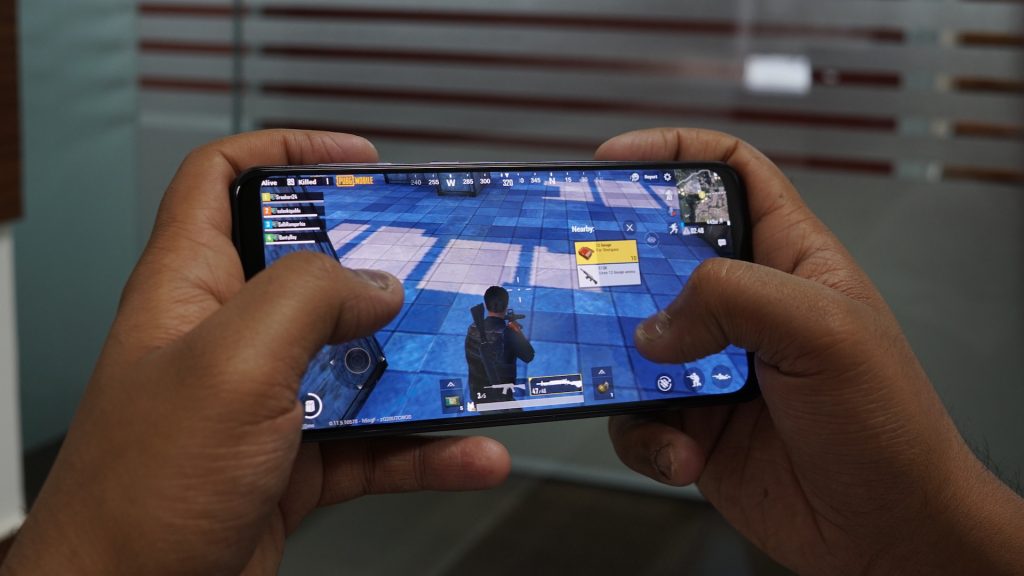 Talking about the performance, the Samsung Galaxy A50 is running an Exynos 9610 processor, which is a member of their 7 series processors. I’ll first talk about day-to-day usage because clearly, it doesn’t have the looks of a gaming phone whatsoever.  Day-to-day usage on this is just sweet. OneUI lets me glide through everyday chores so easily, be it checking emails, being on WhatsApp all day, consuming video on amazon prime or youtube.

My unit has 4GB of RAM and it has been absolutely smooth. The RAM performance is fairly good as well considering OneUI is still a heavier skin than stock android. It means that it will tax the processor more. Coming to benchmark scores, the Antutu score is 146,868 which is definitely higher than the Snapdragon 660’s but not as good as the Snapdragon 675. The Geekbench scores are also lower than what the Redmi Note 7 Pro’s SD 675 produced but what surprised me was the GPU. The 3D mark slingshot extreme for Open GL and Vulkan is both more than that of the Redmi Note 7 Pro’s 675 which is rare to see. Now in theory that should mean really good gaming performance on the phone and, yes sir, that is true. Playing PUBG on this is a very pleasurable experience and is among the best I’ve experienced under 20,000. 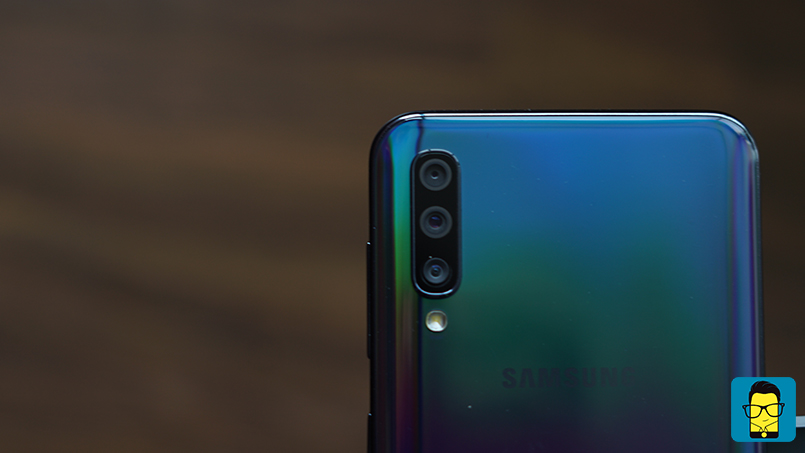 It’s not going to beat the Redmi Note 7 Pro, and when you compare you’ll see that. That said, stand-alone the camera is really good. The colours are quite well produced and Samsung’s post-processing seems to have become a lot better. Also, I really love the opportunities that a wide-angle camera provides. Here are a few shots we took with the A50’a wide-angle lens. Awesome right! A50 does come with video stabilization which is limited to EIS but the fact that it is present is relieving. 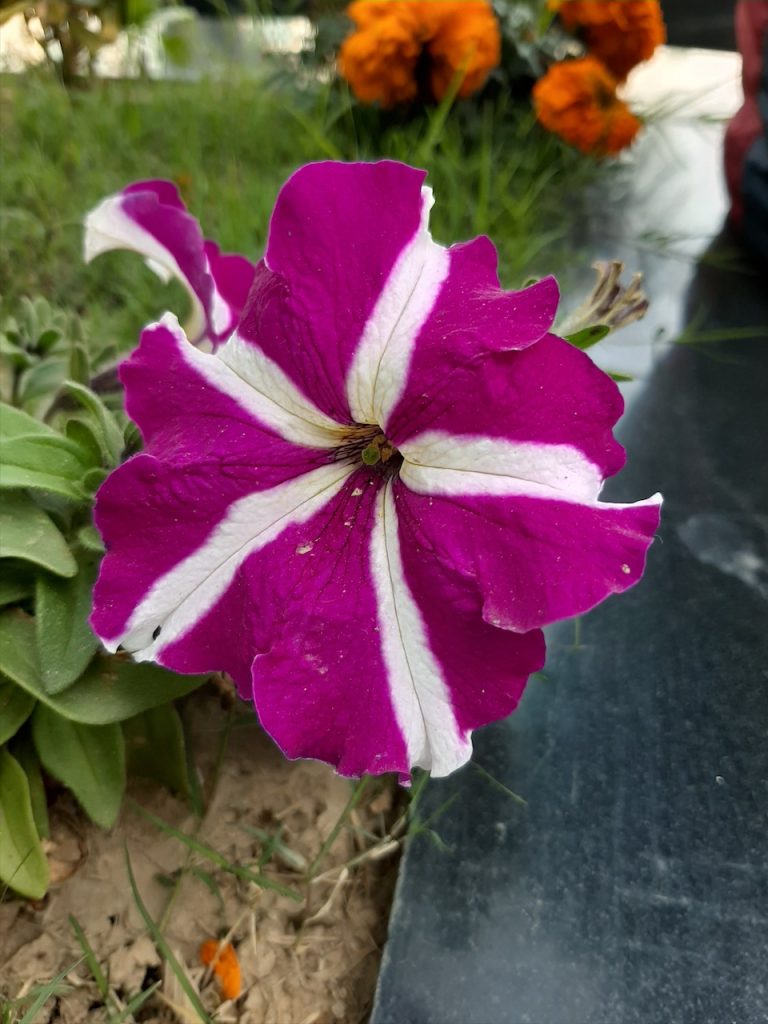 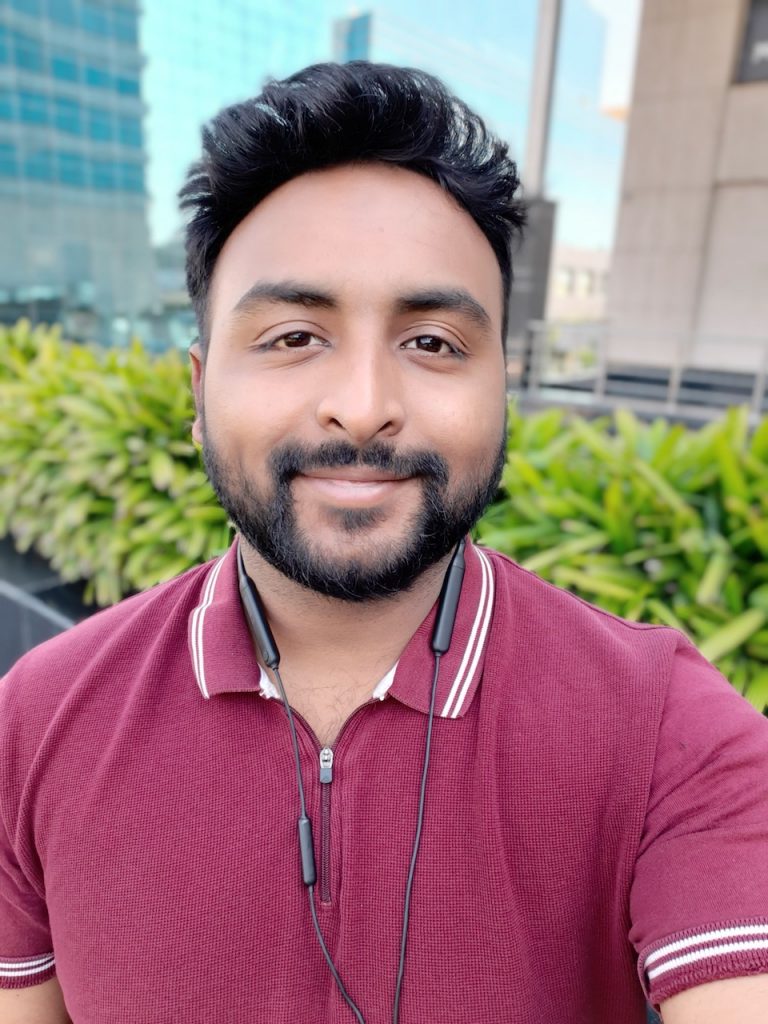 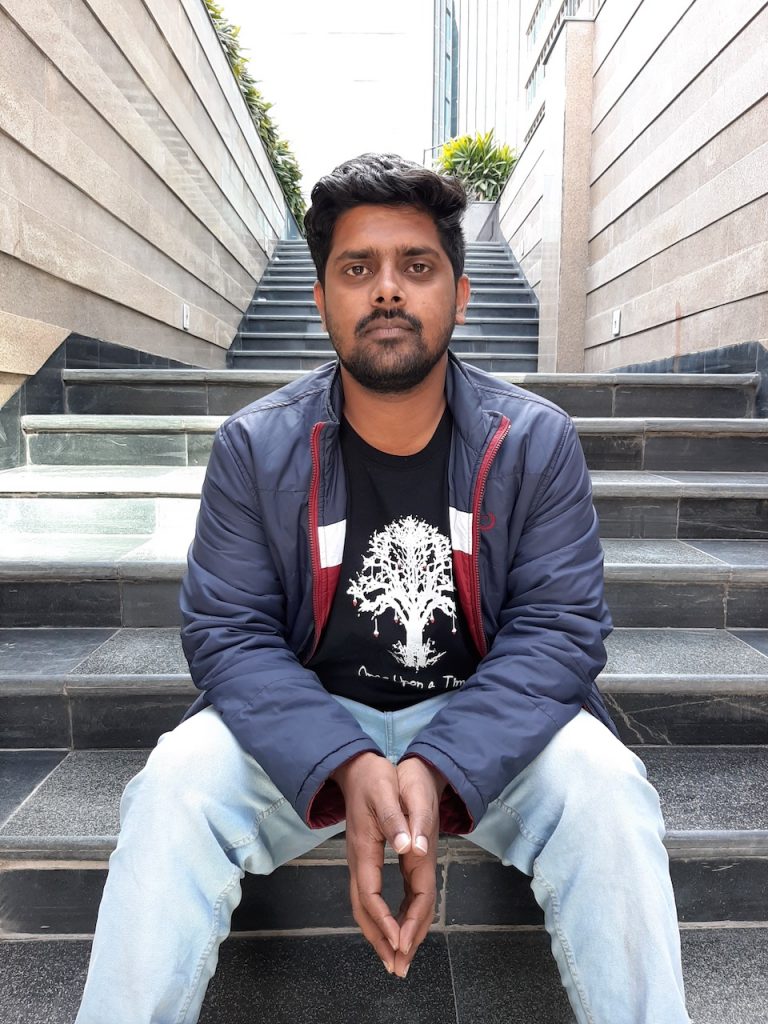 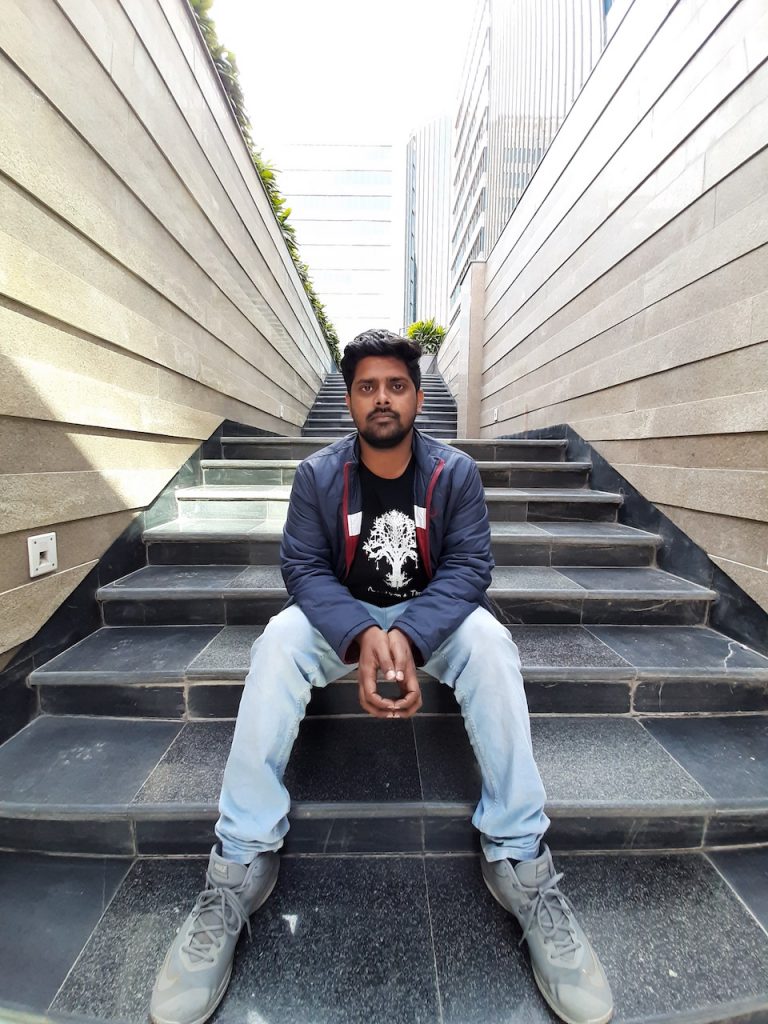 Fortunately, Ershad has already done a detailed camera comparison between the Redmi Note 7 Pro and the A50 which makes my job easier. For the people who want a better selfie performance and don’t care about having the best camera under 20,000, you will be satisfied with the A50. That said if you want the absolute best overall camera then get the Redmi Note 7 Pro.

Inside the A50 you get a 4000mAh battery and comes with a 15W charger. The A50 does stand out here simply because of how thin it is. Successfully hiding the fact that there’ such a big battery inside. I got a screen on time of close to six hours with this which was reflected in the comfortable battery life of a casual full day that I got. 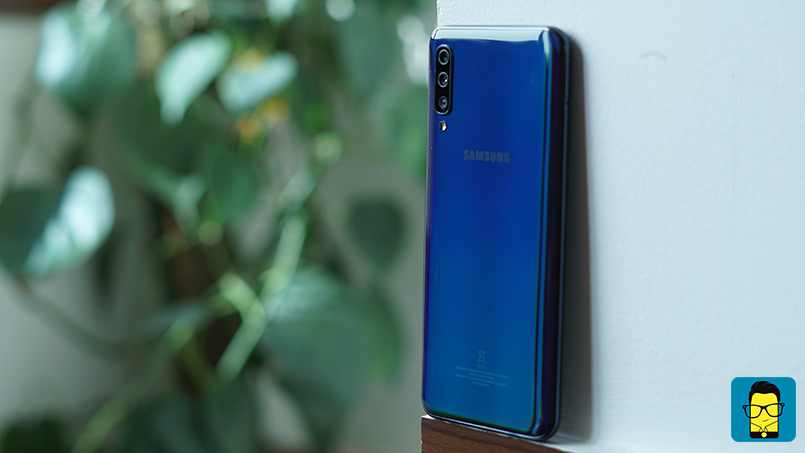 This 4000 mAh capacity battery also took just 2 hours to go from 0 to 100% which is quite fast. The other major factor in the longer battery life is the AMOLED display and the dark mode. It surely doesn’t provide the longest battery life among its competitors and I wouldn’t recommend it to people who are going to be on 4G network gaming for long hours. That said, it’s not gonna feel like an incompetent battery by any means.

The Samsung Galaxy A50 is easily the most favourite Samsung phone that I reviewed and for good reason. Three of my most favourite parts are the gorgeous sleek design, unbeatable Super AMOLED display, and the premium software experience that I was longing for. The Galaxy A50 also sports a very capable processor with impressive GPU performance and cameras that only a few in the price range can beat. Now, if you want the best camera under Rs 20,000, then the Redmi Note 7 Pro makes more sense. Barring that I don’t think there is any other area where the Redmi Note 7 pro beats the Samsung A50 but the price. The Redmi Note 7 pro starts at a whopping Rs. 6000 less than the A50, so if you strapped for cash then go ahead with the Redmi Note 7 Pro sure. But if you want a premium smartphone experience for under 20,000 then the Samsung Galaxy A50 is my definitive choice for that.