Home | Phone Leaks  | Samsung Galaxy A6 and A6 + in the works, spotted on Geekbench

Samsung Galaxy A6 and A6 + in the works, spotted on Geekbench

Samsung’s A series smartphones recently got an overhaul in terms of its naming and number of products on offer. Last year, Samsung offered three sizes under the Galaxy A3, Galaxy A5, and Galaxy A7 moniker. There has also been a Galaxy A8 and A9 that has not been upgraded since two years. However, this year all that has been thrown out of the window. In early 2018, Samsung introduced Galaxy A8 and Galaxy A8 Plus with different screen sizes. However, Samsung is not done with the A series yet. 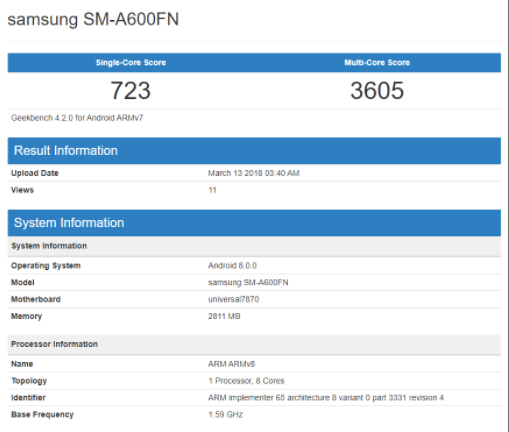 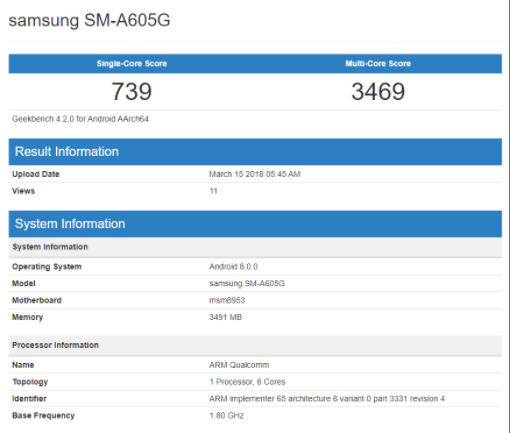 According to a Geekbench sighting, Samsung has two Galaxy A6 models in the pipeline. As you’re aware, Geekbench listing comes with limited info, so we’re short of supply here. Two model number, SM-A600FN and an SM-A605G were found that clearly hint at A series devices. The Galaxy A8 (2018) had model number A530.

Coming to the Geekbench tidbits, the Galaxy A6 features an Exynos 7870 chipset that is a year old SoC found in many current J series devices. While the Galaxy A6+ features a Snapdragon 625 CPU that has been sold in truckloads by Qualcomm. RAM for the two handsets is 3GB and 4GB respectively while both have the same Android 8.0 Oreo software.

If these models eventually make it to market, we’re expecting Infinity displays and probably smaller screen sizes in the A series. Since this is a very first sighting, there isn’t much else known regarding the handsets. But we’ll keep you posted on other developments.

As per Samsung’s model naming schemes, SM-A600FN (A6) is a global version while the SM-A605G (A6+) is expected to be for some Asian regions and South America. There will probably be other Plus variants as well that we have not yet seen on benchmarks.