Samsung Galaxy A6 and A6+ launched with Super AMOLED 18.5:9 aspect ratio display 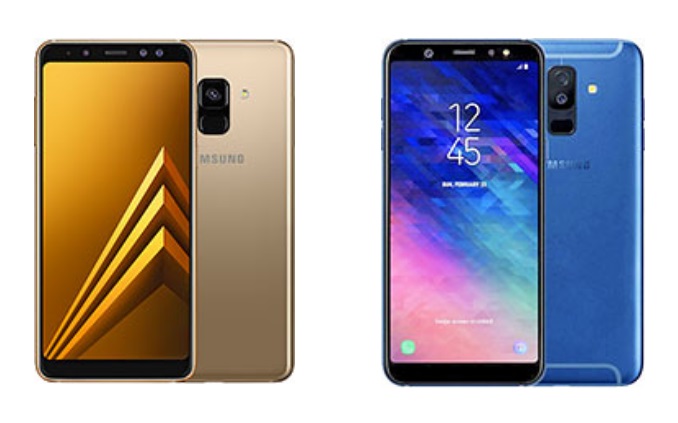 Samsung has launched the mid-range Galaxy A6 and A6+ today. The phones will arrive soon in the selected parts of Europe, Asia and Latin America. This is the first time that the company is including its signature Super AMOLED display on any mid-range phone. They are also bezel-less (theoretically) and carry an 18.5:9 aspect ratio display.

Samsung Galaxy A6: specs and features

The Samsung Galaxy A6 comes with a 5.8-inch Super AMOLED display with a resolution of 720 x 1480p. The phone runs on an octa-core 1.6GHz processor with 3GB/4GB of RAM and 32GB/64GB of internal storage. The native storage of the phone is expandable via a microSD card.

The Galaxy A6 comes with a 16MP main camera with a f/1.7 aperture. The selfie camera on the phone has an identical 16MP sensor with a slightly bigger f/1.9 aperture. The phone has a decent 3000mAh battery, as revealed by the leaks and runs Android 8.0 Oreo. The device carries a support for Dolby Atmos optimized sound on headphones, Bixby Assistant, Bixby Vision, Bixby Home, Bixby Reminder and Samsung Pay. It comes in four colours – Black, Blue, Gold and Lavender. 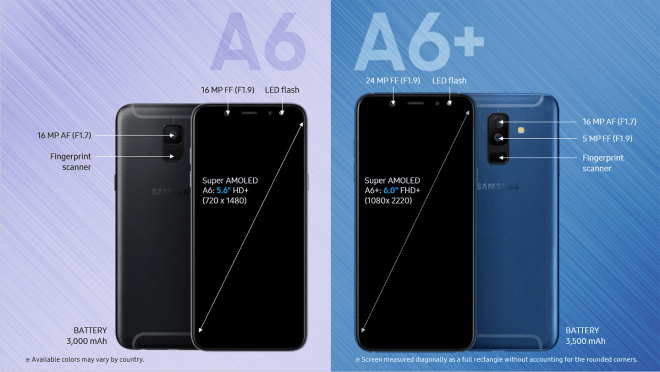 Samsung Galaxy A6+: specs and features

The Galaxy A6+ is a bit taller than the Galaxy A6. It has a 6-inch Super AMOLED display with a resolution of 1080 x 2280p. The phone is powered by a 1.8GHz octa-core processor with 3GB/4GB of RAM and 32GB/64GB of ROM. The internal storage is expandable as well.

The camera specs of this phone is a little better than the smaller model. It has a 16MP + 5MP rear camera setup with an aperture of f/17 and f/1.9, respectively. The selfie snapper of the phone is a little beefy with a 24MP sensor and aperture of f/1.9. It also has an LED flash at its disposal. You can add different backgrounds with stars, hearts and other blurred patterns to your bokeh shots.

The battery capacity of the Galaxy A6+ is 3500mAh and it runs Android 8.0 Oreo as well. The colour options remain the same with Black, Blue, Gold and Lavender. Both these phones have a support for  LTE Cat.6 with 2CA, Wi-Fi 802.11 a/b/g/n, Bluetooth 4.2, NFC (in selected markets), GPS, Glonass, and BeiDou.

Are you excited for their arrival to India? Let us know in the comments section below.  Stay tuned to  Mr. Phone and download our app to get the latest updates from the world of smartphone technology.