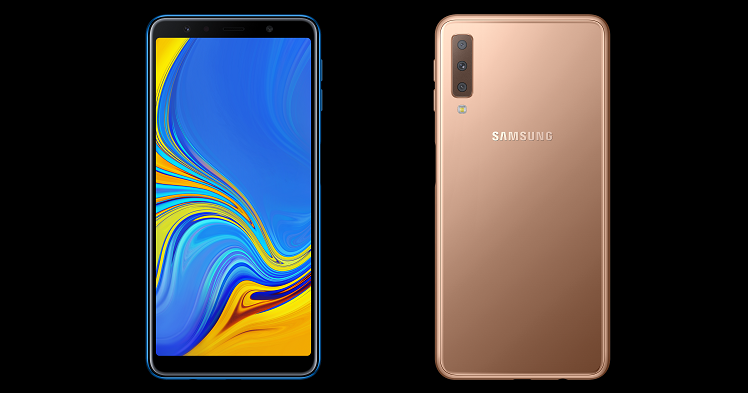 Samsung has launched its new smartphone in India, it is called Samsung Galaxy A7 (2018). The new handset from the brand is priced at Rs 23,990 for the 4GB model and Rs 28,990 for the 6GB model. It will retail in the country in 4 colors variants including Black, Blue, Gold, and Pink. The handset will be made out of Aluminium alloy and Glass. It is said to sport a 7.5mm thickness and Weight at 168 grams.

As far as the camera department is concerned, it packs a triple rear camera setup. Where the main camera is of 24.0MP f/1.7 aperture and other two rear cameras include a 5MP f/2.2 aperture Live-focus and an 8.0MP f/2.4 Ultra-wide lens. It comes with a Touch-to-focus, Phase Detection AF Autofocus technology. The rear camera is supported by a LED flash. For selfies, you can make a use of the 24.0MP front camera with portrait lighting effect.

The Samsung Galaxy A7 (2018) is powered by a Samsung Exynos 7 Octa 7885 chipset, which comes with 8 Cores and clocks at 2.2 GHz. It is accompanied by up to 6GB of RAM and up to 128GB of internal storage capacity. It will be running on the Android 8.0 Oreo. Note that the external storage is expandable. It comes with a fingerprint sensor. As far as the battery life is concerned, its 3300mAh battery juice claims a day’s life. It comes with a side-mounted fingerprint sensor, unlike most of the handsets these days.

Take a look at the detail specifications of the new Samsung Galaxy A7 (2018) smartphone in the table below.