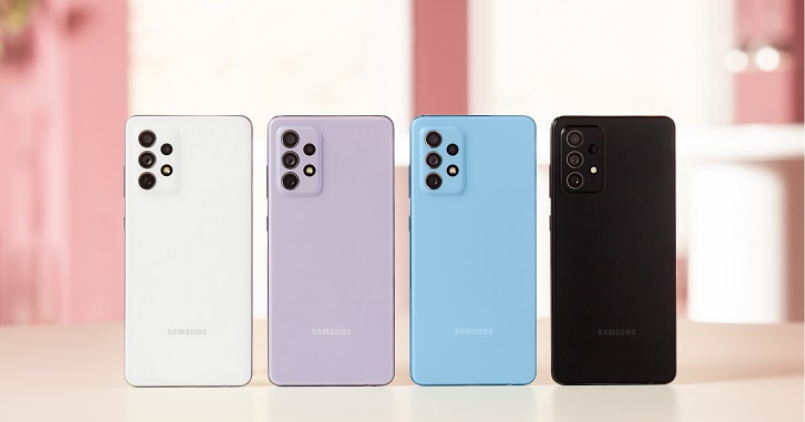 UPDATE: Samsung brings new Galaxy A series devices in India the Galaxy A52 and the Galaxy A72. These devices have seen their global launch recently and now they are available for sale in the country. The Galaxy A72 packs in better battery and bigger screens than the Galaxy A52 while using the same Snapdragon 720G SoC. It has a brighter screen with 90Hz refresh rates and a larger 5000mAh battery. The Galaxy A72 is priced at Rs 34, 999 for 8GB+128GB variant, and Rs 37,999 for 8GB+256GB variant.

Samsung Galaxy A72 has been launched globally with yet another Galaxy Unpacked event. The company has come with a trio of Galaxy A series devices comprising — Galaxy A52, Galaxy A52 5G, and the Galaxy A72. These devices are significant upgrades from their predecessors with brighter screens, higher refresh rate screens, bigger batteries and better cameras too, which is a lot coming from a single event. Samsung has decided to bring some advancements to its low tier devices and not just the flagships: the aforementioned features implies so. While the A52, and A52 5G shares identical specifications; the Galaxy A72 comes with better screens and battery than the former two. Let’s delve right in.

Samsung Galaxy A72 — Display and Design

The Galaxy A72 features a prominent 6.7-inches Full HD+ display, which is an inhouse developed Infinity-O display from Samsung. It further has 90Hz refresh rates too, again, first in the Galaxy A series along with A52 and A52 5G (comes with 120Hz). The pixel density of the display measures 394ppi and peak brightness includes 800 nits. This near bezel-less screen encloses in a soft-edge design and newer camera modules mimicking Galaxy S21 series. The colour options of the device include Awesome Blue, Black, White, Violet colours. Moreover, the Galaxy A72 further comes with an IP67 rating, which should take care of the drive from water spills and dust. 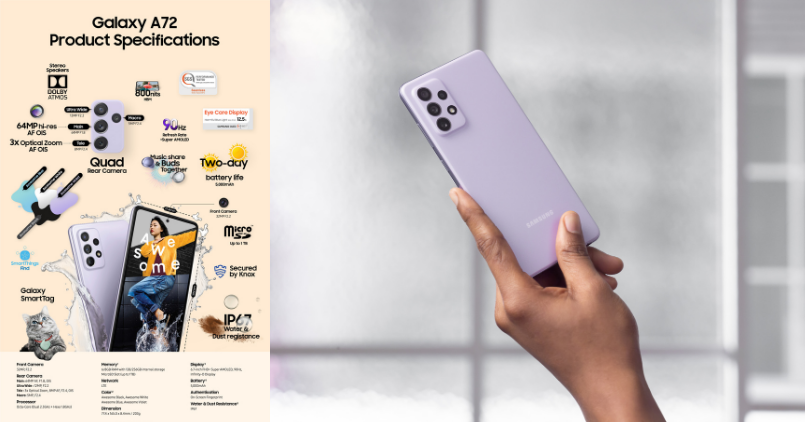 An unspecified octa-core processor is powering the Galaxy A72 that promises clock speeds of up to 2.3GHz. The storage options include either 6GB or 8GB of RAM; accompanied by 128GB or 256GB of onboard storage. The device also has up to 1TB expandable storage option via microSD card. The Galaxy A72 ships with Android 11-based OneUI 3.0 out of the box with up to four years of promised upgrades.

The Galaxy A72 attains a quad rear camera setup with a 64MP f/1.8 sensor acting as the primary camera. It also supports OIS and is coupled with a 12MP f/2.2 ultra wide-angle camera. The device further has an 8MP OIS f/2.4 telephoto lens paired with a 5MP macro sensor as well. These rear cameras further support up to 30x of digital zoom, and 3x optical zoom. The front camera on the front is a 32MP f/2.2 selfie shooter.

The other highlights of the device include NFC support, AKG powered stereo speakers, LTE, dual-band Wi-Fi, Bluetooth 5.0, GPS, and an on-screen fingerprint sensor, for authentication. 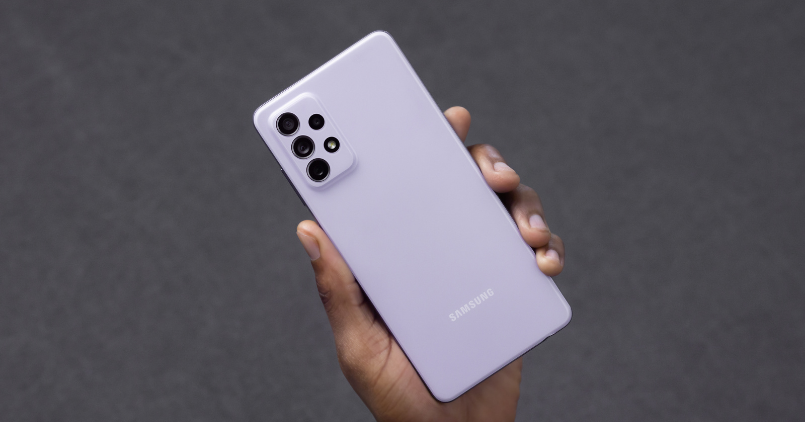