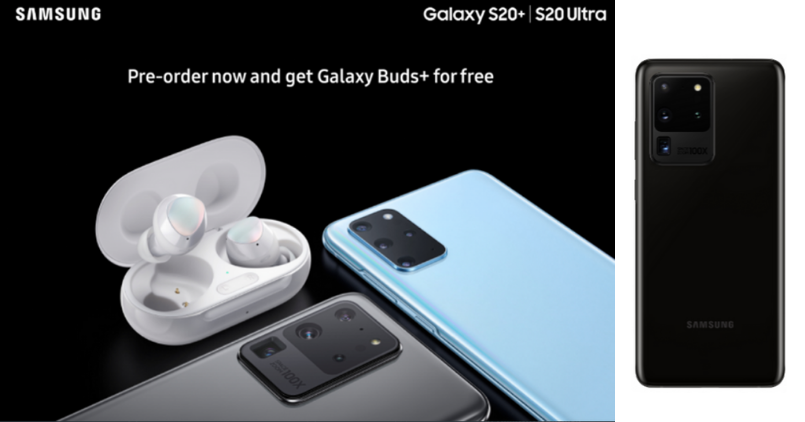 Samsung is all set to unveil its all-new Galaxy S20 series soon next month in San Francisco. Yesterday we learn about the leaked official renders and the euro pricing of the new phones. Today, Evan Blass has given us a new leak, which suggests the Galaxy Buds+ will be available for free on pre-orders of the Galaxy S20 series smartphone.

Samsung Galaxy S20 Series and Galaxy Buds+ – What to expect?

We have got the first official leaked poster of the upcoming Truly Wireless earphones from the house of Samsung. The all-new Galaxy Buds+ weren’t really a mystery, but we now know it concretely how they will look. Especially, that they will be offered for free with a pre-order of the Galaxy S20+ and S20 Ultra models.

This leaked image showcases the Galaxy Buds+ and rear camera part of the S20+ and S20 Ultra. In this image, you can clearly see the massive camera bumps, especially on the Ultra variant. With a marking of 100X zooming capability of the phone. The leakster further shared high resolution renders of both the phones as well without any watermarks.

Unfortunately for people looking to learn about the new Galaxy Watch upgrades, there is supposedly no leak regarding that. At this point, it is clear now how the upcoming Samsung Galaxy devices will look. What do you guys think of them? Let us know in the comment section below.