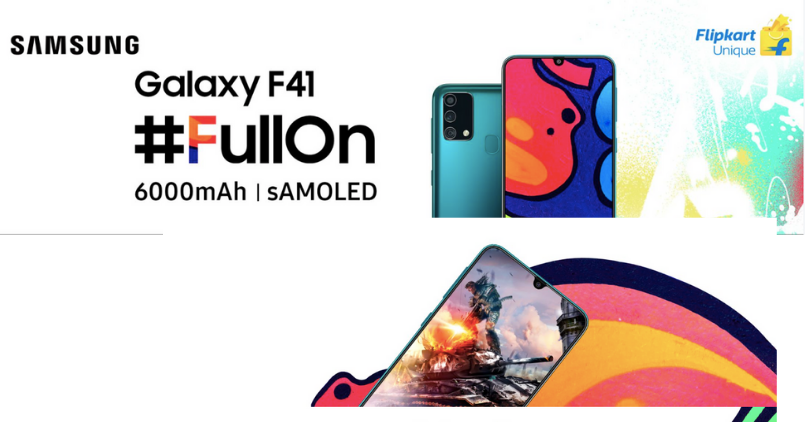 Samsung took the budget segment by storm post the launch and success of it’s M-series of devices, which, took into account the wrongs of the J-series and pledged to fix it. Add to that, the success of the new A-series of devices. Now, Samsung fresh on the wave of multiple successes seems to be feeling the need for a new series, in the form of the F-series, with the first device, Galaxy F41 launching on October 8th. Some specifications of the same have been revealed, which we will be discussing in the article.

First of all, let us discuss the features and specifications revealed by the Flipkart teaser of the device. The device will feature a massive 6000 mAh battery coupled with a Super AMOLED display, something that is a hallmark of Samsung, which, in the segment of its devices is amongst the best. It will be an Infinity-U display, and, the device will feature a triple camera setup and a fingerprint sensor to the back.

The bezels of the device, according to some listings seem to be quite thin, which is a welcome addition to Samsung devices. On Geekbench, the device was spotted with the Exynos 9611 SoC, with 6GB of RAM. Additionally, according to a known leakster, the device will feature a USB Type-C port, a 3.5-mm headphone jack with support for fast charging. The device will also come in two storage variants and could be launched in three colours, Black, Blue, and Green.

Do note, the device will be launching on the 8th of October, with the device stated to be sold via Flipkart. The launch time for the same is 5:30 PM IST. What are your thoughts on the new Samsung Galaxy F41? Are you excited about its launch? Let us know in the comments below.