Home | Featured Stories  | The Samsung Galaxy Fold is official, and comes at a price of 1.4 lakhs

The Samsung Galaxy Fold is official, and comes at a price of 1.4 lakhs 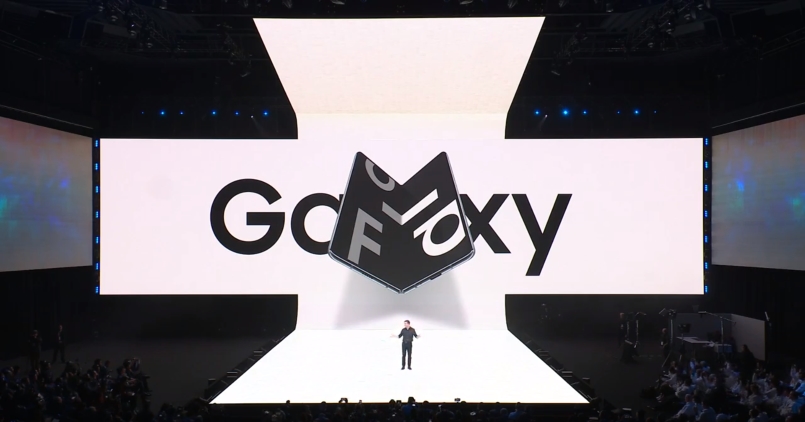 After a lot of teasing, Samsung has finally made its foldable smartphone official. Called the Samsung Galaxy Fold, the company showcased the futuristic smartphone at its Galaxy Unpacked event. So let’s take a look at what the device offers.

The Galaxy Fold comes with a new 7.3-inch Infinity Flex Display. It allows the phone itself to have a tablet-sized screen that can be folded to fit into a pocket. As for the resolution, it comes with a 1536 x 2152 resolution for the expanded mode. However, folded, there is a 4.6-inch with a resolution of 840 x 1960. The device comes with the Exynos 9820 SoC coupled with 12GB of RAM and 512GB of Universal Flash Storage 3.0 (eUFS) for fast speeds. The company has also built two separate batteries for the device.

The Galaxy Fold comes with a hinge system that has multiple interlocking gears. Hidden behind the chassis, they are invisible to the user. At the rear of the device, there’s also a triple-camera system that will be used for both tablet and phone modes. Talking about the tablet mode, Samsung has added the ability to multitask using three apps at once. Called app continuity, you can use a single app on the smaller screen and have it automatically appear on the larger screen when you switch. As for the multitasking, you can drag and interact with all three apps simultaneously.

The Samsung Galaxy Fold certainly sounds amazing, but it doesn’t come cheap at all. The Galaxy Fold is priced at $1,980 (~Rs. 1,40,600). The company states that the device will be launched on April 26th. What’s more, is that customers buying the device will also get free units of the Samsung Galaxy Buds. Samsung is creating four different colors for the Galaxy Fold, and there will be both an LTE and 5G version of the device. As of now, there is no word on the Indian launch or pricing of the device. But what do you think? At over 1.4 lakhs, is the Galaxy Fold a lucrative option? Will you be willing to be an early adopter? Let us know in the comments below.