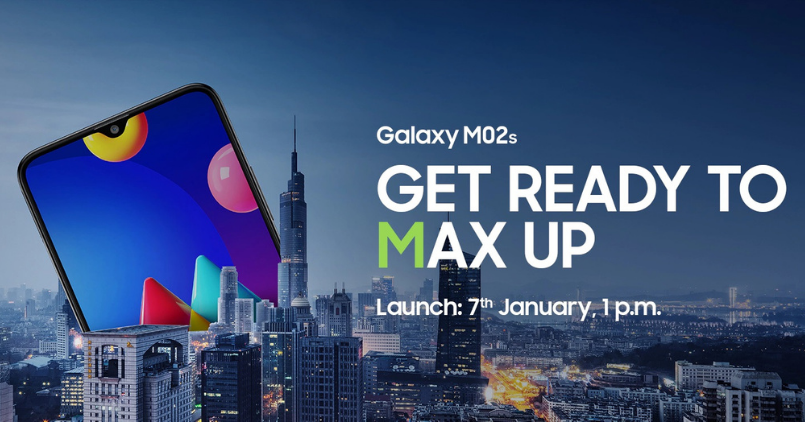 Samsung is introducing a new budget smartphone — the Galaxy M02s in India. The launch will take place on January 7th at 1 PM. This comes as the successor to the Galaxy M01s, which launched early, last year. This phone also joins as a new entrant, this year in Samsung’s popular M series portfolio. Along with the launch date, Samsung also confirms a few of its specs and what to expect from the new M series budget smartphone — that is said to arrive in the sub-10K price segment.

The Galaxy M02s sports a 6.5-inches HD+ display, which is Samsung’s popular Infinity-V display. Under the hood, the latest Galaxy M series handset will be featuring an unspecified Snapdragon chipset — likely a SD400 series one. The device further equips a 4GB of RAM storage variant, which claims to be the first phone in doing so under the sub-10K category. The other confirmed specifications include a massive 5000mAh battery capacity.

The other highlights, going by the teaser on the Samsung’s Galaxy M02s listing, suggest that the phone will likely feature a triple rear camera setup. The rear of the device also seems to have a textured finish. Further, the device could come with a USB Type-C charging port and speaker grille right adjacent to it.

Unfortunately, Samsung doesn’t specify precise details of the upcoming Galaxy M02s smartphone yet. We can expect more of the device soon. As the launch is taking place in a couple of days from now. Until then, stay tuned, and come back here for more coverage on the Galaxy M02s launch event on January 7th, 2021.