One of the most anticipated devices from Samsung this year is the Samsung Galaxy S10. However, that isn’t the only device that the company is said to be working on. The company is also working its gears on the Galaxy M10. We’ve already covered the fact that both the Galaxy M10 and the Galaxy M20 will be embracing the Make in India initiative. And now, the support page for the device has gone live on Samsung India’s website. 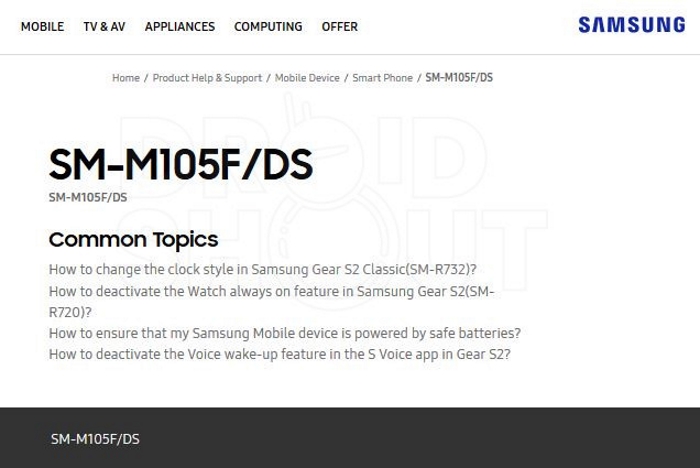 Ahead of its official debut, the Galaxy M10 has now been spotted on the Samsung India support website. Obviously, the page is not live anymore, with Samsung having removed the link once users spotted it. The page did not reveal any information about the device as such. However, it does confirm that the Galaxy M10 could arrive sooner than one might have expected.

Samsung Galaxy M10 specs were recently leaked thanks to its FCC Certification. As per the leaks, the Galaxy M10 will sport a 6.02-inch display with an Infinity-V cutout. Under the hood, you’ll get an Exynos 7870 SoC alongside 3GB of RAM. As for storage, there are expected to be two variants, 16GB and 32GB. There will also be a microSD card slot for expansion. The device is said to come with a 3,400mAh battery. It will be shipped with Android 8.1 Oreo with Samsung Experience on top of it.

While the above are the confirmed specifications, the rumor mill also sheds some light on the camera department. The Samsung Galaxy M10 could come with a 13MP sensor at the back, with a 5MP shooter up front. Additionally, there is expected to be a physical fingerprint sensor at the back. The Galaxy M10 will be released in Blue and Dark Grey variants.

The Samsung Galaxy M10 is rumored to priced under Rs. 10,000. This is widely due to the Make in India programme which will help them cut down on the costs. As for the launch, while there is no word on the exact date as of yet, the support page going live does suggest the launch to take place soon. Stay tuned to the Mr. Phone for all the buzz on the Galaxy M10 as well as all the latest smartphone news.