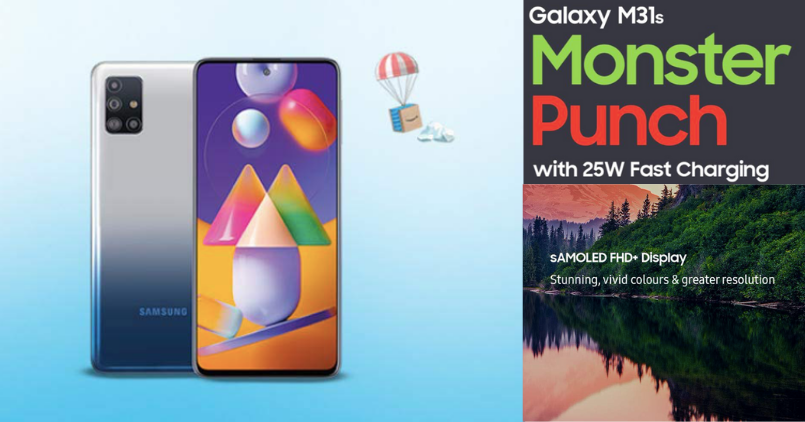 Samsung has launched its new smartphone in India, it is called Samsung Galaxy M31s. The new handset from the brand is priced at Rs 19,499. It will retail in the country in 2 colours variants including Mirage Black and Mirage Blue. The handset will be made out of Plastic. It is said to sport a 9.3mm thickness.

Talking about the display of the Samsung Galaxy M31s, it is a 6.5-inches display with a resolution of 1080 x 2340 pixels. This means the pixel density of the screen is at 403 ppi. It is a Super AMOLED panel, which comes with a 20:9 aspect ratio.The screen-to-body ratio of the device is at .%. The company teases that its display has a Capacitive, Multi-touch, Corning Gorilla Glass, Infinity-U Display, Widevine L1 certification, Peak brightness – 420 cd/mÂ².

As far as the camera department is concerned, it packs a quadruple rear camera setup. Where the primary rear camera is of 64.0MP (Sony IMX682 ) and the secondary rear camera is of 5.0MP (macro). There is a 12MP ultra-wide lens and a 5MP depth sensor. It comes with a Touch-to-focus, Phase Detection AF Autofocus technology. The rear camera is supported by a LED flash. For selfies, you can make use of the 32.0MP front camera.

The Samsung Galaxy M31s is powered by a Samsung Exynos 7 Octa 9611 chipset, which comes with 8 Cores and clocks at 2.3 GHz. It is accompanied by a 6GB/8GB of RAM and 128GB (UFS 2.1) of internal storage capacity. It will be running on the Android 10. Note that the external storage is expandable. It comes with a fingerprint sensor. As far as the battery life is concerned, its 6000mAh battery juice claims a day’s life. It has a 25W fast charging support as well.

Take a look at the detailed specifications of the new Samsung Galaxy M31 smartphone in the table below.

Here are the launch prices according to the configurations.

The sale of the handset starts from August 6 on Amazon Prime Day.