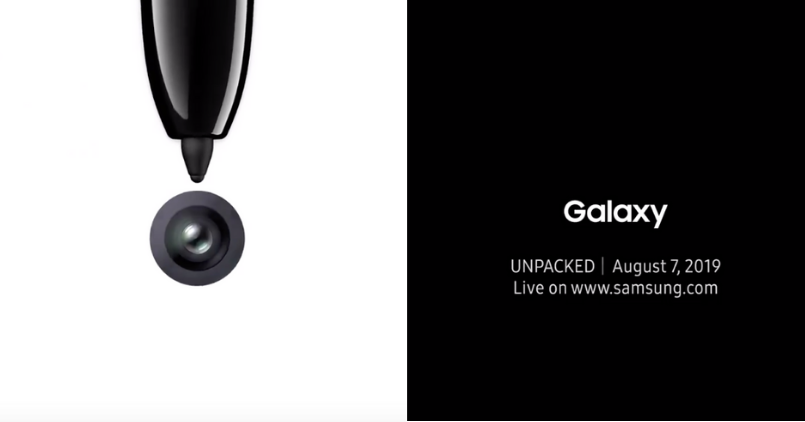 The South Korean smartphone maker is all set to introduce its Galaxy Note 10 on August 7. The brand took this announcement to Twitter. The Barclay’s Center in Brooklyn, New York where Samsung’s super-sized Samsung phone would be showcased. The invite shared by the company doesn’t reveal explosive details, but it subtly hints that a punch-hole design is coming on the Galaxy Note 10.

Allegedly, Samsung is believed to be putting that punch-whole selfie camera in the dead center on the screen. With a rumour of a refreshed design for the Note 10, just like Samsung Galaxy S10 and S10+, we could be seeing a front-facing camera embedded in the display. With of course a differentiation, it will be staring you.

Time to level up. Galaxy Unpacked on August 7, 2019. #SamsungEvent pic.twitter.com/2CtFPjFCAr

Samsung is believed to be introducing dual Note phones with a difference in display sizes, which is something they’d be borrowing it from its S line-up. Plus, the brand is supposed to introduce 5G variants as well. Thus, we may see a total of four Galaxy Note 10 variants. Amen to that!

While everyone in the room would be talking about the Galaxy Note 10 at the launch day, most people would like to talk about the elephant in the room. That elephant is the Galaxy Fold, which is indefinitely delayed, and was pushed to market before it was ready, as quoted by Samsung co-CEO Dj Koh.

What do you guys think of the Galaxy Note 10 launch in India? When should it arrive in the country? Let us know in the comment section below.