Samsung Galaxy S10 launched but you already knew everything about it 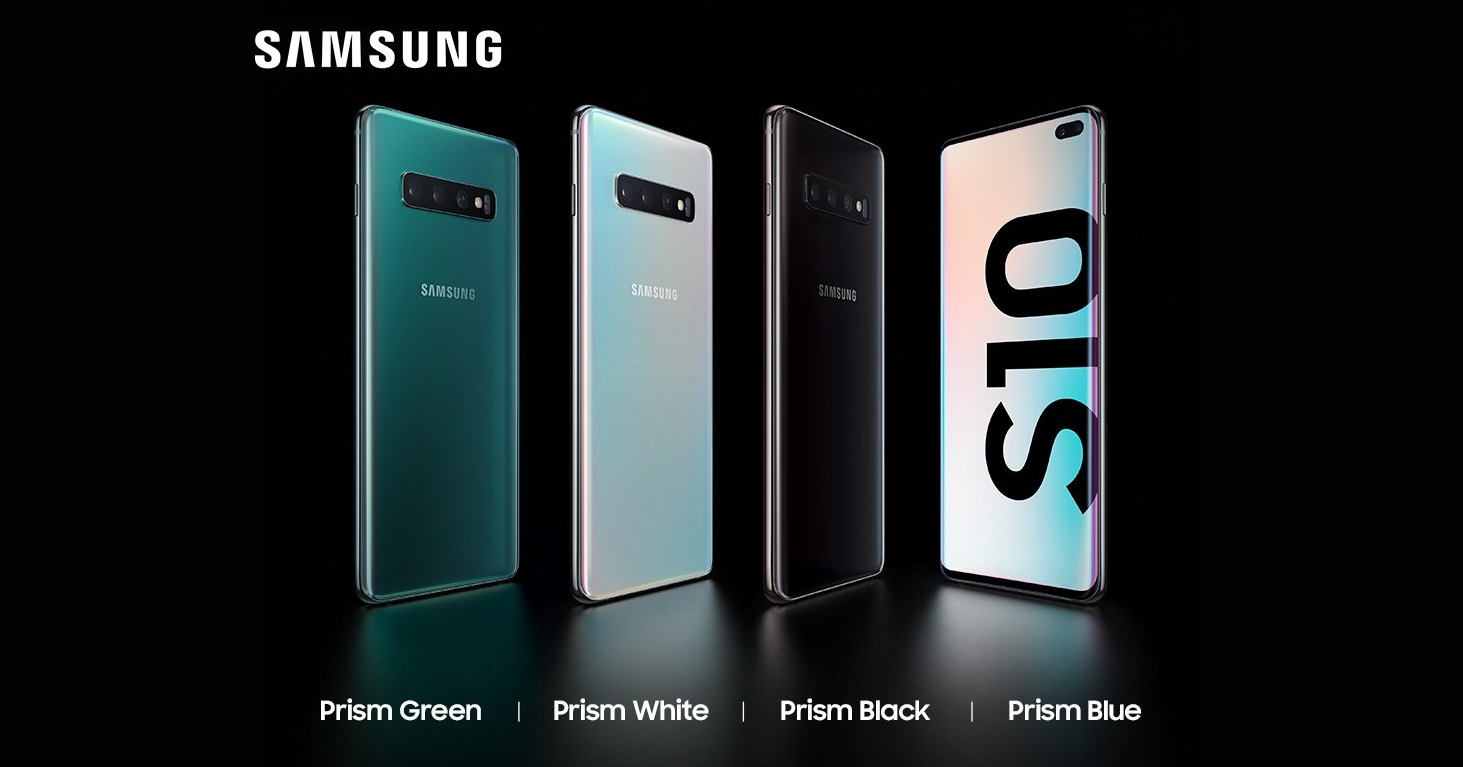 Samsung’s Galaxy S10 lineup was undoubtedly the most awaited thing in the smartphone industry. But also, the most leaked. I mean, we already knew pretty much everything to expect well before the launch. And well, they are finally here, in all their glory. Yes, I’m saying “they”, coz Samsung has launched not one, not two, but three flagship smartphones. The lineup is quite similar to the way Apple launched the iPhone XR, XS, and XS Max. However, the difference between the three smartphones isn’t that much, which makes them quite lucrative. So what are we waiting for, let’s take a quick look:

Right off the bat, the first device in the list is the Samsung Galaxy S10e. Unlike the usual edge shaped displays, the Galaxy S10e comes with a flat display. That said, it still is a 5.8-inch FullHD+ Dynamic AMOLED display with a 19:9 screen resolution. Under the hood, you get the Exynos 9820 SoC paired with either 6GB or 8GB of RAM. As for storage, you can choose between 128GB or 256GB of internal storage. Thankfully, there is also a microSD card slot that supports expandable storage up to 512GB.

As for camera optics, the Galaxy S10e comes with a dual camera setup at the back. You get a primary 16MP ultra-wide f/2.2 sensor coupled with a dual-pixel (f/1.5, f/2.4) 12MP sensor with OIS. Up front, there is a 10MP f/1.9 dual pixel sensor for selfies. The entire device is juiced up by a 3,100mAh battery. Also, the Galaxy S10e comes with a capacitive fingerprint scanner. However, Samsung is also offering super fast and secure face recognition on the device.

The Galaxy S10, which is the middle man in the series, is probably the best value for money in the lot. The device comes with the same flagship Exynos 9820 chipset but comes only in 8GB RAM variants. The display here is a 6.1-inch Wide Quad HD+ Dynamic AMOLED display with a 19:9 aspect ratio. For storage, the Galaxy S10 will be available in two variants of 8+128GB and 8+512GB. Additionally, there is the support for microSD cards up to 512GB.

Last on this list is the Samsung Galaxy S10+, which is basically an enhanced version of the Galaxy S10. It is for those of you who want the utter best of everything. The Galaxy S10+ comes with a 6.4-inch Wide Quad HD+ Dynamic AMOLED display with a 19:9 aspect ratio. But that isn’t the best part about it. It’s the variants that you should be excited about. The base variant of the Galaxy S10+ offers 8GB of RAM and 128GB of storage. However, there are two more special edition variants of the device available only in ceramic builds. There’s an 8GB+512GB up for grabs. However, the highlight of the show is the highest variant which offers a whopping 12GB of RAM alongside 1TB of internal storage. Oh, and there’s the microSD card slot for expandable storage up to another 512GB.

When you look at the camera, it is pretty much the same. The rear cameras are the same as the Samsung Galaxy S10. However, up front is where the story changes. The Samsung Galaxy S10+ does come with the same 10MP f/1.9 dual pixel sensor for selfies. However, there’s an extra 8MP f/2.2 sensor as well for depth effect in selfies. All in all, the Galaxy S10+ comes equipped with a total of 5 cameras. And powering this device is a decently sized 4,100mAh battery. Similar to the Galaxy S10, you get an in-display fingerprint scanner and face unlock here.

Unlike the differences in the storage variants and the cameras, all three S10 models are pretty much the same. They feature the same Exynos 9820 SoC and offer nearly similar performance. However, in certain regions, the S10 lineup will be powered by the Qualcomm Snapdragon 855 processor. 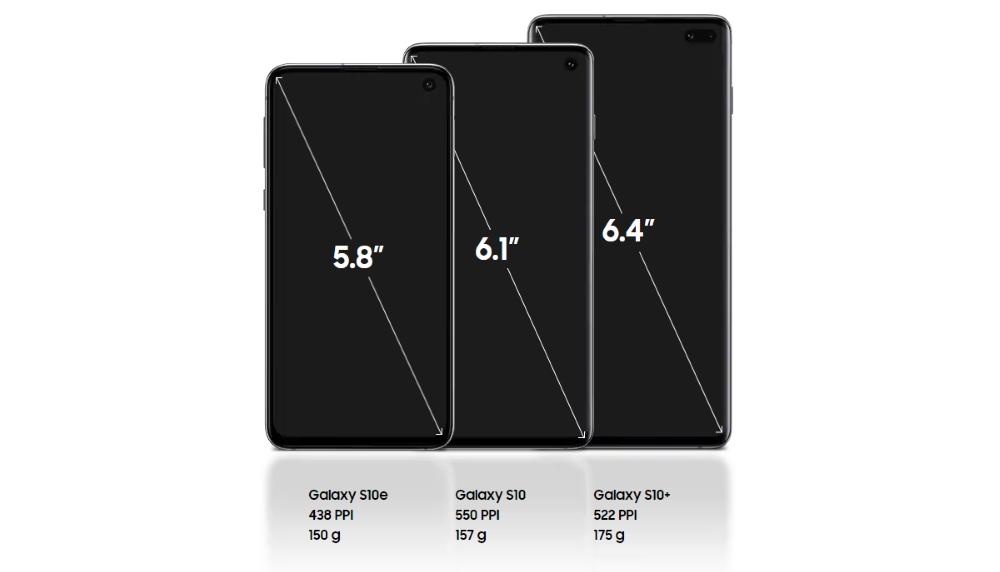 What’s more, is that Samsung has also added more features to this year’s Galaxy Lineup. All three devices come with Fast Wireless Charging 2.0, with support for Wireless PowerCharge. Wireless PowerCharge will allow users to easily charge Qi-certified smartphone devices and even compatible wearable devices. In addition, Galaxy S10 is capable of charging itself and a second device simultaneously via Wireless PowerShare, while connected to a regular charger.

Announced alongside the Samsung Galaxy S10 lineup was another smartphone, which is the Samsung Galaxy S10 5G. As suggested by the name, the device offers 5G connectivity options. Samsung claims with the Galaxy S10 5G, consumers on a 5G network can download a full season of a TV show in minutes, play graphics-rich cloud games with virtually no lag, enjoy enhanced VR and AR experiences and stay in touch with friends and family via real-time 4K video calls. As for the device itself, it comes with a larger-than-life 6.7-inch Infinity-O Display. There’s Samsung’s 3D Depth Camera for 3D-image capturing to power Video Live Focus and Quick Measure. The device is juiced up by a 4,500mAh battery which supports super fast charging at 25W.

That’s not all! Behold the Samsung Galaxy Buds and Wearables

Oh, and Samsung has also launched a new range of wearables. These were all leaked previously via an app update. As expected, there is the Samsung Galaxy Fit and Fit E fitness trackers, and the Galaxy Watch Active. You can check out our coverage of them here as well.