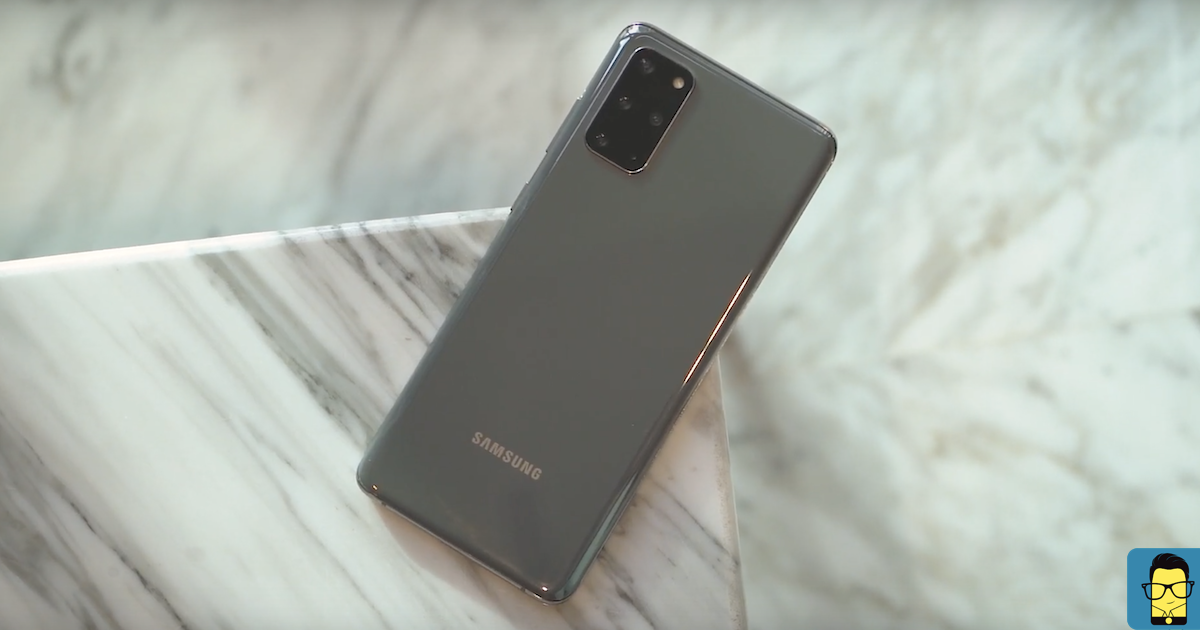 In the Samsung Galaxy S20 series, the S20+ is the middle child that’s craving for some attention along with the S20, the youngest one. But trust me, while the S20 Ultra is the more popular, more desirable phone, it is the S20+ that most folks are going to end up buying. If you ask me, the S20 is the most lovable middle child out there. Let’s get down to my review. 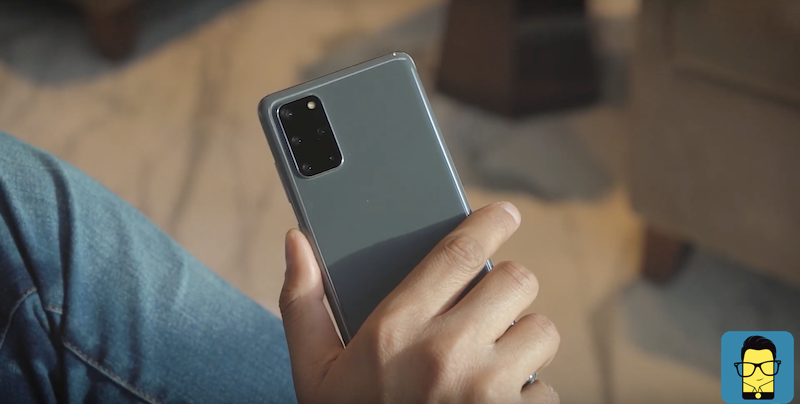 The S20+ biggest advantage is that it is not as big as the S20 Ultra. If you want a big phone in the S20 series, the S20+ is the right size. And, for my massive hands, it is just perfect. Plus, the fact that you have a 20:9 aspect ratio tall display makes the S20+ one of the easiest phones to handle and use. I have the Cosmic Grey variant and trust me, it looks damn classy. Trust me, if you are someone whose job demands you suit up, this is the phone you must buy. This is the Blackberry replacement you were seeking out. Also, the rectangular camera module on the top left corner of the rear has a manageable bump too.

Plus, the phone is damn slim at just 7.8mm thickness despite packing in a fairly large 4500mAh battery. Since it is made entirely of glass, Samsung uses Corning’s Gorilla Glass 6 on the front and the back for added protection. In the duration that I have had the phone, there is not a single scratch on the front or the back. It feels densely packed and sturdy as well. 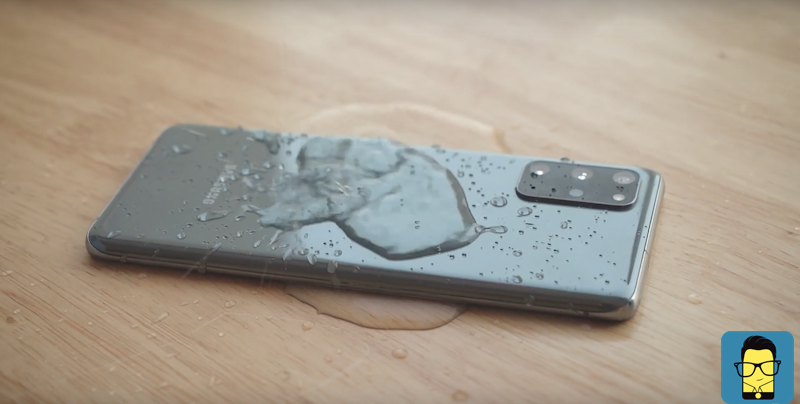 Obviously, since this a Samsung S series phone:

You get it, the works. 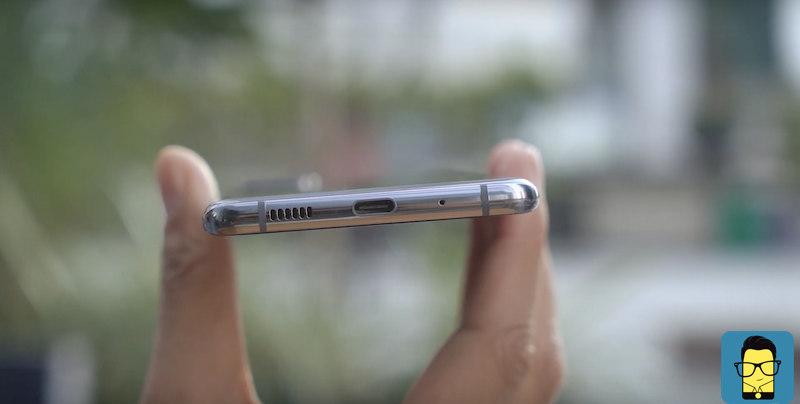 But, what I don’t like about the design is obviously the fact that there is no headphone jack. I know it is stupid for me to even dream about it now but man, I have lost way too many dongles by now. I still love my analogue 3.5mm jack-toting earphones. It is my one true tech love. The other grouse of mine is that the phone is slippery without a case. Of course, I used the bundled case but I am not a fan of it because of the massive lip. It hampers the user experience when you swipe across the screen or swipe from the top or the bottom.

Anyway, these are negligible problems in design really. If you ask me, the Galaxy S20+ might not be flamboyant but with Samsung perfecting years of S-series design has culminated into one of the best looking and feeling phones of all time.

Most of you already know that Samsung makes the best displays. It is the same with the S20+. There’s all the high-end display tech like support for HDR10+, a Dynamic AMOLED 2X panel, and phenomenal peak brightness. However,  the Korean tech behemoth has gone ahead and added a 120Hz high refresh rate setting on the S20 series. This changes things. Drastically! Now, I can easily convince OnePlus-toting fans to take a look at the S20 series for how smooth the whole experience feels now. But yes, it is a pity that the 120Hz setting doesn’t work at the full 2K setting.

Well, Samsung had to keep some room while upgrading the display on the Note 10+ display, right? 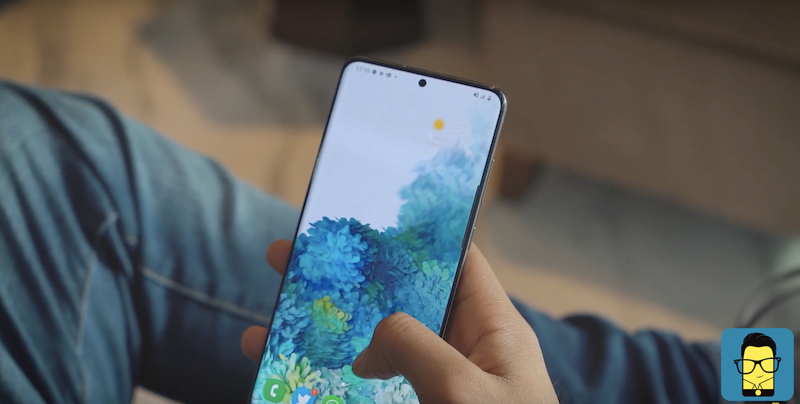 While the S20+ has a phenomenal display with the 120Hz refresh rate panel, I am pretty glad that the curved edges are almost non-existent. At a time when waterfall displays are going to soon become the norm, Samsung has decided to make it closer to a flat panel and I couldn’t be happier. I can show it on camera but just the experience of swiping on this display is a treat!

Moving on, just like the Note 10+, the S20+ has a very tiny punch-hole camera bang in the centre. And, the ultrasonic fingerprint scanner is definitely faster now. In fact, I love how fast it opens from screen off. My only concern with the scanner is the slow animation of Samsung’s UI. Which is why optical fingerprint scanners on phones such as the OnePlus 7T Pro might feel faster but the S20+ is equally fast if you ask me. 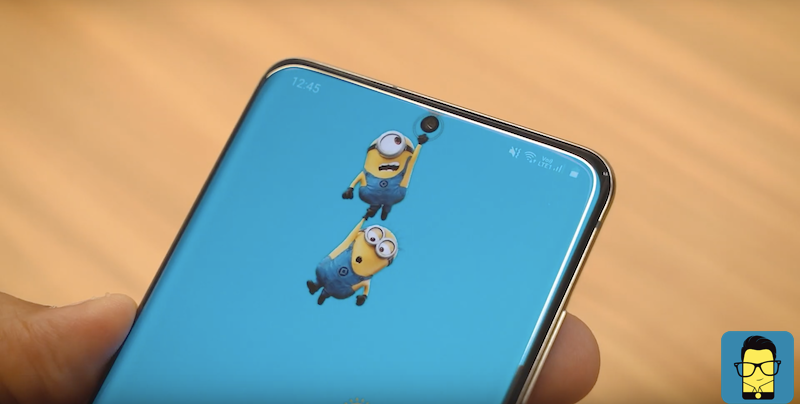 Talking about the S20+ cameras, I have a detailed camera comparison with the iPhone 11 Pro, which you must check out. But, let me highlight a few things from that comparison:

So, all in all, the S20+ cameras are a great upgrade but I still feel that a couple of software upgrades should improve the algorithm and fix the camera app’s wonky nature.

The Samsung Galaxy S20+ in India uses the Exynos 990 SoC. Undoubtedly, the benchmarks are not as impressive as the SD865 but I couldn’t tell any difference in daily usage. No, seriously. The phone feels as fast as any modern flagship phone should. I played a lot of Call of Duty and not once did I face any bottleneck. Also, 120fps games such as Oddmar and Shadowgun Legends just look gorgeous on the phone. But, the phone does get warm after about 40mins of gaming. And, PUBG still doesn’t run at HDR and Extreme. I hope that changes soon.

The RAM performance is great too with most apps staying in memory for a long time. Really no complaints anywhere. I have been using the phone as my primary phone with a truckload of apps and not once did the phone stall.

As for the multimedia experience, the S20+ is A-grade with support for HDR10 video and a 2K panel at 60Hz. Plus, you also get great audio support through the Dolby Atmos setting, especially when you use headphones. But, I still prefer LG’s flagship phones for their audiophile-grade sound. And, if we have to talk about the stereo speaker. It sounds crisp and loud but it doesn’t have a full sound as the iPhone 11 Pro, which offers a little bit more punch in the low end.

Okay, about the Samsung Galaxy S20+, it runs One UI 2.0 based on Android 10. I have already said it, it is my favourite skin second only to Oxygen OS. Only a couple of years ago, the situation was wildly different. Samsung’s skins were not appreciated by enthusiasts but today One UI has completely improved the design and the UI elements to an extent that even staunch haters cannot dislike it. From improved gesture navigation to a UI that enhances one-handed usage experience, One UI 2.0 is truly a massive upgrade to Samsung’s de-facto software experience. Plus, you also get an excellent and precise haptic feedback motor to go along with it. 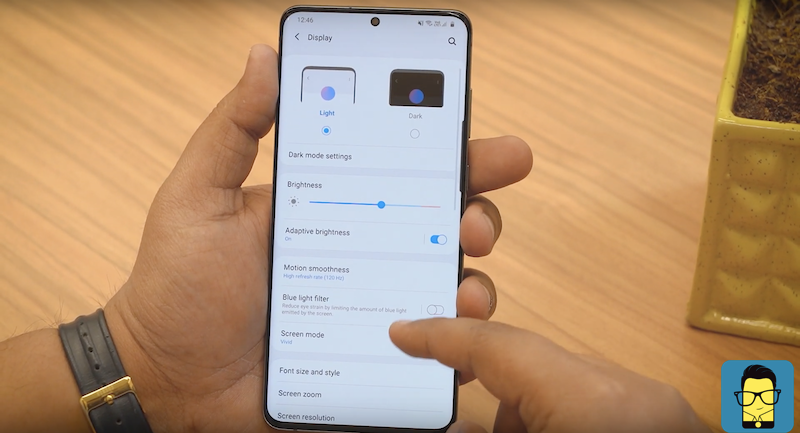 A couple of new additions to the One UI experience is that Samsung has now integrated Google Duo directly into the dialler app. You can make video calls directly in HD now. Additionally, there is a new Music Share feature that uses Wi-Fi and Bluetooth to let your friend connect to any BT speaker through your passthrough. If you want to share music with your friend inside a car this could come in handy.

So, while the phone has a massive 4500mAh battery, the Exynos 990 chip along with the 120Hz refresh rate panel does put some stress on it. I ran a comprehensive battery test on the phone and what you see on your screen right now is a breakdown of the battery performance with SoT details and how long it lasted me. So, with extremely heavy usage like mine, you can expect around 4hrs and 30mins of SoT on FHD+/120Hz resolution. And, the battery died in a little over 12 hours of usage. At 2K/60Hz it can last longer, up to 5hrs and 30mins on similar usage, which was about 18 hours of usage in my case.

And, if you drop it down further to FHD+/60Hz, you can expect 6hrs and 30mins or more of heavy usage, which translates to over one day of full usage. And, this battery performance has been consistent for me.

Is this good or bad? Well, it is not bad but it is not great either considering the SD865 variant should perform better. Anyway, you also get a 25W charger bundled in the box which can charge the phone from 0 to 100 in under 1 hour and 20 mins. Plus, you also get support for the 45W charging as well. Apart from this, Samsung now supports the Fast Wireless Charging 2.0 standard, but you need a 10W capable fast charger for it. And obviously, you can continue to charge other devices with wireless charging support by placing it on the S20+ thanks to Wireless Powershare.

By the way, I remember facing really bad network issues on the Galaxy S10+ last year on Airtel 4G in Delhi. Looks like Samsung has heard my concerns, the S20+ has the best call quality and network performance I have experienced from a smartphone yet. The earpiece is loud, so much so that I had to reduce the volume in most calls because anyone even 2 feet away from me could hear what I am talking crystal clear. Also, the 4G performance was stellar.

Yes, but should the S20+ have had support for 5G considering we have the iQOO 3 and the Realme X50 Pro in India with 5G-enabled. I think yes and especially because Jio has worked hard to build in-house capabilities to build 5G networks from scratch in India. That is just excellent news. I am just waiting for the spectrum auction to start in India now.

Should you buy the Samsung Galaxy S20+?

The S20+ is a loaded flagship that makes more sense for most people. At least from the price point. After spending 15 whole days with it, I am convinced that this phone at Rs 73,999 is actually a value-for-money flagship that deserves your attention. I have already recommended this phone over the Ultra to one person. Now, should you import the 5G-ready Snapdragon variant from the U.S. over the Exynos variant for more money? Well, maybe not this time. You can buy the Exynos variant from India if you are okay to live with the fact that you don’t technically get one of the fastest phones in the world.

Now, when compared to the iPhone 11, the S20+ is clearly a better phone. It has a better design, a better display, and a more versatile set of cameras too. Even the performance for everyday usage and gaming is not too different. In fact, gaming should be better on the S20+ compared to the iPhone 11 Pro. Mostly thanks to the tiny notch and gorgeous AMOLED panel. Only the battery life should be more efficient on the iPhone 11 but that’s about it. And, the other reason for picking an iPhone 11 over the S20+ at this price would be if you cannot live without the iOS ecosystem. 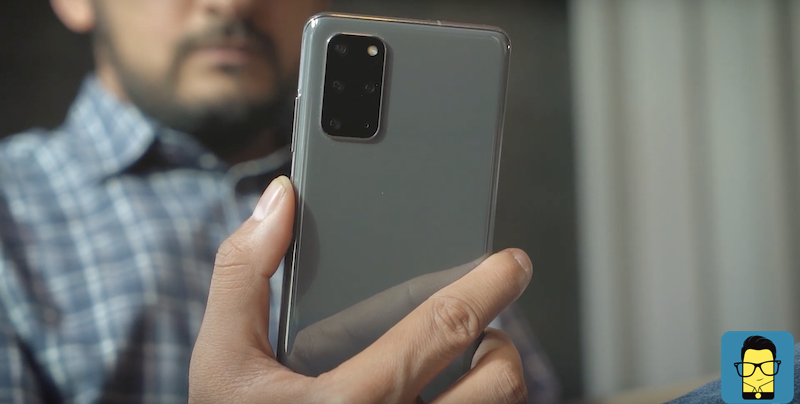 Same is mostly true for the iPhone 11 Pro, except for the fact that I love the cameras. It is the most refined set of cameras with consistently good results every time I use it. But yes, the iPhone 11 Pro is actually in the S20 Ultra price territory and that changes the whole conversation.

You know what? Even a couple of years ago, there used to be a perceptible difference between a high-end Android flagship like Samsung’s Galaxy S series and the iPhone, but now that gap is next to nil. It is purely an ecosystem play. And even in that scenario, Samsung has a pretty good chance to prove itself worthy now. What do you guys think?