Home | Reviews  | Samsung Galaxy Z Flip review – the best foldable yet but should you buy it?

Samsung Galaxy Z Flip review – the best foldable yet but should you buy it? 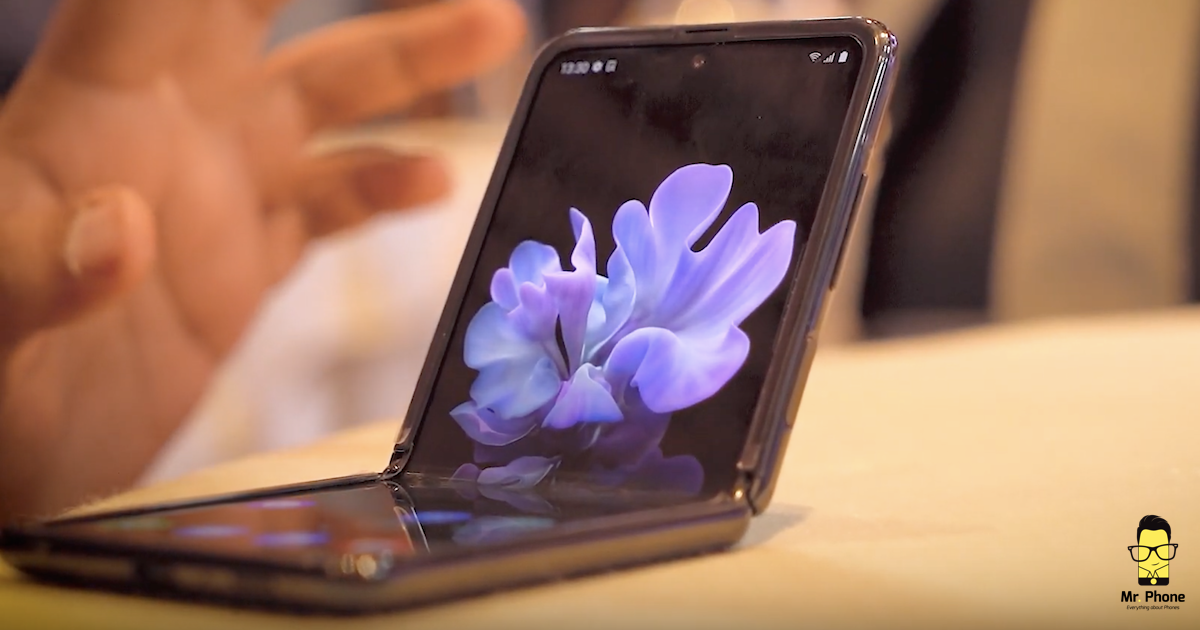 I can’t stop flipping the flip. This is by far the most satisfying aspect of using a foldable device. Anyway, this is Samsung’s second attempt at the foldable form factor. It is called the Galaxy Z Flip. How is it different from the first one? Well, instead of unfolding into a bigger tablet, this compact clamshell unfolds into a regular-sized phone. But, this is it. This is the form factor that makes the most sense to me.

Let’s get down to my review of the Galaxy Z Flip. 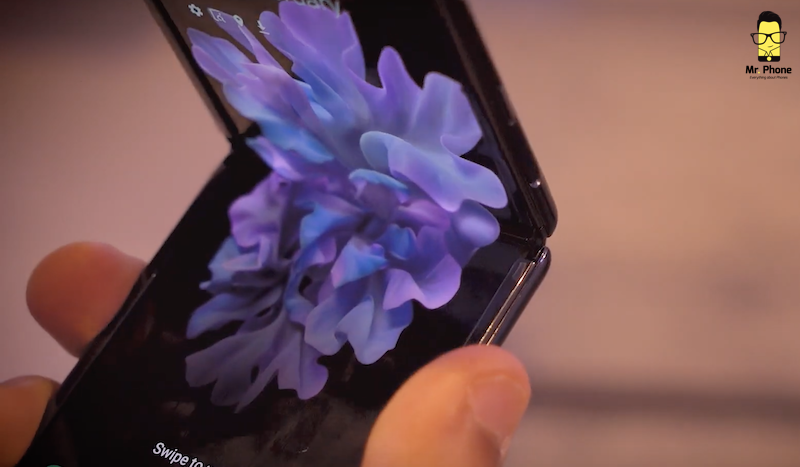 Okay, so the Z Flip’s appeal is the unfolding clamshell design. It comes in Purple, Black, and Gold but whichever colour you pick up, the Z Flip’s compact form factor is very Samsung-like. The industrial design doesn’t try too many experiments or invoke nostalgia like the Motorola Razr. Instead, it goes for refinement and near perfection. Here are the reasons why Z Flip’s clamshell design is better than the Razr: 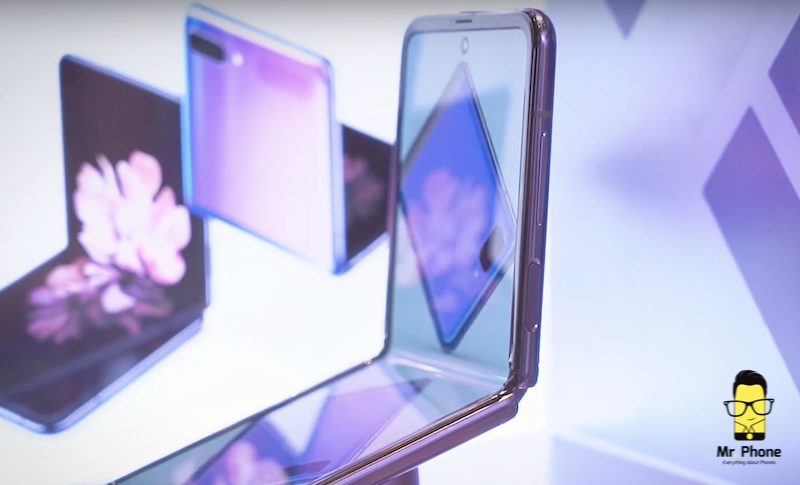 That said, there are many reasons why the Razr has a better design:

But, for a new form factor like a foldable, the most important thing is how much confidence does the design inspire in its sturdiness and its longevity? Well, after using both the devices, I am absolutely certain that the Z Flip will last longer. And, that’s great news. Furthermore, Samsung has put bristles inside the hinge to brush dust away. In the time I had the phone, I didn’t find that to be a problem either. But, these things can only be identified as an issue after prolonged usage.

Coming back to the design of the Z Flip, it is extremely pocketable but I really want the clamshell to become slimmer in the next generation. Plus, there’s still a perceptible gap between the two halves when closed. The next one surely needs to fold flat. As for the rest of the secure parts, you get two groove caps at the folding junction and tiny plastic protrusions on the bottom bezel to ensure the screen doesn’t get affected in long term usage. 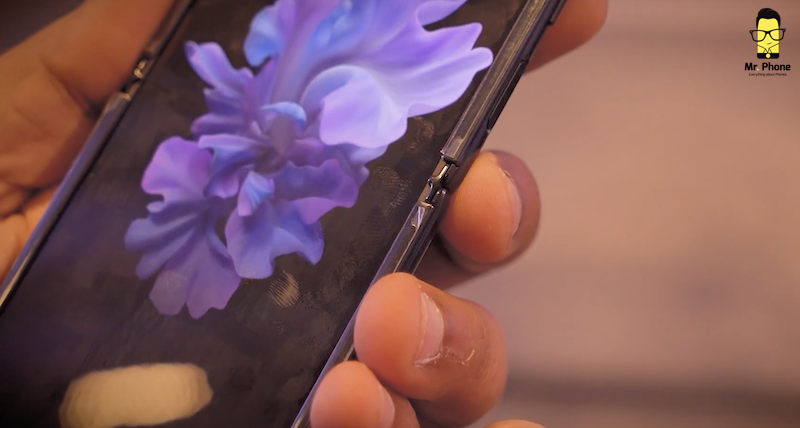 By the way, there’s no headphone but you get a USB Type-C port at the bottom along with a mono speaker right next to it. This speaker gets extremely loud, yes. But, it distorts at high volume. The power button doubles up as the fingerprint scanner and it is super duper fast. So is the face unlock but you’d rarely need it.

Z Flip display: Is it glass? Is it plastic?

The controversy around the Galaxy Z Flip’s display started after JerryRigEverything showcased how there’s a layer of plastic on top. Essentially, that is a protective layer under which is the new ultra-thin glass. For those who are buying my only advice is that you should take care of it carefully and ensure that the display is not close to any sharp objects or you don’t add pressure to it. 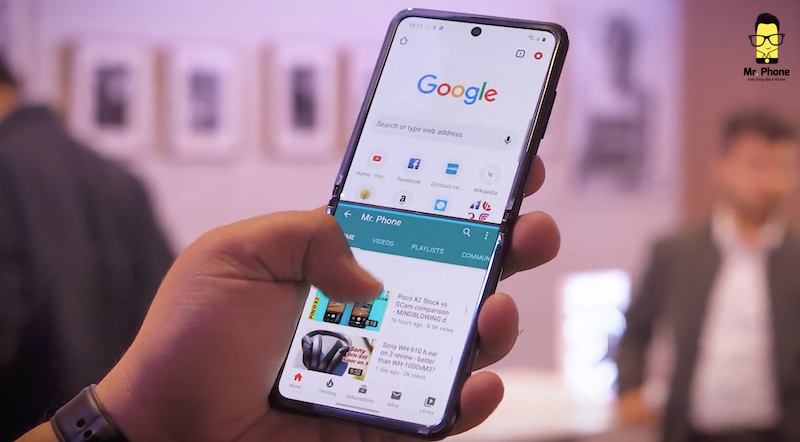 What I can tell you guys is how it feels during everyday usage. It feels very soft to touch and the vibration feedback makes it feel even more fluffy. It is a very different sensation. Now, there is a crease obstructing the usage and it is definitely visible when light falls directly on it. Moreover, my smartphone interaction involves more vertical scrolling than horizontal swiping, and therefore I was slightly more annoyed by the crease on the Flip than on the Fold.

The display itself is a large 6.7-inch Dynamic AMOLED panel with a resolution of 1080×2636 pixels. This translates into the tallest aspect ratio yet on a smartphone of – 22:9. Now, this aspect ratio does cause some issues. For example, some apps struggle with resizing and that causes warping. Also, videos on YouTube have a thick black bar on either side. I particularly noticed that in COD, while wide-screen gaming was a fantastic experience visually, I had to realign my muscle memory for the trigger button. I was constantly hitting the blank space and missing shots. But, once I got accustomed to it, the experience was simply excellent. 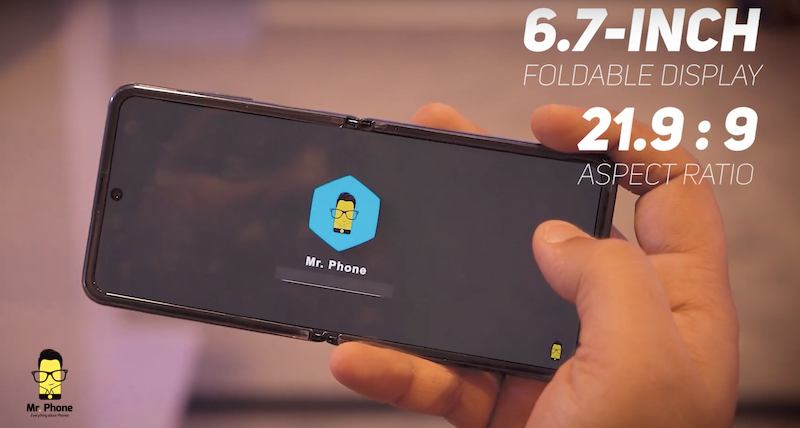 Now, since this is a Samsung phone the display is excellent when it comes to colour reproduction and crispness. But, the brightness felt a little low to me compared to the other flagships. Here’s something interesting I noticed. When I was making calls, the ambient light sensor was right next to the tiny centre punch hole. It would blink vigorously. Looked damn weird at first but made sense to me that it is under the display.

Coming to the tiny display on the front, this 1.1-inch panel showcases tiny notification icons and the time generally. But, you can use to accept or reject calls or use it as the world’s tiniest viewfinder for capturing pictures. I rarely used this display in my time with the phone. Also, it makes sense that Samsung added a tiny front display because otherwise what would they add in Flip 2 as an upgrade?

As for the software, Samsung’s only major tweak is the Flex mode that comes in handy when you are using the Z Flip’s top portion of the display at an angle. Now, this flex mode could’ve been more refined because most of the time you end up fiddling to find the right angle. Anyway, you can currently use the Flex mode in the default camera app and it is a useful feature for sure. Support for YouTube, Google Duo and more apps are coming soon. 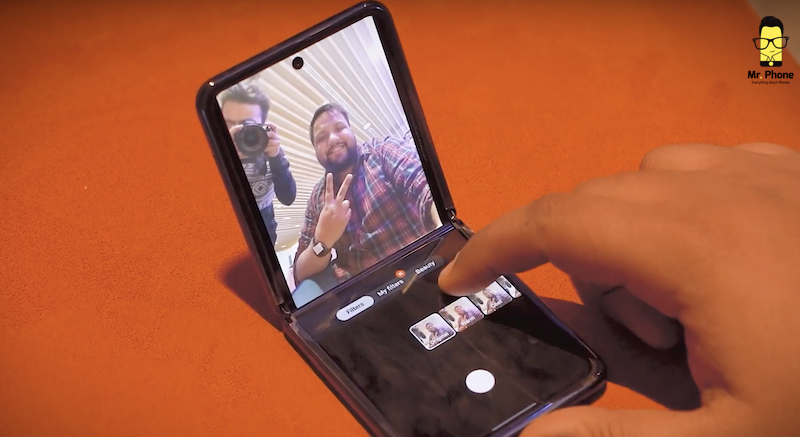 As for the rest of the software experience, you get the clean and neat OneUI 2.0 interface for interacting. It works well.

See, the Z Flip comes with a SD855+ chip, 8GB of RAM, and 256GB of UFS 3.0 internal storage. These are the best specs on a foldable phone and it performs exactly well too. I had no problem with gaming or day to day usage.

Z Flip camera: good but not the best

So, the Z Flip has a 12MP dual rear camera setup. You get your primary camera and an ultra-wide one. It takes fairly good pictures in daylight and the videos are great too, especially because you can shoot at 4K 30fps with HDR10+ just like the Note 10+. 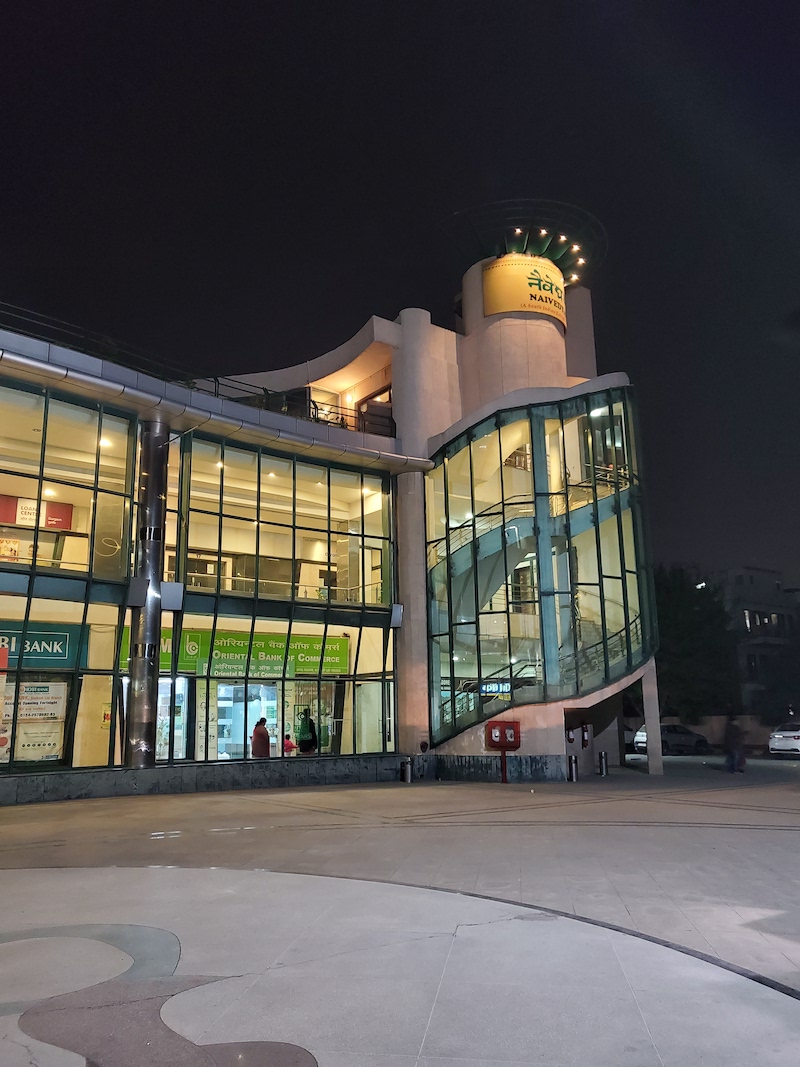 The selfies from the front camera look pretty good with the warm facial tones and great edge cutout in self-portraits. The Night shots look pretty appealing too. 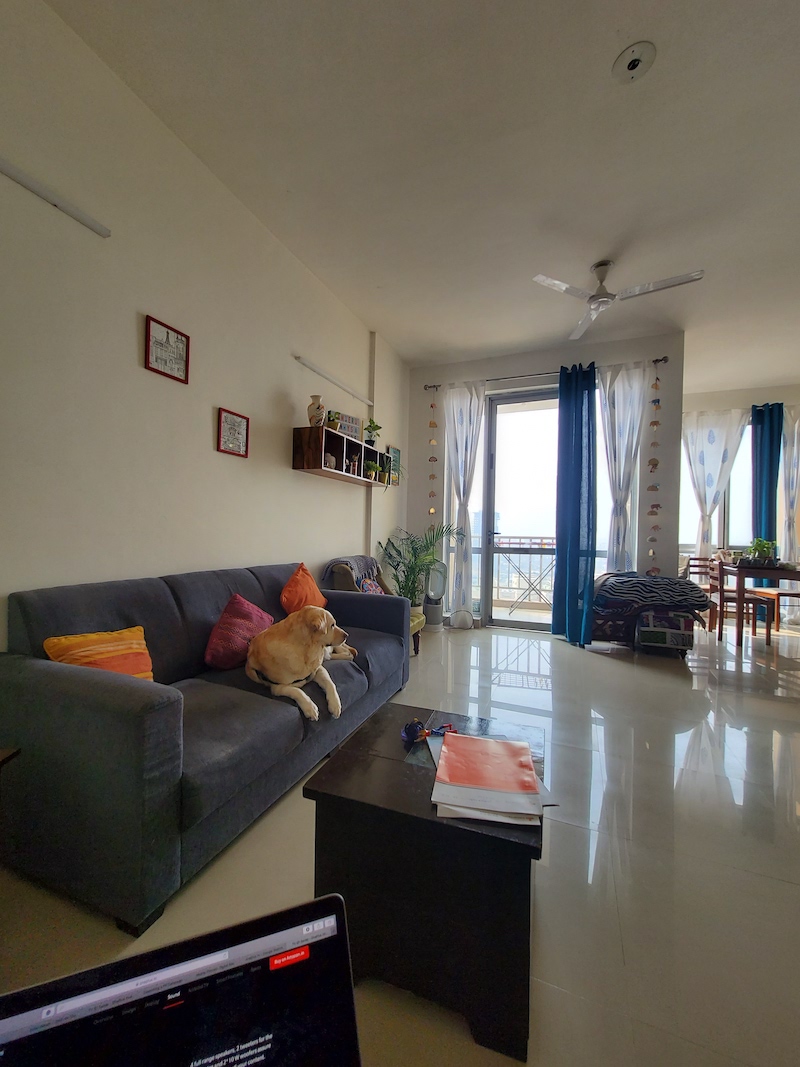 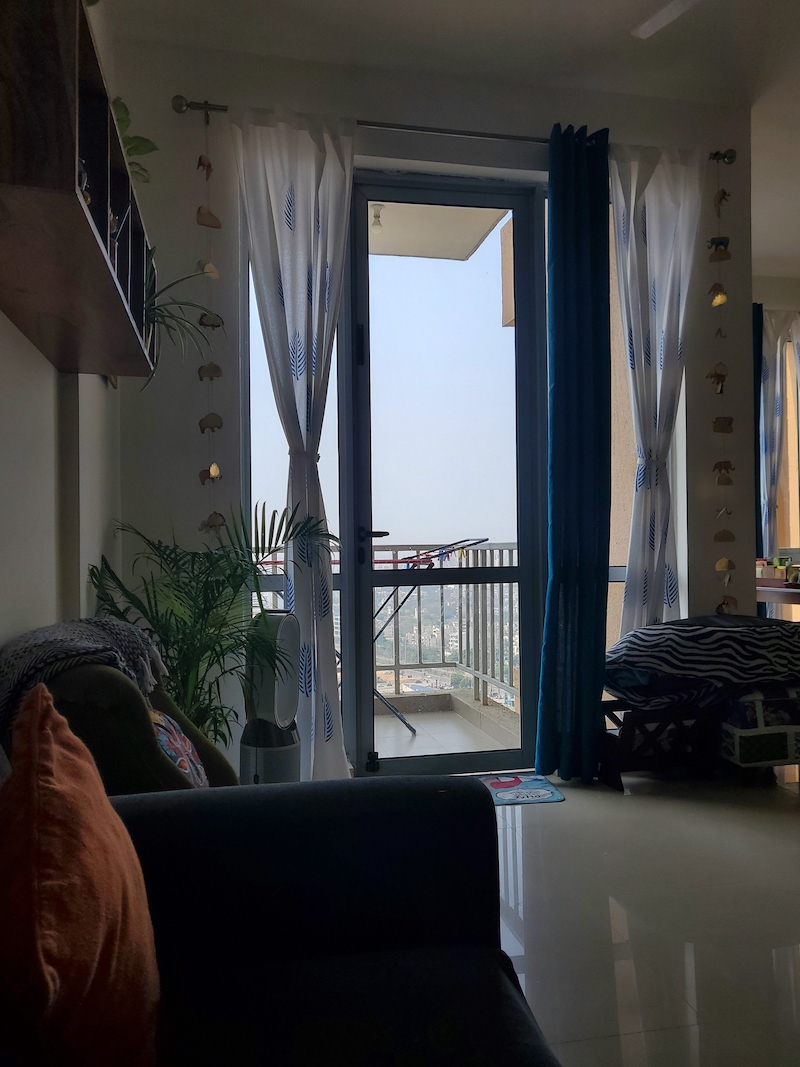 Having said that, if you want a flagship phone for the best camera performance this is not it. The S20 Ultra and the iPhone 11 Pro are definitely better phones for photography. 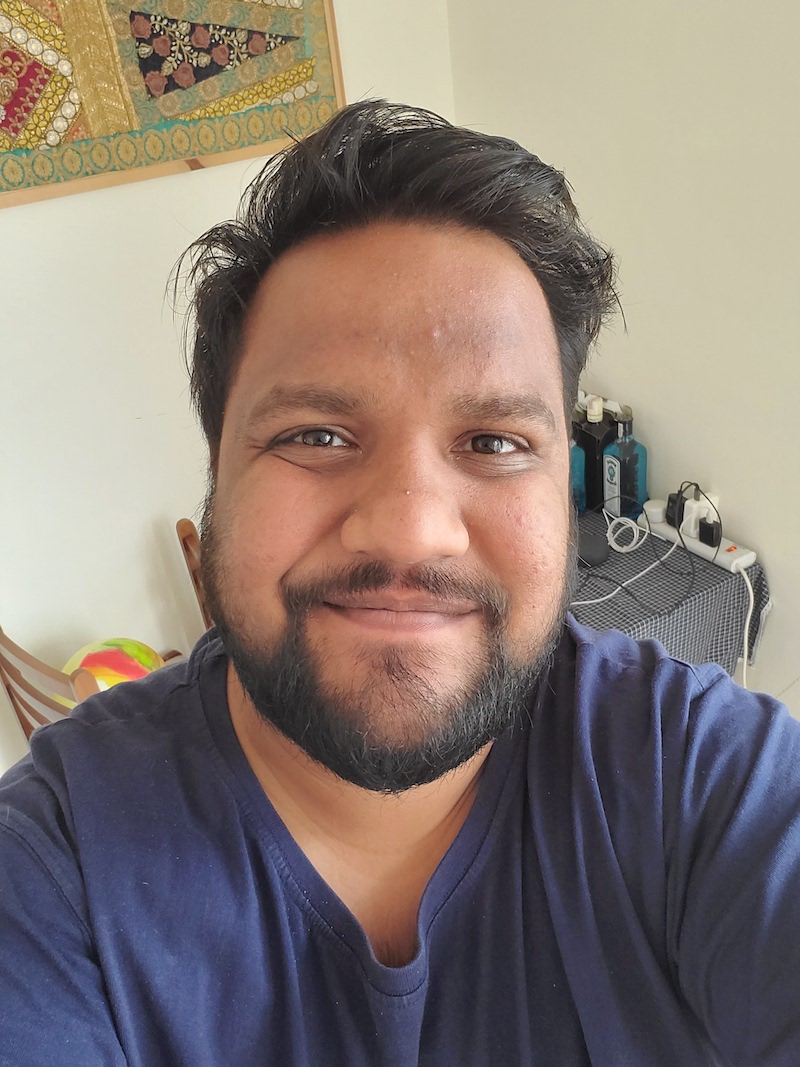 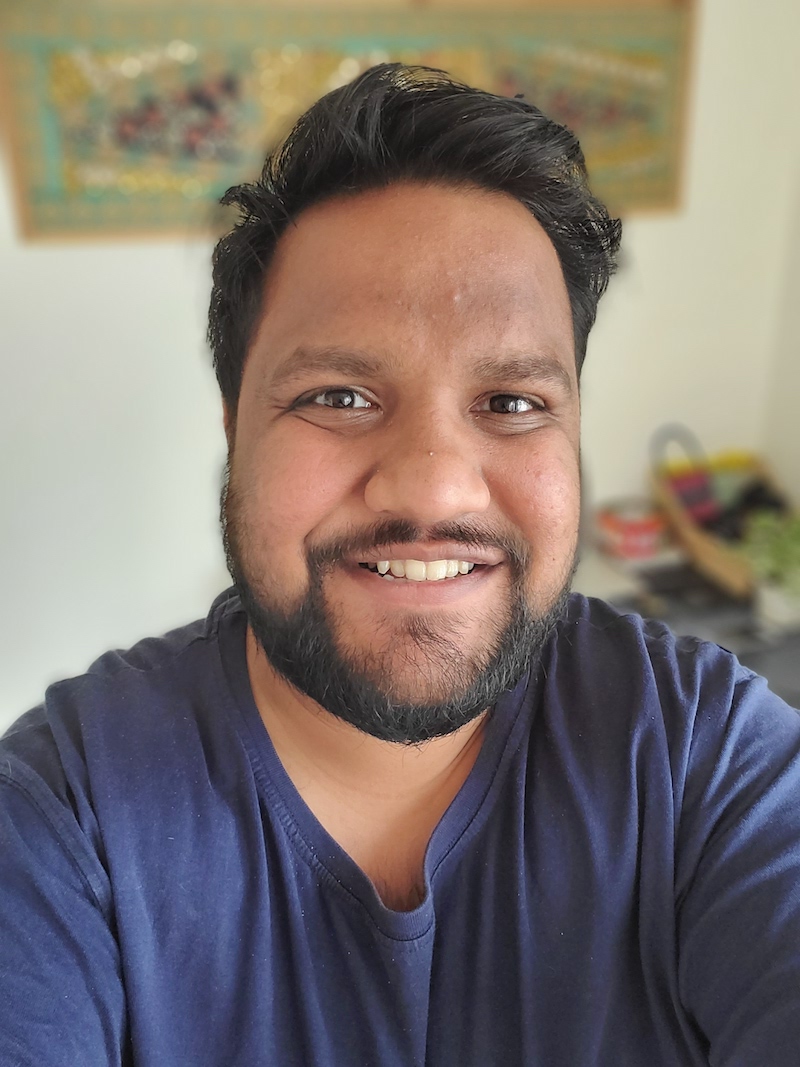 The Z Flip comes with a 3300mAh battery that is split into two halves. There is a wireless charging pad at the bottom half with the ability to reverse charge products as well. This is a first for a foldable form factor.

Anyway, this battery takes about 2 hours to charge from 0 to 100 using the 15W bundled charger. It would’ve been nice if Samsung had added support for at least 25W fast charging. So, this battery lasted me about a day on a full charge with 4hrs 30mins of Screen-on-Time. This par for the course when it is a small 3300mAh battery. Could be better, though. 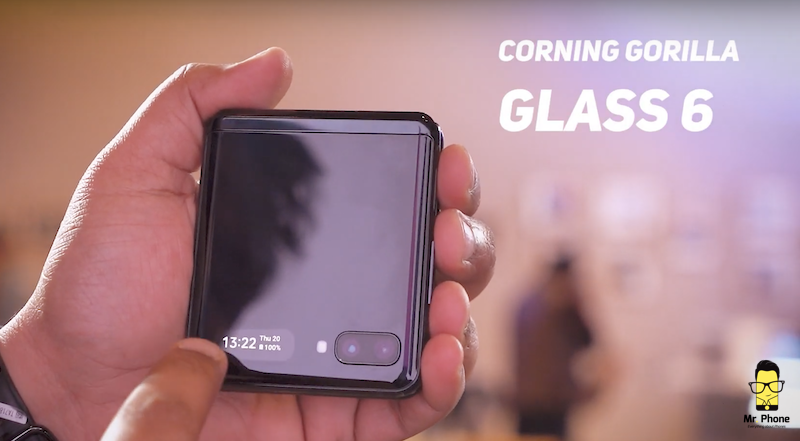 Network performance on the Z Flip was absolutely fine. But the earpiece is not as loud as the S20+ that I’m testing alongside. Oh, and BTW, you can shut to end calls but cannot open to receive them.

Should you buy the Z Flip?

At around Rs 1,10,000, the Galaxy Z Flip is one of Samsung’s most expensive phones to date. Having said that, it is also one of its most innovative ones. And, the best part is that innovation doesn’t hamper general functionality for you to worry about it.

I am convinced that the Galaxy Z Flip is the best foldable phone yet with the best performance as well. And therefore, if you are planning on buying one just pull the trigger eyes closed. This is most definitely a better foldable phone overall compared to the Moto Razr. 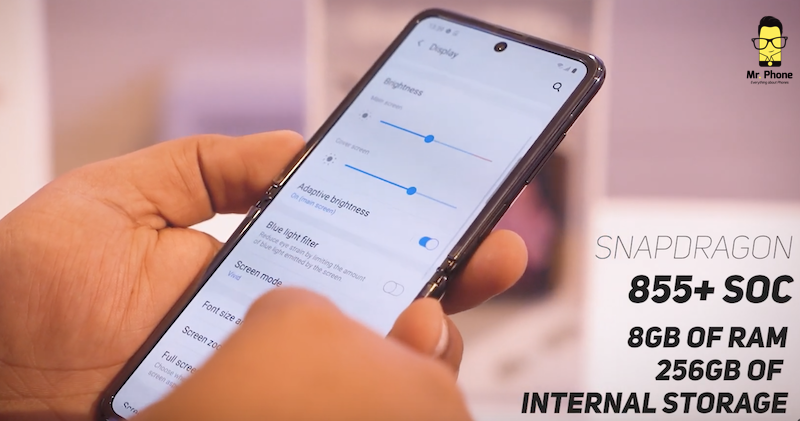 So, that was my review of the Galaxy Z Flip. Hope you guys found it useful. Until next time, this is Ershad from Mr. Phone signing off. Goodbye and godspeed my friends.