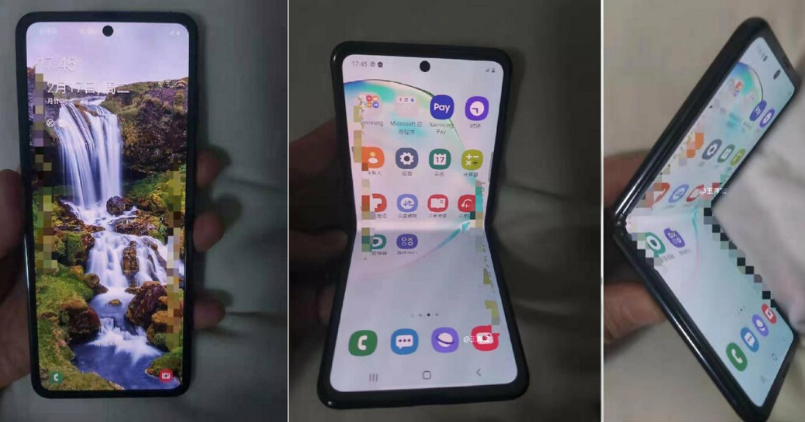 Samsung wasn’t able to massively sell its Galaxy Fold, but it sure did make an impact as far as bringing foldable phones to the market is concerned. The South Korean maker already shared its plan to introduce a successor at the Developer Conference back in October. Now a set of live images has been leaked online showcasing the device in the real world. Let’s find out what we learned about the Samsung’s next foldable phone.

These live images surfaced in China gives us a clear look at what could be the next Samsung foldable smartphone in 2020. Sporting a clamshell design, very different from what the first-generation Galaxy Fold sported. The vertical foldable smartphone folds into a square form factor when closed.

Another distinguishable design is the addition of the punch-hole camera. The placement particularly feels aligned with the leaked designs of the Galaxy S11 lineup next year. It’s interesting to note the alignment with its flagship S Series.

Further talking about the leaked live images, it’s noticeable that there will be dual-rear cameras setup. The camera setup can be seen beside the small screen showing the time. Samsung might not introduce a full-fledged screen on the outside as we saw on the Moto Razr revealed a month ago.

The earlier leaks reveal that it could be sporting a 6.7-inch foldable display and a 1-inch cover display. Coming to the camera specs, it may pack the recently introduced 108MP ISOCell camera sensor by Samsung. At this point, it’s too early to say anything. But looking at these images, Samsung seems to be on more than the development stage.

What do you guys think of Samsung’s next foldable phone? Let us know in the comment section below.