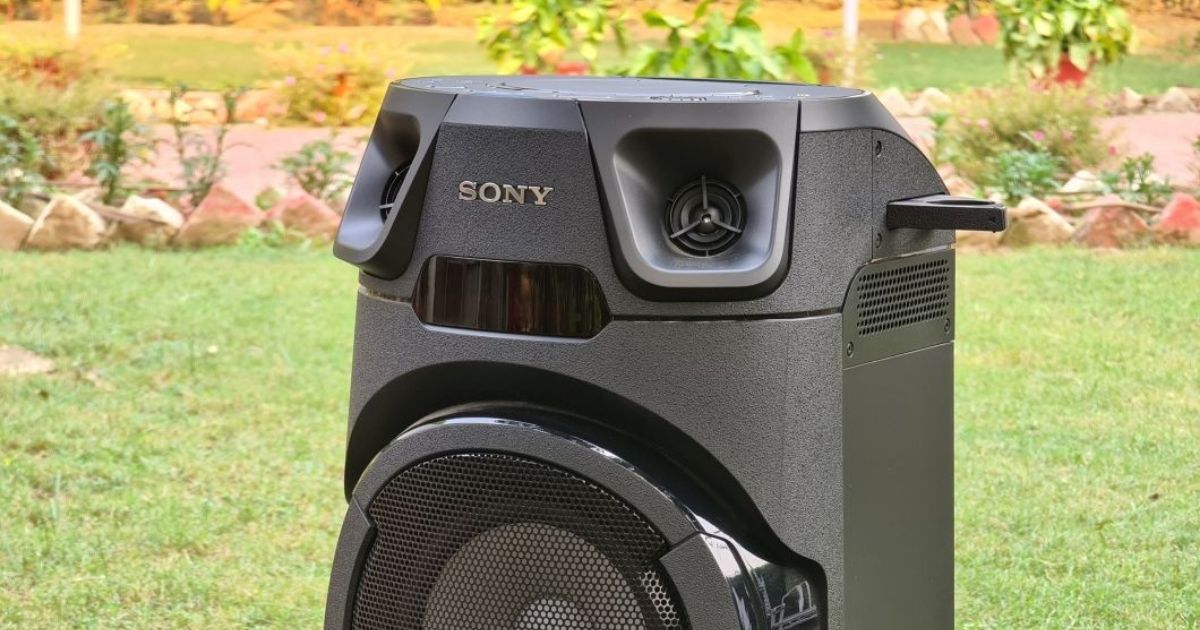 If you’re in the market for a loud, all-encompassing party speaker, then chances are you might’ve stumbled upon Sony’s offerings and in particular, the brand’s MHC lineup. If not, and you’re planning to throw a soiree anytime soon, then you might want to take note as the all-new MHC-V13 will be in my opinion, the life of your next party. Here’s why.

The Sony MHC-V13 party speaker has been wilfully, built like a tank. After all, you’d want the speaker to outlast your longest parties and withstand a chaotic atmosphere. To that note, the unit’s exterior has been constructed using hard plastic, which should keep scratches and scuffs at bay. The hardened exterior has been further solidified at the base of the unit, in particular, the corner edges as they’ll bear the brunt of moving the speaker from one room to the other. Speaking of which, the Sony MHC-V13 does ship with a carrying handle, however, I would’ve much preferred a trolley mechanism, the likes of which you might’ve seen on LG’s RK3 Boom party speaker. As such, at 8.1KG, the unit isn’t the most carry-friendly but, I digress. 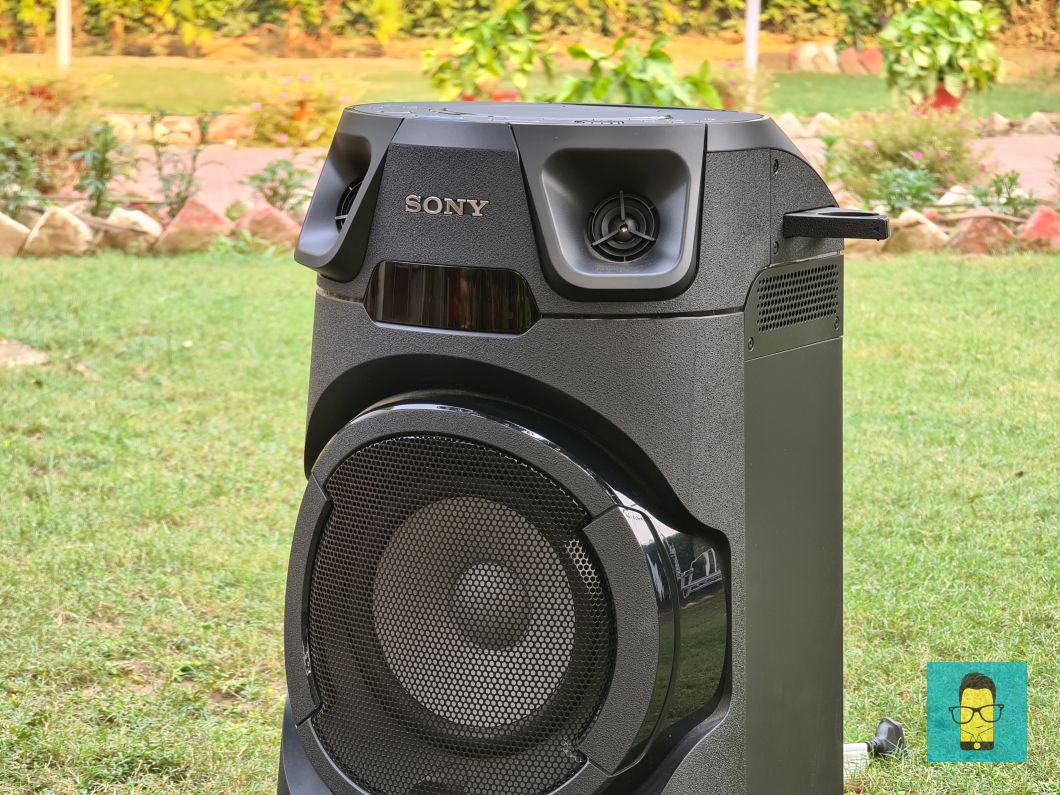 On the whole, I like how Sony’s entry-level speaker gels with my house decor. Unlike its pricier brethren, the V13 model sent to me for review doesn’t come across as a towering hunk of plastic and it doesn’t draw too much attention to itself. That is, with the power turned off as the second you plug it in, the LED lights plastered on the front of the unit come to life, transporting you and everyone around you to a rave. The front speaker LED plays a crucial role in setting the tone for the party and although it doesn’t sync to the music you’re playing, it still looks pretty darn cool. You also have the option to turn the LED light off completely, which can be done by pressing the ‘speaker light’ button on the top of the unit. 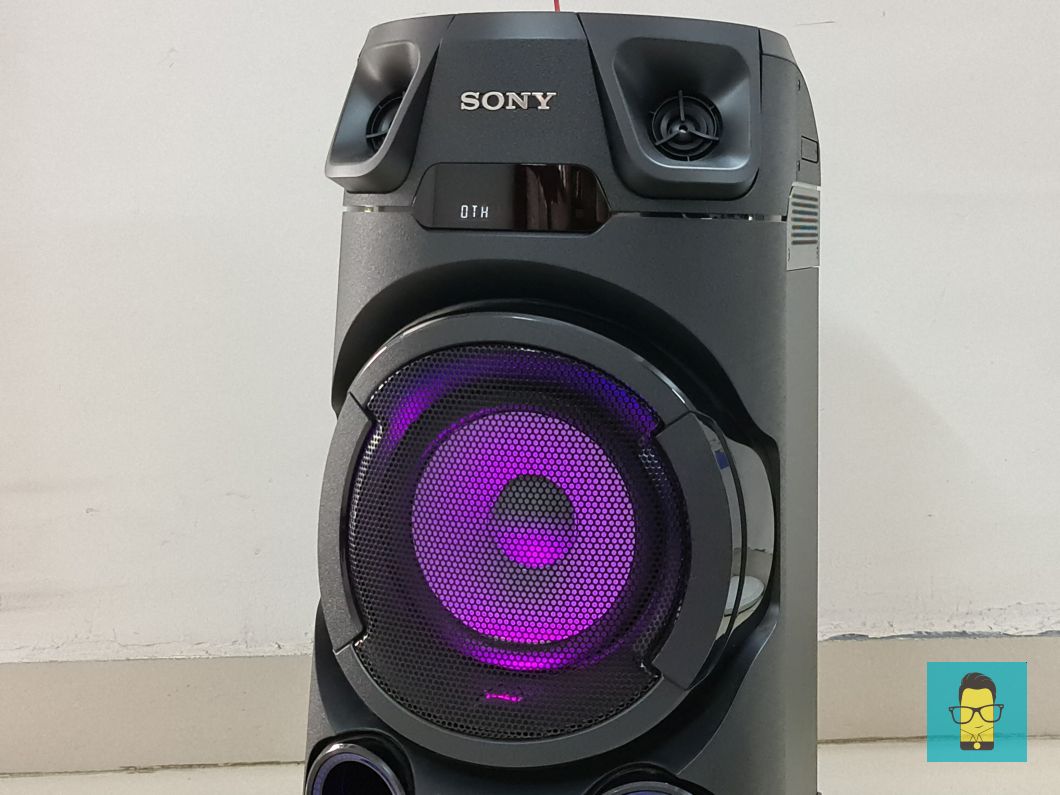 That neatly segues us into the final design aspect of the MHC-V13 party speaker – the buttons and the I/O. Towards the top of the unit, you’ll get a bunch of different buttons to change the speaker’s SQ, variate the volume level, and even a jack to connect a karaoke mic or an electric guitar – yes, you can, in fact, use the MHC-V13 as an amp for your guitar. The speaker even offers three different modes here, including Clean for a clear sound, Overdrive for a distorted guitar sound, and Bass, should you want to connect a bass guitar. All the buttons have been neatly labeled, ensuring you don’t have to rely on guesswork or hit-and-trial to figure out which button does what. 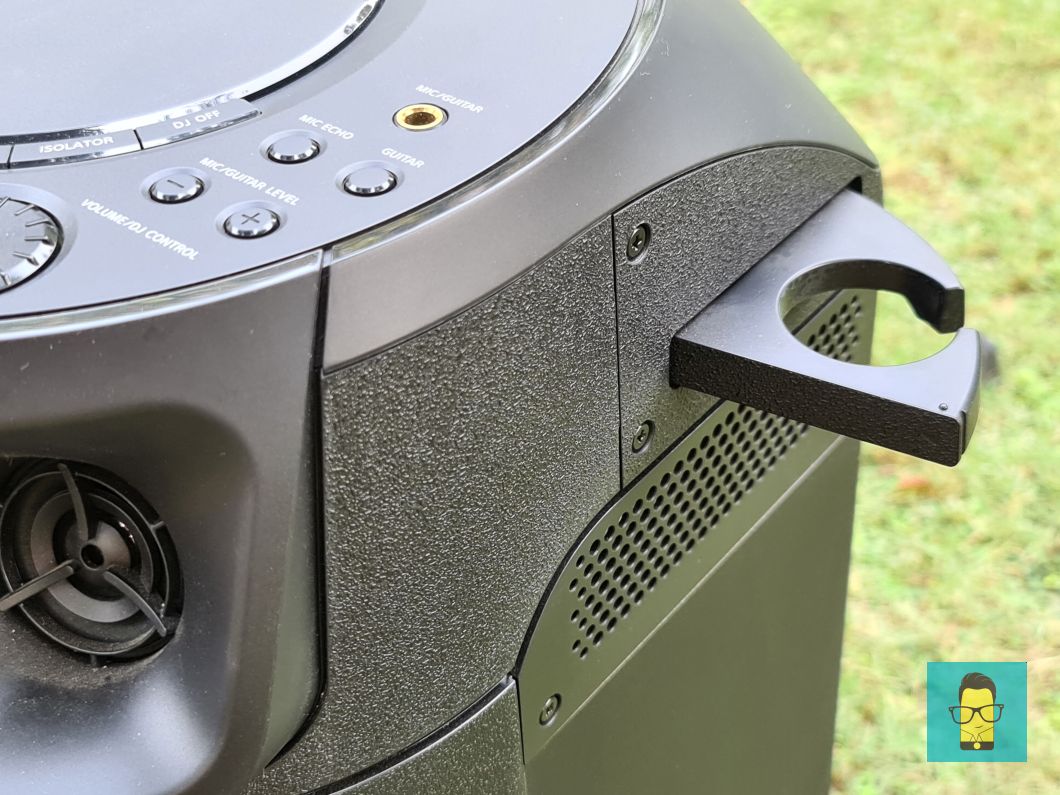 Furthermore, the speaker also comes with a retractable holder to holster your karaoke mic, along with a CD-player, ensuring your old-school DVD rips no longer have to sit and collect dust in a corner. Towards the back, you’ll find a USB Type-A port to plug in your pen drives, along with a line-in jack which can be used to connect your phone to the speaker.

So, how does the MHC-V13 sound? From where I stand, pretty good but before I dissect the unit’s sound quality, let me run some numbers by you. So the Sony MHC-V13 comes with a pair of horn tweeters and a 20cm woofer. The unit can be paired to a media device via a wired connection or Bluetooth and in the case of the latter, the speaker offers music playback over LDAC and AAC codec. Quite interestingly, I couldn’t find any peak or RMS rating for the unit’s output and upon reaching out to folks at Sony, I was told that the company will not disclose said information. Correspondingly, I won’t be able to put a number to how loud the MHC-V13 gets but rest assured, it’s enough to wake your neighbours. 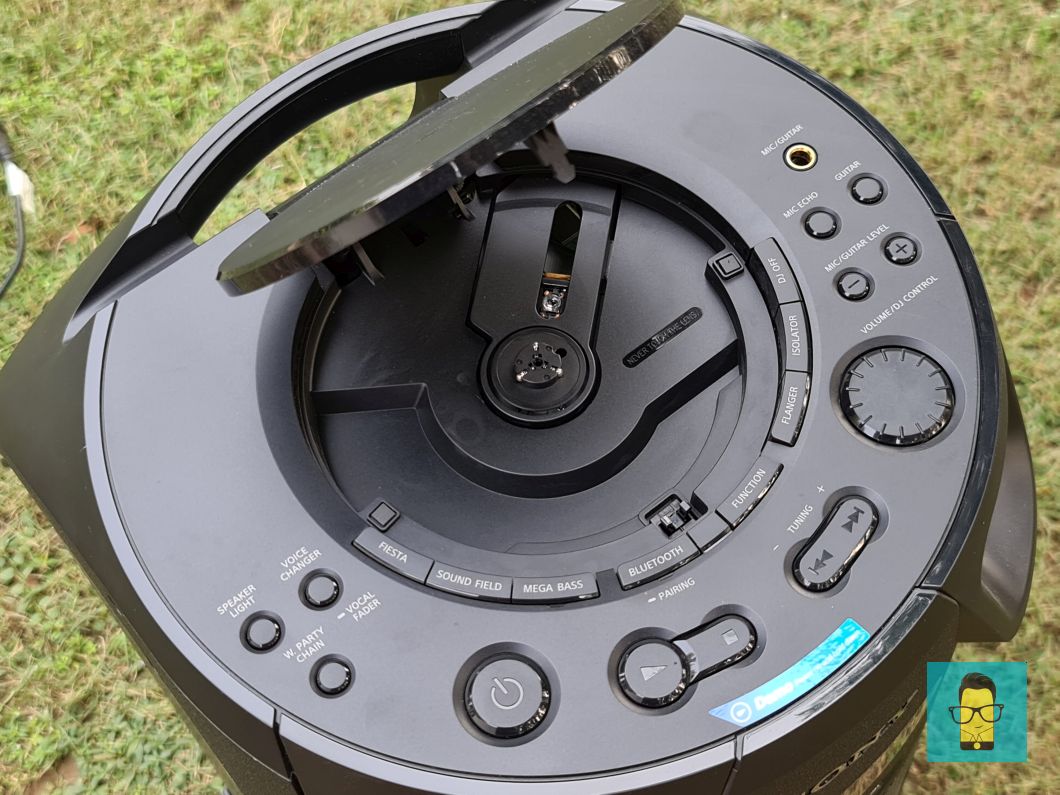 Unsurprisingly, the sound signature on offer here sways in the favour of the low-end but, thanks in part to Sony’s tuning and the bundled tweeters, the speaker does justice to tracks from other genres too. The bass output in itself feels quite refined for a speaker which is geared towards parties playing “Baby ko bass pasand hai” on repeat. Ergo, you will not only hear the powerful slam of a kick drum or the thumping bass line in tracks like Sicko Mode by Travis Scott, but you’ll also appreciate how the beat doesn’t linger on for long or colour the mid-range silly. In a nutshell, the vocals will not feel subdued and the beats albeit voluminous, won’t be the only thing you hear. 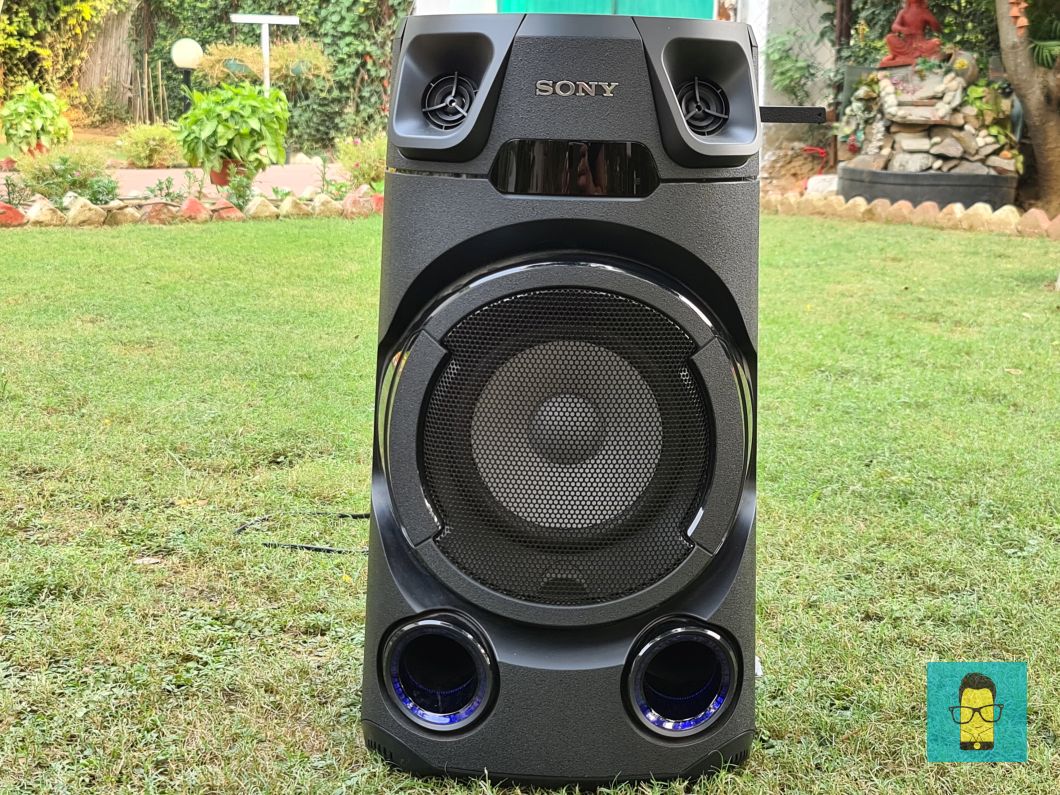 As for the highs, I was pleasantly surprised by the unit’s clean, distortion-free output which even at relatively high volume levels didn’t muddy the soundtrack. Listening to Burn One Turn One by Stone Sour, riffs from the electric guitar were easily discernible, even during the track’s chaotic chorus. In a similar fashion, while the guitar strums in I think I smell a Rat by the White Stripes don’t offer an edgy bite, they were still sparkly enough to tickle my fancy.

In terms of connectivity, I didn’t run into any instances of track skips during my time with the Sony MHC-V13 and the speaker maintained a rock-solid Bluetooth connection to my paired devices. Furthermore, as I hinted before, the speaker can get audaciously loud – so loud that I didn’t dare turn the volume dial all the way to 100. In fact, you’ll be able to fill a moderately big room at just 50 percent volume level.

So, for its asking price of Rs 16,990, should you invest in Sony’s latest Home Audio solution, the MHC-V13? Well, I don’t see why not. The MHC-V13 can get really loud and it offers a durable design too – two quintessential features of a party speaker. Furthermore, you will not be compromising on the audio quality whatsoever and the unit can pretty much do justice to tunes from all genres. Correspondingly, if you’ve been on the hunt for something to elevate your parties, the MHC-V13 is it.