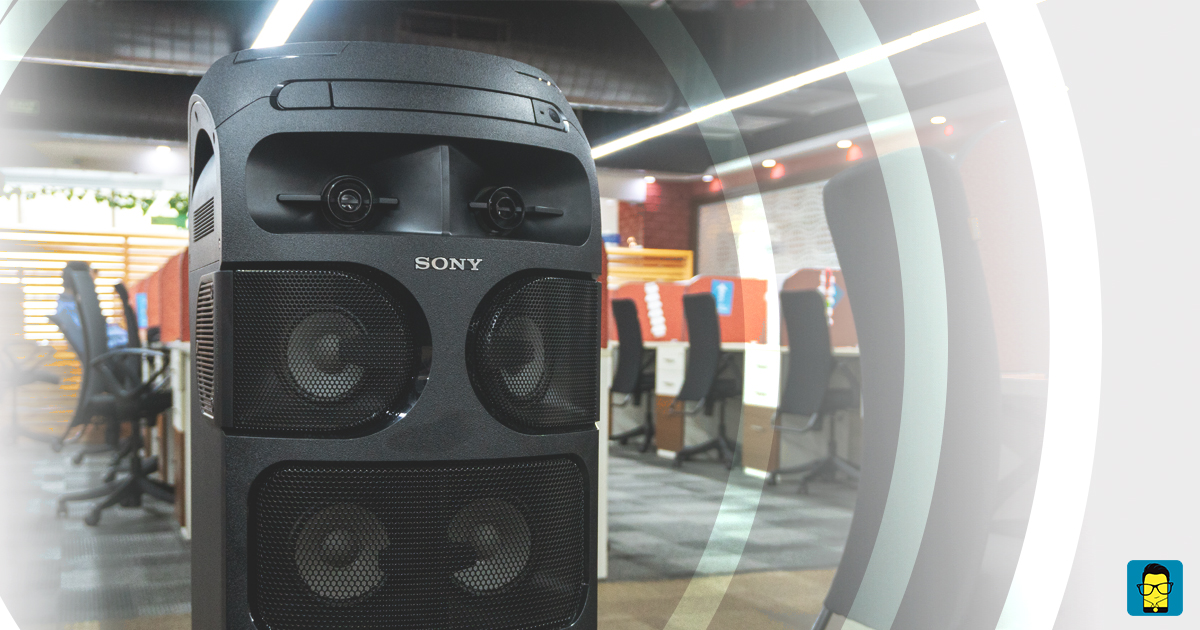 Sony India decided to send across a review unit of their newly launched party speaker to Mr. Phone’s office recently. When it eventually reached our office, I swear I had no idea they’d send across this monstrosity (take a look at the picture below).

Say hello to the MHC-V81D: an all-in-one Bluetooth speaker that will persuade your neighbours to call the police if you switch it on and play music. Because, this thing can get louuuuud!

In all honesty, I didn’t know party speakers were a thing before I actually saw them at IFA Berlin last year. They were all over the show floor. And obviously, Sony is one of the biggest players in this space. Actually, I am not surprised because Sony has been at the forefront of the music revolution. From cassette-based walkmans, to discmans, to boomboxes, Sony’s audio engineering history is legendary.

Let’s find out how the MHC-V81D fits Sony’s famed legacy. 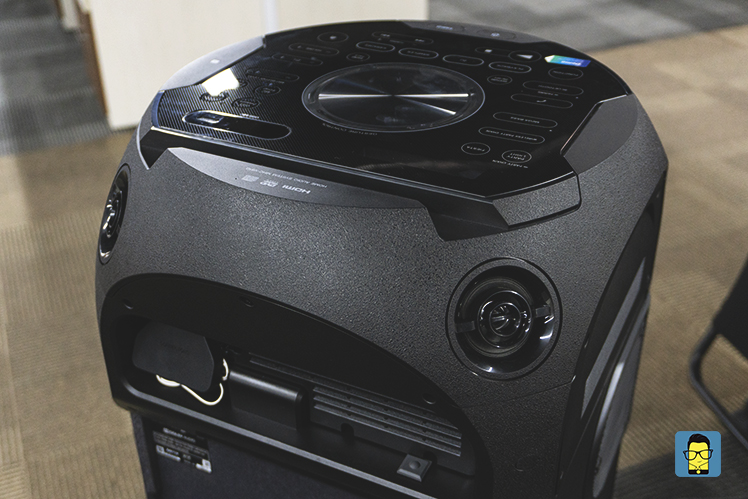 Sony MHC-V81D: the only feature missing is a washing machine

From the get go, you know that the MHC-V81D is one massive unit of drivers and crazy technology. However, I like the fact that despite its size, Sony has managed to keep the weight to 26kg. Also, there are wheels at the bottom making it easy to travel across different rooms by pulling the handle. Obviously, this thing is meant for big houses. Note this though, the MHC-V81D is not going to tuck away in the corner of any room and is going to command respect with its big size. So, people with small houses should look at more compact alternatives.

Let’s talk about the driver setup first. Inside the MHC-V81D you get two tweeters on the top and two on the rear. There are two mid-range drivers and a massive 30cm woofer as well. There are multiple connectivity options as well. If your phone has support for NFC, you can just touch it to the speaker and voila, connection established! Sony has bundled an FM player and a DVD player for good measure as well. So essentially, you can connect these speakers to your TV and play your old DVDs lying around. And, if you indeed have DVDs lying around in your house please write to me. I would like to profile you, because folks like you are rare in this era. 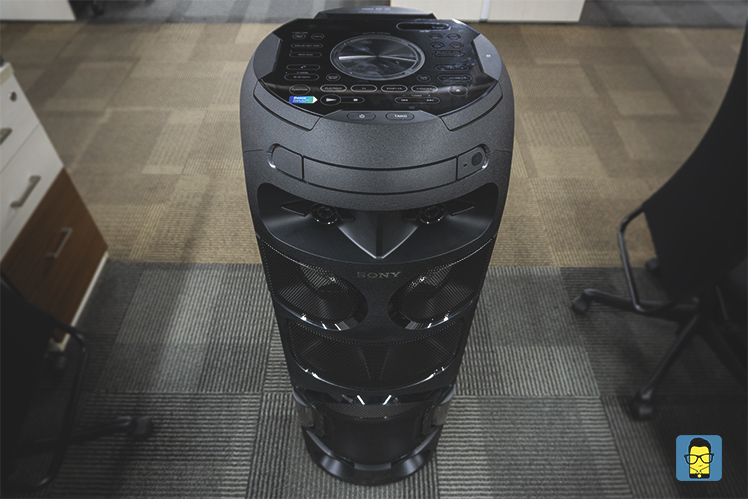 While you can connect and play songs on the MHC-V81D there’s an entire laundry list of features. Allow me to explain. You can play Taiko on it. Taiko, what? Well, Taiko is just Japanese for drums. Sony gives you the option to tap and play four different kind of drum sounds on the system. There’s also a game mode for the Taiko drums. But it’s all fun until someone gets extremely drunk and starts messing with it. Then it gets plain annoying. And it is a party speaker, people are bound to get drunk.

Oh, and how can I forget those lights. The 360-degree lights are meant to complement the 360-degree sound. Honestly, I find the lights tacky but boy can it gather a crowd or what! For some odd reason, every time we switched on the speaker in office people went nuts. Well I guess, I am the only grumpy old man in the office. 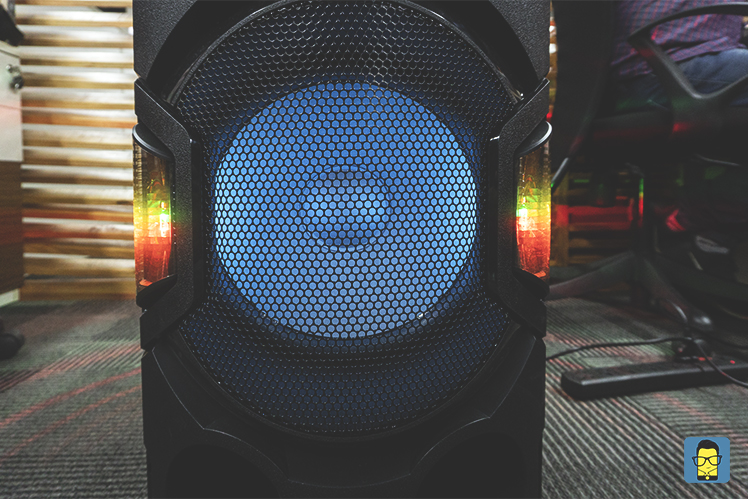 You can also control the speaker using gestures. Yup, it is cool. And, it works like a charm. There are inputs for two mics and you can croon to your favourite songs using the dedicated karaoke mode but I couldn’t test it out. So, I don’t know how it functions.

This list is seriously never-ending, and I could be missing out on a few features.

See, here’s the thing. The MHC-V81D are not your audiophile-grade bookshelf speakers meant for critical listening. These speakers are meant to shake the ground beneath you and they achieve that with ease. I mean, you can use the MHC-V81D to listen to soulful Rahman songs, but that would defeat the purpose of this speaker. As much as I hate the words I am about to write next, the MHC-V81D is meant for songs like Buzz by Aastha Gill feat. Baadshah. These speakers will ensure that you have the most ‘rocking’ – for the lack of a better word – party in town.

The speaker can easily fill up a 2000 sq foot space with ease. And, if you are feeling particularly ambitious, you can also hook up multiple Sony MHC-V81Ds together for a proper stereo sound. As far as the 360-degree nature of the sound is concerned, I think Sony has advertised it appropriately. You can indeed hear sound from any direction. 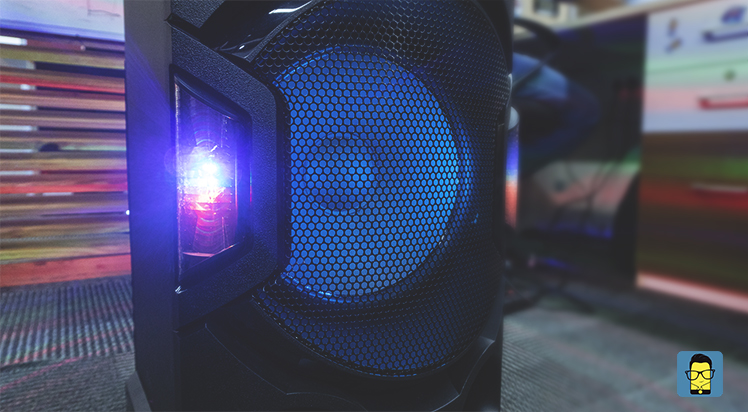 But, the one thing that it lacks is stereo spaciousness. However hard you try, it is difficult to engineer the sense of space for audio coming out from a single big block of angular drivers. Also, as far as the overall sound signature is concerned, the treble is heavily rolled off with the bass overpowering it. In fact, the bass overpowers the mids to some extent too but it isn’t as bad as it affects the treble.

See, you can also listen to mellow intricately laid out tracks all you want on the MHC-V81D but it really shines in EDM and Rock genres of music. This baby is really “all about that bass.” 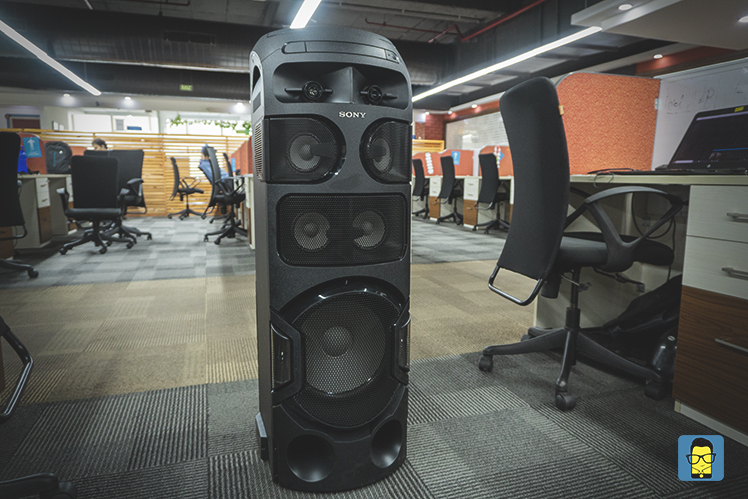 At a little over Rs 50,000 retail price, the MHC-V81D is an expensive proposition. For this price, you can get a decent 5.1 surround sound setup with a dedicated amplifier. But if you are someone who is looking for a bespoke audio speaker for wireless connectivity, these Sony BT monsters will fit the bill perfectly. There are cheaper party speaker alternatives but very few that can get as loud as this one.

Just ensure that no audiophiles are invited to this party.