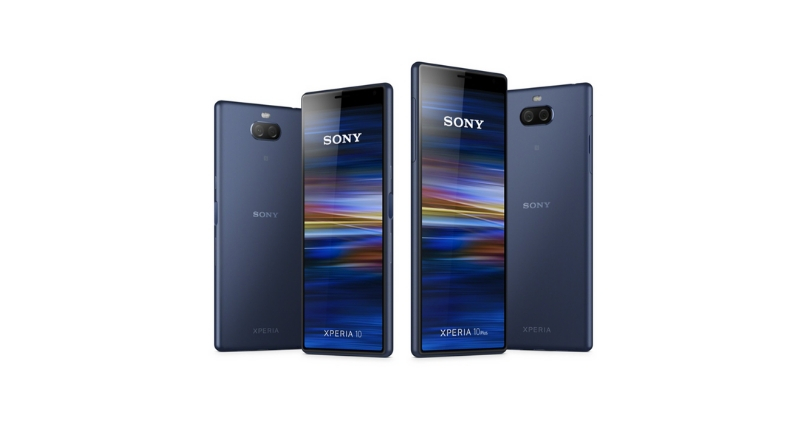 Sony has a lot to catch up in the mid-range since it lots its fair share over the years in the market. With the brand’s new phones dubbed as Sony Xperia 10 and Xperia 10 Plus, Sony plans to do so. Sony’s MWC 2019 announcement included three phones, the first one was its flagship phone, the Xperia 1. Now let’s talk about the Xperia 10 and 10 Plus specifications, pricing, and availability.

Sporting a 6-inch FHD+, it is an LCD display and would also be a 21:9 aspect ratio. Protected by a Corning Gorilla Glass 5 and offers side sensing tech. It weights at 162 grams and is sleek at 8.4mm thickness. The handset is powered by a Qualcomm Snapdragon 630 SoC, which is accompanied by a 3GB of RAM.

The internal storage includes a 64GB of internal storage (UFS) and offers expandable storage via microSD card slot. It will come in four colours, Black, Silver, Navy, and Pink. Running on the Android 9 Pie based on the custom software interface. The company teases LDAC, DSEE HX, and stereo amplifier for the better sound experience.

In the camera department, it has a 13MP + 5MP dual lens, it offers 4K video recording. On the selfie front, it has an 8MP selfie camera. All this is powered by a 2870 mAh capacity battery. There is a side mounted fingerprint sensor and 3.5mm audio jack available on this handset.

Sporting a larger 6.5-inch FHD+ LCD display with 21:9 aspect ratio, it is powered by a Snapdragon 636 processor. Accompanied by a 4GB of RAM and 64GB of internal storage with expansion support. The dual rear camera setup is of 12MP + 8MP, whereas the front camera is of the 8MP lens. All this is powered by a 3000mAh capacity battery. More or less the Xperia 10 and 10 Plus are similar in most aspects and different in screen size, processor, and RAM.

Sony Xperia 10 and 10 Plus pricing and availability

These new handsets from the house of Sony will be arriving on March 18 to be precise. Unfortunately, there is no pricing detail shared by the brand yet. Stay tuned to find out about the pricing of these handsets. Let us know how do you feel about these phones.