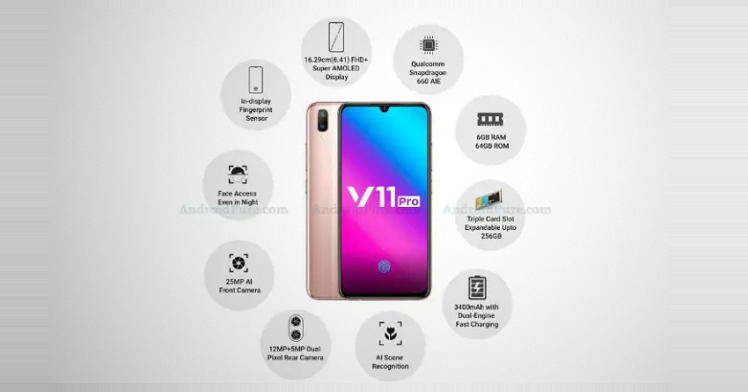 The Vivo V11 Pro, which you could say is the twin of the Vivo X23 in China, is launching on September 6th. Prior to launch, some pretty detailed promo material has been unearthed by Android Pure and is now floating around the Internet. Let’s take a quick look at what new information we can salvage from it.

Also read: Vivo X23 launch confirmed to be on September 6 in China

As the detailed leaks say, the V11 Pro has a 6.41-inch Full_HD+ Super AMOLED display and the water-drop notch that comes along with it. Also, this might be one of the most affordable on-screen sensor phone in India. But as long as the price isn’t revealed we reserve our opinions. As per the leak, it has a Qualcomm Snapdragon 660 chipset with a so-called AI engine. It is thought to have 6GB of RAM and 64GB of internal storage.

Moreover, it is dual-SIM and there’s an extra slot for a micro SD, so that’s great if it ends up being true. As for optics, a 12MP + 5MP setup is shown and a 25MP selfie shooter as well. The Vivo V11 Pro has a sizable 3,400mAh battery with fast charge and it could be priced anywhere around Rs 25,000. Meanwhile the Vivo X23 will also be launching on the same day, however, the event is in China.

One word of caution though. We cannot vouch for the legitimacy of this leak as there’s no way to know how truthful it is. Hence, we suggest our readers do not jump horses simply looking at the supposed promo material.