Vivo V9 review: now you can afford an iPhone X 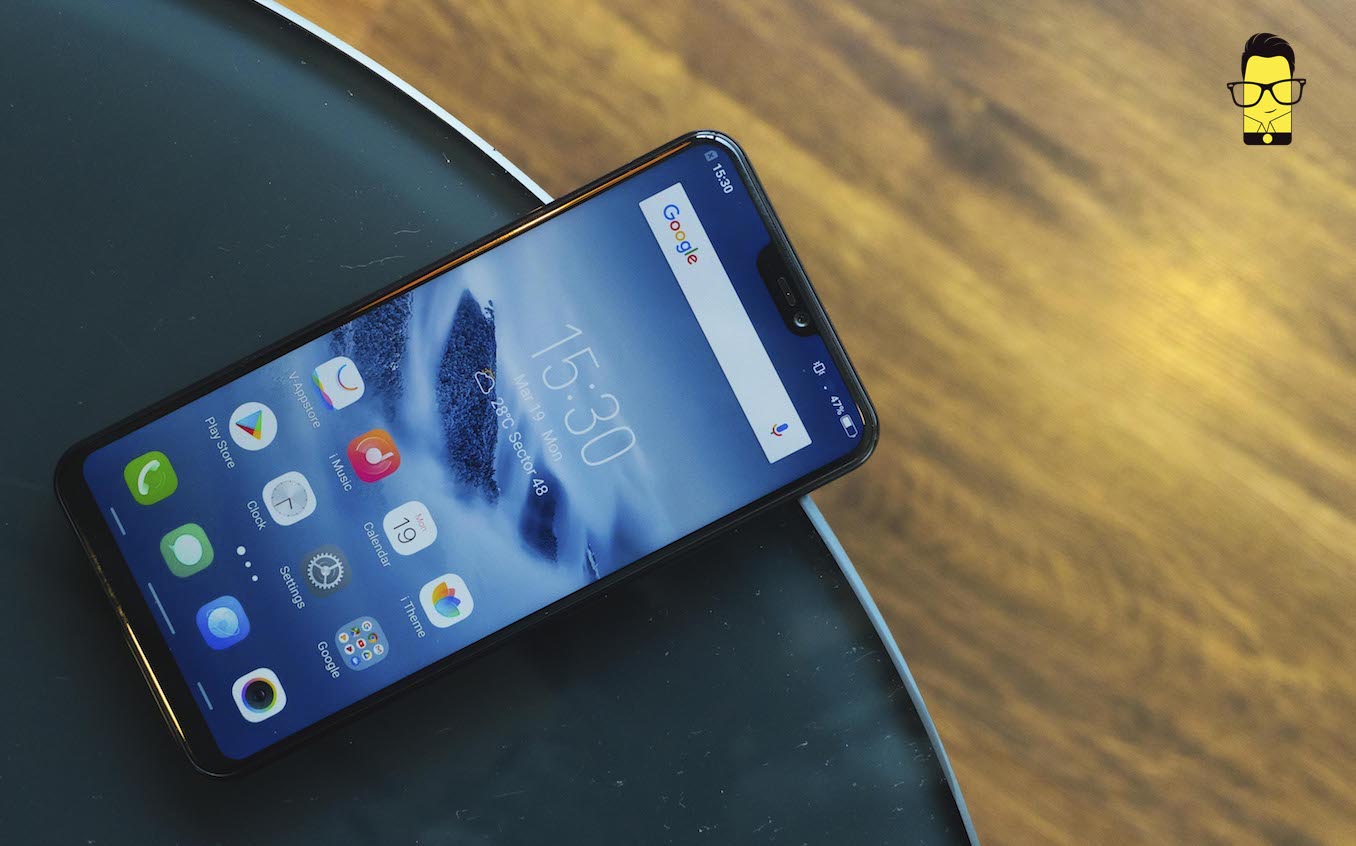 The invasion of the notch has started and we can do jack about it. All pun intended.

The first Android phone to hit the Indian market with an iPhone X-like notch is the Vivo V9. And the similarities don’t end there: the V9 is the closest you can get to an iPhone X-like experience on Android, right out of the box.

Intrigued? Well, read on to find in my full review of the Vivo V9. 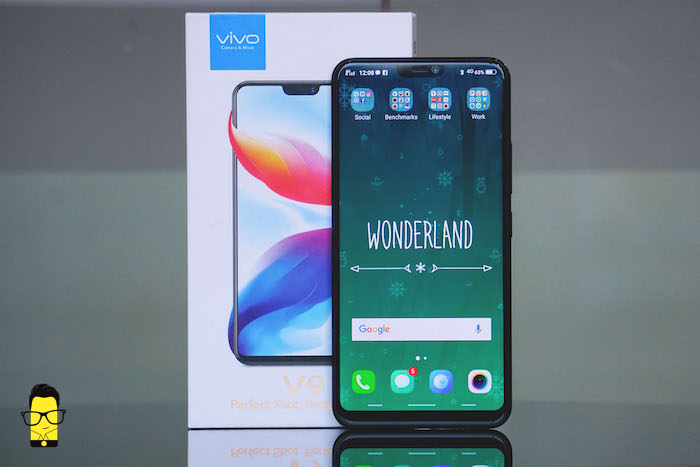 Smartphone displays with a notch gained traction the moment Apple launched the iPhone X. While I am not a fan of the notch, I must say that it does help in increasing the screen-to-body ratio of the phone by a huge margin. For example, when I took the Vivo V9 out of the box I refused to believe that this was a phone with a 6.27-inch display. Because when compared directly to phones like the iPhone 7 Plus and the Redmi Note 5 Pro, you will notice that the V9 has very similar dimensions as these two phones. And obviously, with its 6.27-inch 19:9 display you get more screen estate in the same space.

Interestingly, the 2.5D curved display is not flush with the body and it sticks out slightly. This creates a lip, and therefore doesn’t look or feel very seamless. You can feel the obstruction especially when swiping on the touchscreen. But this interaction design gripe of mine is more of a pet peeve than a genuine hinderance. You can easily look past it. Although, I doubt you can look past the chin at the bottom. Because unlike the rest of the tiny  bezels, this one is slightly bigger. As a result, it breaks the symmetry of the whole design. 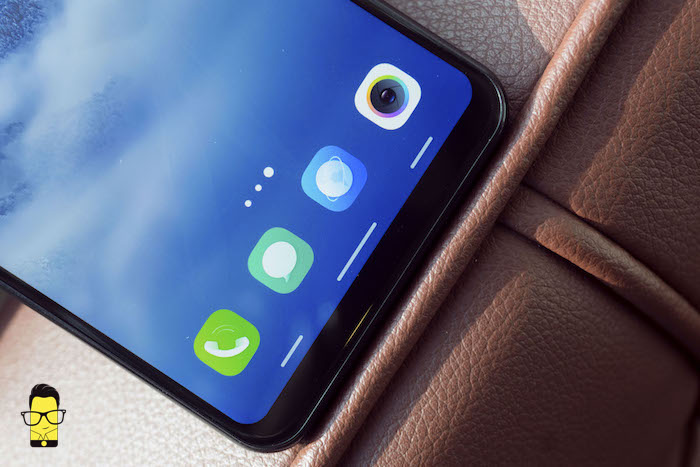 But, the bitter truth is that you are going to see more Android phones with a similar design. This is because IPS LCD panels – unlike AMOLED – cannot flex. And, therefore OEMs cannot curve LCD screen inwards without affecting the ports at the bottom.

Talking about the ports, there is a headphone jack, a Micro-USB port, and a single downward firing speaker all bunched at the bottom. Ideally, Vivo should’ve moved to the newer USB Type-C standard.

The power button and the volume rocker, both, sit on the right edge of the phone. But they are flush with the body and are not extremely tactile. On the right edge you get a tray for two SIM cards and a microSD card. Yup, this is not hybrid SIM tray and that’s definitely an advantage. 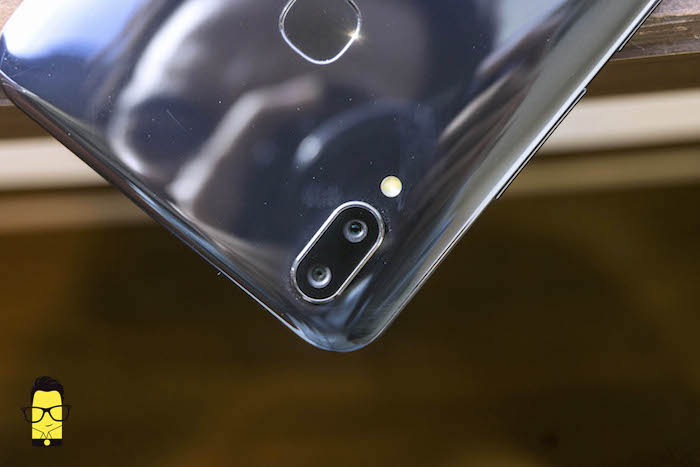 Turn the phone around and you will notice the phone has a glazed exterior, which is made of plastic. Vivo calls this colour Black ceramic. My review unit was prone to smudges and scratches, and it was clearly visible too, despite being Black in colour. However, I like the fact that the rear is curved, which makes it really ergonomic. And coupled with the 150g weight of the phone, you are bound to appreciate the in-hand feel. But let me tell you this, the V9 is a big phone. You cannot possible use it with one hand unless you are an ogre.

The housing for the dual rear cameras are placed on the top right corner. The fingerprint scanner is easy to access as well and it unlocks super duper fast. Here’s the thing though, the V9 is a reincarnation of the Vivo X21, which was incidentally launched only a few days prior in China. Now the X21 comes in a UD variant, which means that it has an in-display fingerprint scanner. Unfortunately, the V9 doesn’t have one. Evidently, mass production of under-display fingerprint scanners is still a long way away.

You do get the option of using your face to unlock the phone. It works fairly well but I still think the iPhone X’s face unlocking method feels more secure and the OnePlus 5T’s is a lot faster. 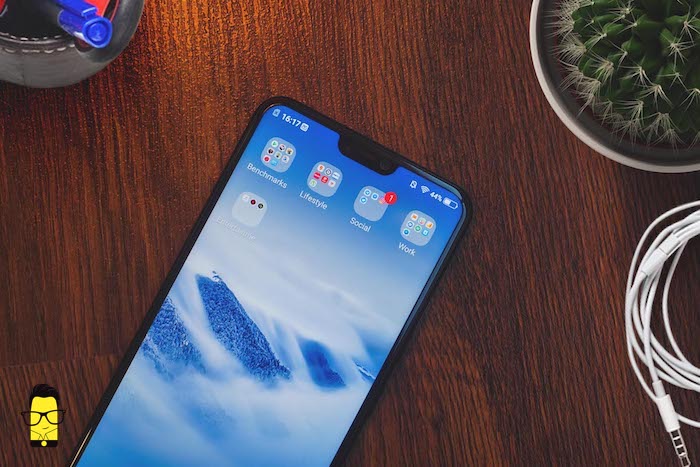 Like I mentioned before, the V9 has a 6.27-inch IPS LCD panel with a 19:9 aspect ratio display to incorporate the notch. Also, I am really happy about one thing. The V9 is the first Vivo phone in India with an FHD…or in this case an FHD+ display. The V9 offers a resolution of 1080 x 2280p and boy is it crisp! It is the best display on a Vivo smartphone yet, and that is a good enough badge of honour as far as I can tell. 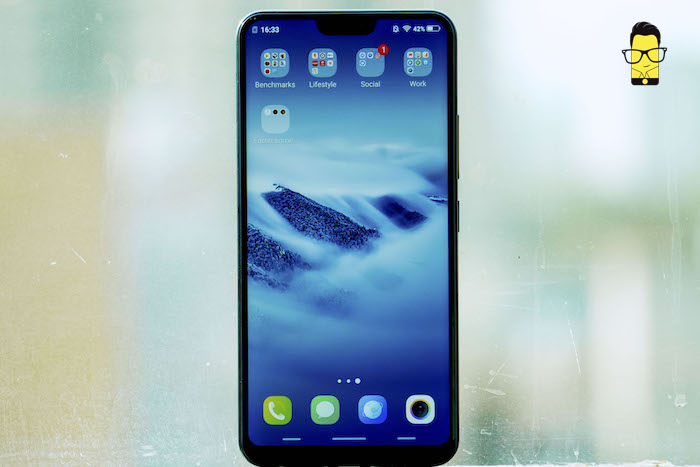 In my testing, I noticed that the V9’s display has a superb colour accuracy. When I was testing photos from the camera on the V9’s display and my colour calibrated panel, I noticed very slight differences in the two. The viewing angles are great too. Good job, Vivo. On the flipside, the sunlight legibility is above average at best because the display doesn’t get very bright. Moreover, there is a very evident cool tone to white screens, which can get a bit annoying after a while.

Overall though, I really like the display on the V9. Really no complaints.

Vivo’s Funtouch OS is now in version 4 and it runs on top of Android 8.1, which is pretty darn awesome. Vivo is probably one of the very few Chinese OEMs to include the latest version of Android in its phone. However, Funtouch OS 4 is nothing like stock Android. In fact, it is a lot like iOS 11 on the iPhone X.

Let it me break it down for you.

Moving on, I faced a weird problem in my time with the phone but that could be because it was pre-release review unit. Most apps and games – like for example YouTube, Asphalt 8, Netflix, and a few more – refused to acknowledge the V9 as a full-screen panel and treated it as a 16:9 display. What this means is that pinch to zoom didn’t work on YouTube and Asphalt 8 had black borders around the game. I really hope Vivo has a fix for this before the phone hits the market.

While it might seem like I didn’t like Funtouch OS, it is quite the contrary really. Funtouch OS despite all its visual similarities to iOS improves upon Apple’s OS with small refreshing changes.

Vivo V9 camera: all about the selfies

The V9’s camera spec sheet packs a punch. Apart from its 16MP+5MP dual camera setup on the rear, the V9 also comes with a 24MP selfie camera. Since the phone is all about them “selfies”, let’s talk about the front camera first. 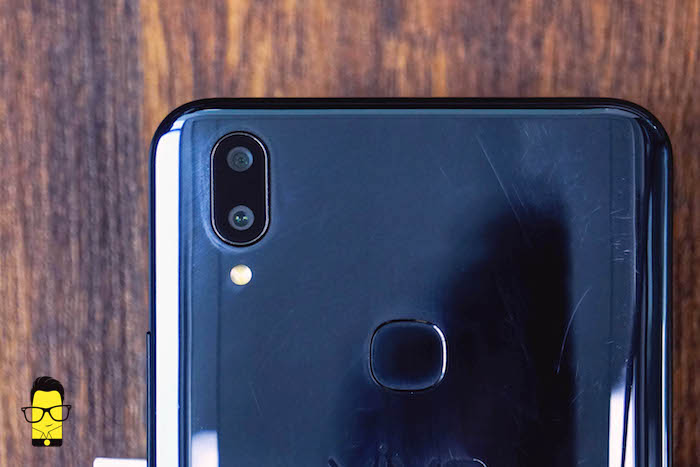 The camera uses Artificial Intelligence (AI) in its Face Beauty mode to identify the right skin tone for your face. I noticed that using this AI-based beauty effect tends to smudge the details but definitely makes you look a notch fairer. By default, the selfie camera captures a great amount of details and pleasing yet accurate colours. In fact, the rear camera feels weak in comparison; more on that later. Even in less than ideal conditions the V9’s 24MP front camera exposes well and captures a decent amount of details, albeit with some noise. There’s a Group Selfie mode which emulates the Panorama mode to stitch a series of pictures together and create a wide-angle selfie. The stitching is good enough for most use cases. 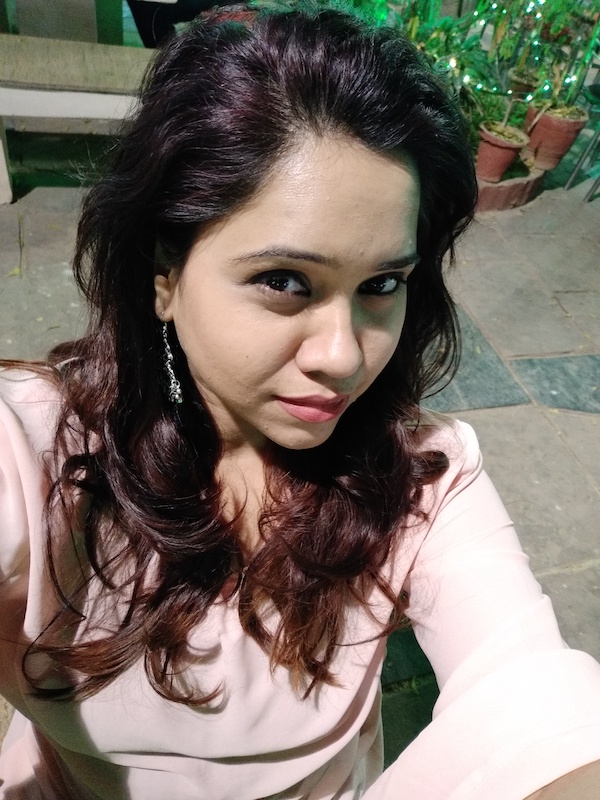 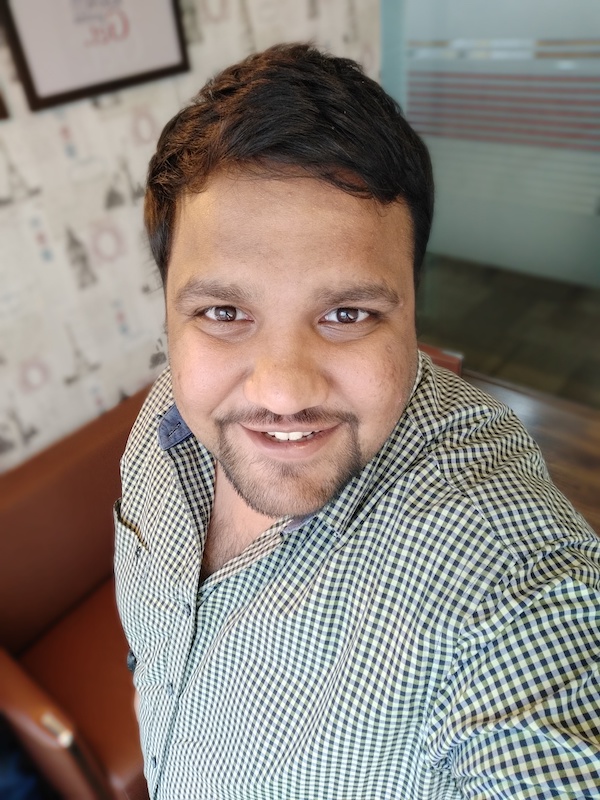 The front camera can also shoot portrait selfies using software and AI. It does a very good job of blurring the background. The new AR sticker mode is powered by the Pitu app and has quite a collection of cute stickers. Kids are bound to love these stickers. However, I noticed that the resulting pictures are smaller in size and you don’t get the full resolution. 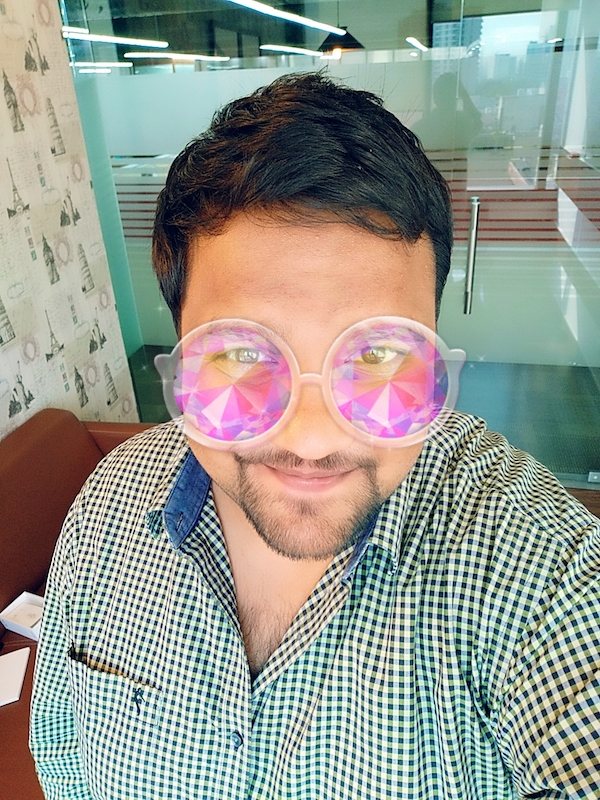 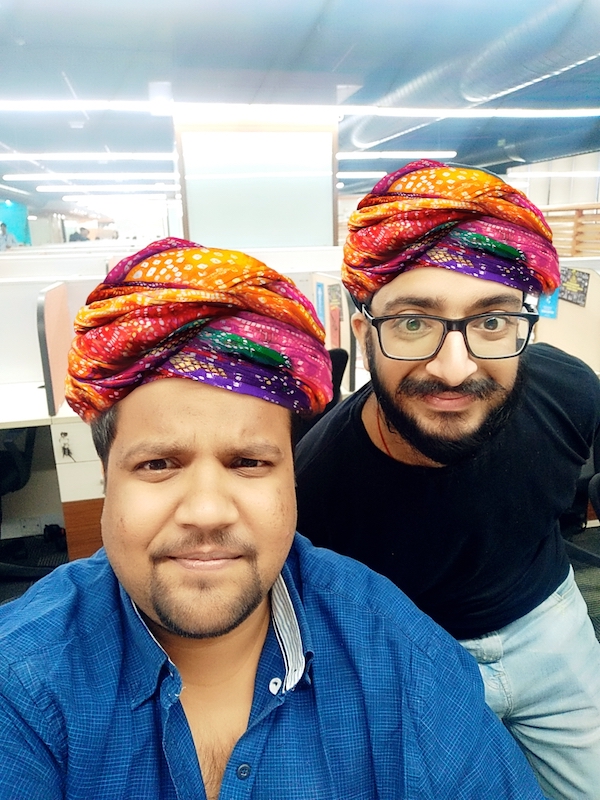 Now, the 16MP rear camera can capture some decent images in adequate lighting conditions but it is not really the best camera in this price range. The colour accuracy is on point but the camera tends to under-expose images and kill the details in the shadows. In conjunction with the 5MP camera on the rear, the V9 can capture pictures with a bokeh. The edge detection is on par with the iPhones with dual cameras, and that’s a good a thing. You can additionally change the focus before or after capturing the picture, which is a cool feature to have. In fact, you can open the aperture up to f/0.95. Obviously, this is a software-based appropriation of apertures. And, I strongly suggest you don’t push the aperture to as far as f/0.95 just like how you wouldn’t use digital zoom to its extreme. The resulting picture ends up looking artificial. 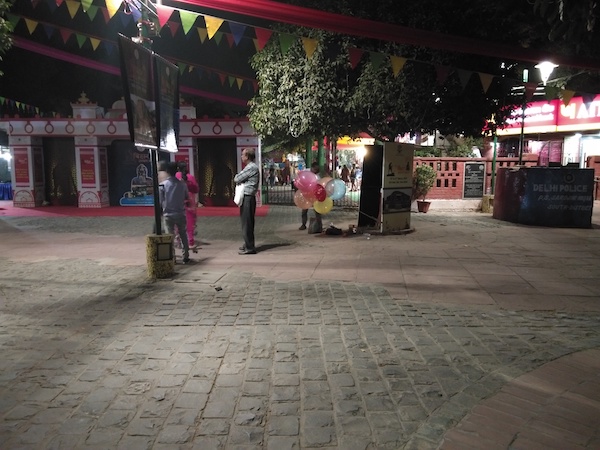 Overall, I think most users will end up picking the V9’s front camera more than its rear cameras for taking pictures. 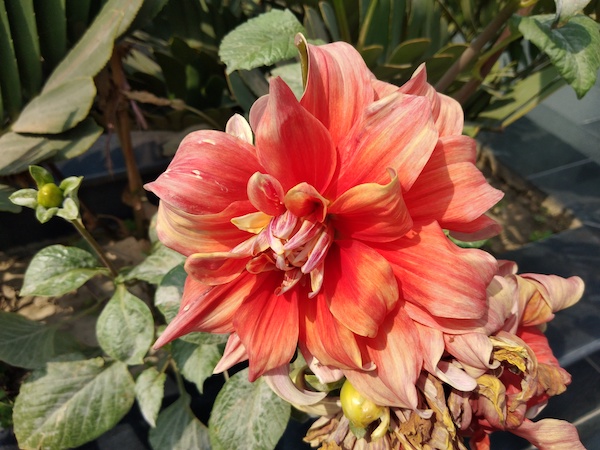 The Vivo V9 comes with a Snapdragon 626 SoC, 4GB of RAM, and 64GB of internal storage. This setup is enough to perform daily tasks and I didn’t face any memory management issues either. An app I use to test the performance of an Android smartphone the poorly-optimised Facebook app. Unfortunately, the phone stutters when scrolling through Facebook on the V9.

As far as synthetic benchmark numbers go, the V9 managed to log an AnTuTu score of 90,367. It also scored a low 21fps in our GFXbench T-Rex test. This shows why, gaming on the V9 is not as smooth as I would’ve ideally liked it to be. Games like Asphalt 8 and Modern Combat 5 tend to lag occasionally. 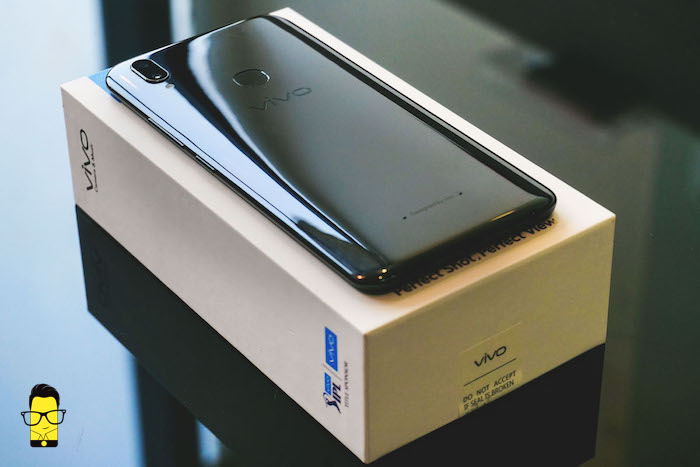 One area where the V9 excels is in its audio quality. The internal DAC is pretty powerful and the in-built music app can also playback hi-res FLAC files with ease. I used a reference FiiO F9 triple driver IEMs to test the V9 and the phone managed to drive them pretty easily. In fact, even the bundled EarPod lookalike earphones sound good. Moreover, the call clarity is top notch too with no call drops whatsoever.

The phone comes with a 3260mAh battery which is more than sufficient for a day’s worth of usage. Nothing more, nothing less. You can expect an average SoT of around 4 hours and 30 minutes. And, the V9’s included charging brick can charge your phone from 0 to 100 in around 2 hours.

Vivo V9: should you buy it?

1. Are you craving for an iPhone X but can’t afford one?

2. Do you hate iOS and prefer Android instead?

3. Do you love taking selfies?

If your answers are in the positive, then the Vivo V9 is definitely for you. In fact, the V9 is a modern smartphone defined by extremely tiny bezels, a notch, and a gesture-based OS.

Ultimately though, if I have to get real, there are other phones under Rs 25,000 that offer marginally better value-for-money than the V9. But, you and I, both know this – Vivo’s advertising blitzkrieg will take over India. From sponsoring the IPL to plastering stores with Vivo billboards, most prospective buyers will be bombarded by salesmen pitching the V9. And honestly, that’s not necessarily a bad thing.

Because unlike its previous phones, the V9 is a lot more sensibly priced for the specs that it offers. And despite its inspirations and flaws, the V9 is a step in the right direction for Vivo.