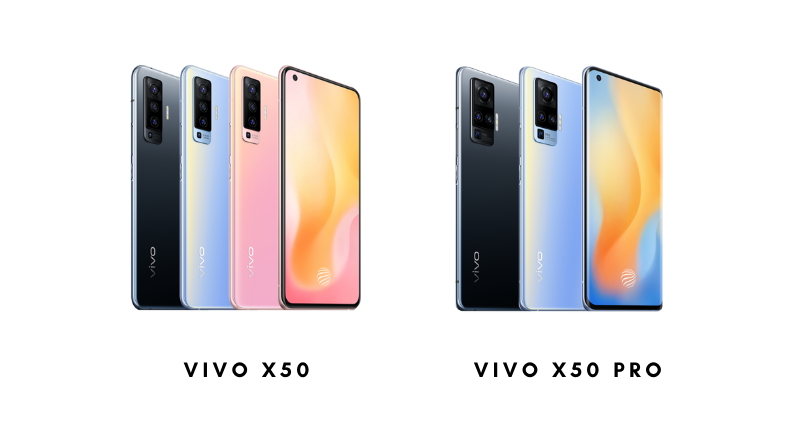 Today, Vivo has launched an all-new X50 series in India with a powerful Snapdragon 765G processor and a Gimbal camera setup. The new phones launched in India are dubbed as X50 and X50 Pro. The pricing starts at Rs 34,990, and Rs 49,990, respectively. They will go on sale starting from July 24, while pre-booking starts today. Let’s talk about the Vivo X50 series specifications below.

They both come with similar specifications in almost all areas except the rear camera department. The all-new X50 series comes with a 6.65-inch FHD+ resolution AMOLED display with HDR10+ and 90Hz refresh rate support. It is running on Android 10 based on Funtouch 10.5 version.

Speaking about the camera setup, on the rear X50 packs a 48MP, 13MP (portrait with 2X Optical Zoom), 8MP (wide), and 5MP macro lens. While the X50 Pro comes with a 48MP primary, 8MP periscope telephoto lens with 5X optical zoom, 13MP portrait lens with 2X optical zoom, and an 8MP ultra-wide lens. On the front, both phones pack a 32MP selfie camera.

Talking about the connectivity features, the X50 series have a Bluetooth 5.1, Wi-Fi, type-C 1.0, NFC, GPS, and more. Both have a fingerprint sensor under the display. The X50 comes with a 4200mAh battery, while the Pro model comes with a 4315mAh battery. They both charge the battery at 33W.

What do you guys think of the new Vivo X50 series phones? Let us know in the comment section below.