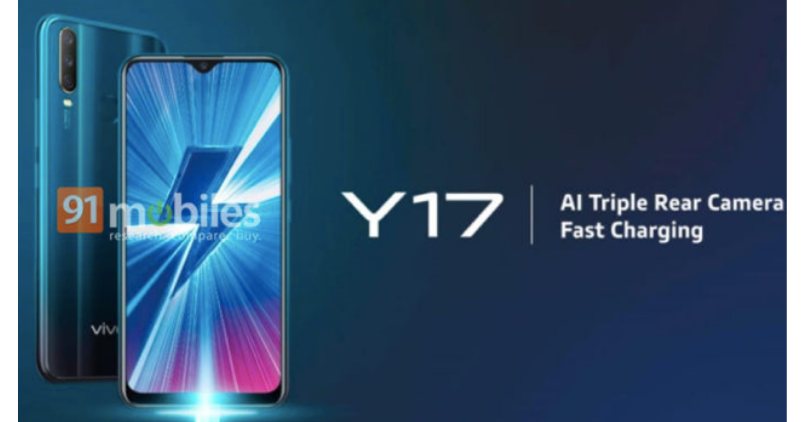 Vivo is all set to introduce its trump card in India dubbed as Vivo Y17. Originally believed to be called as Y5, the upcoming Vivo handset could be seen in the official poster revealed by 91Mobiles. The promotional poster gives us not only the look at the design but also hints at certain features of this unannounced phone.

Said to sport a 6.35-inch display, this Vivo handset could be powered by MediaTek Helio P35 processor. The processor is reportedly being aided by 4GB of RAM. It is said to run on the Android 9.0 Pie operating system based interface out of the box.

The poster suggests a triple rear camera setup is on its way. Placed in a vertical manner on the top left corner of the rear side. The LED flash unit is placed below the camera unit. The rear also said to house a fingerprint sensor. As far as design is concerned, the company teases minimal bezels and a water drop notch.

The Vivo phone is reportedly coming with a 5000mAh capacity battery. It could be coined as one of the largest battery packs available on a Vivo phone. Plus, there is a suggested fast charging feature that will be available on the phone. The details are unknown how fast it will be or the wattage.

According to the report, the Vivo Y17 price could start at Rs 16,990, which will put it among the likes of Samsung and Redmi phones to compete with. It is believed to arrive in India later this month.