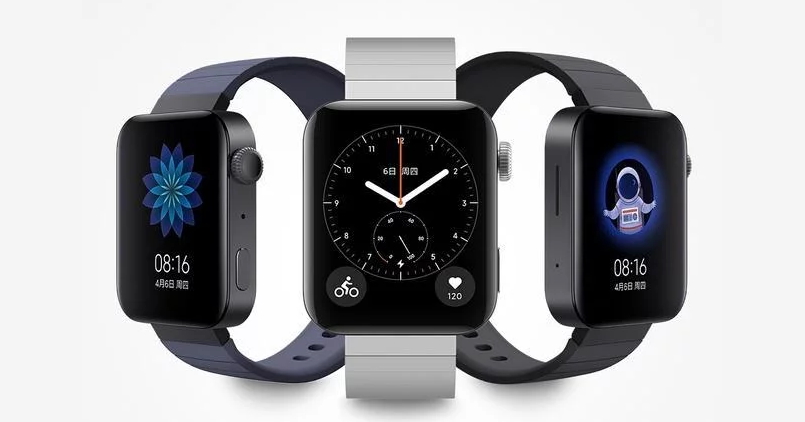 We’ve been hearing talks of a Xiaomi Mi Watch for a long time now, with the company itself leaking the renders of the device a couple of days ago. Well, today, Xiaomi made the Mi Watch official, alongside the Mi CC9 Pro. It doesn’t take an experienced eye to notice that the Mi Watch looks like an identical clone of the Apple Watch. However, there is a lot more to the Mi Watch, that legit makes it a product to consider. Let’s take a look.

Right off the bat, the Mi Watch features a design similar to the Apple Watch Series 5. There’s a crown on the right that can be used to navigate through the watch UI. Apart from the crown, there’s a multi-purpose button as well as a microphone on the right side. On the left, you have another microphone hole along with a speaker vent. It also features an aluminum alloy body with a matte finish. It comes with a 1.78-inch AMOLED curved square touchscreen display with 326 PPI.

Under the hood, it is powered by the Qualcomm Snapdragon Wear 3100 4G chipset featuring four Cortex A7 cores clocked at 1.2GHz. In fact, the Mi Watch is the first smartwatch to feature this chipset. You also get 1GB of RAM and 8GB of internal storage. The Mi Watch support 4G LTE connectivity, while still claiming a battery backup of up to 2 hours. This is largely possible thanks to the massive 570mAh battery, which is one of the biggest batteries on a smartwatch. It also comes with added features such as NFC, Bluetooth 4.2, Wi-Fi (n), GPS, an independent vibration motor, and a pretty large speaker.

In terms of software, the watch features Google’s Wear OS with the company’s MIUI for Watch custom skin. It will feature multiple watch faces along with Xiaomi’s voice assistant as well. Speaking about MIUI for Watch, the smartwatch will feature its own App Store as well, in which there are already 40+ apps optimized for the watch. The Mi Watch also supports heart rate monitoring, blood oxygen VO2 max sensor, sleep monitoring, and body energy monitoring.

Despite all the plethora of features that the Mi Watch offers, it has been priced quite aggressively with a starting price tag of just RMB 1299 (~Rs. 13,000). There’s also an exclusive edition that features a sapphire glass display with a polished stainless steel body and a stainless steel strap, which will retail for RMB 1999 (~Rs. 20,000). The standard edition will on sale starting today while the exclusive edition will be available in December 2019. As of now, there is no word as to when, even if, the Mi Watch will make its way to India. Stay tuned to Mr. Phone to get notified of all the latest buzz in the technology world.