Xiaomi has completed two generations of its famous Mix series of handset late last year. The brand’s first bezel-less device was received with aplomb even though it was a China exclusive. After one year, Xiaomi returned with the Mi Mix 2 when the bezel-less trend was starting to catch on. This time it came with a much comfortable size and even less bezels. Also, the handset was no longer kept exclusive to China. This was in September last year.

Fast forward to today and we’re very close to a new release in the same series. In less than six months, Xiaomi is refreshing the Mix series with the Mi Mix 2s. What can we expect from this new device when it launches on March 27? Here’s all that we know to give you an idea.

Also read: Xiaomi has launched the Redmi 5 in India for Rs 7,999

Since there aren’t many days to the launch of the handset, Xiaomi itself has started teasing some highlighted features of the Mi Mix 2s. So, we start with those features that are confirmed to be on the flagship.

The Mi Mix series always boasted top-end hardware and it will be no different with the Mi Mix 2s. It will feature a Snapdragon 845 SoC. The handset has appeared on benchmarks with the said CPU and scores point to a beastly device. The Mi Mix 2s scored a mind-boggling 273,741 points on AnTuTu, according to official info. To put that into perspective, even the Apple iPhone X scored just 222,462. Xiaomi’s first official invite for the device came with the mention of the Snapdragon 845. Hence, this is a sealed deal.

Another feature that is now official is wireless charging. The Mi Mix 2s will be the first Xiaomi device to boast of such a feature. Again, this has been confirmed by a Xiaomi teaser itself. Also, it should have some form of fast charging as well. Industry experts believe that Xiaomi will also launch its own wireless charging pad on the same day.

Moreover, Xiaomi has also teased AI features for the Mi Mix 2s. This will mostly be related to the camera. Expect functions like automatic scene recognition, auto HDR, AI beautification and more. One of the more recent teasers also hint towards a slow-mo or a fast focus or probably both features. Although the teaser pasted below doesn’t state anything, this two feature are strongly suggested to be on the phone. 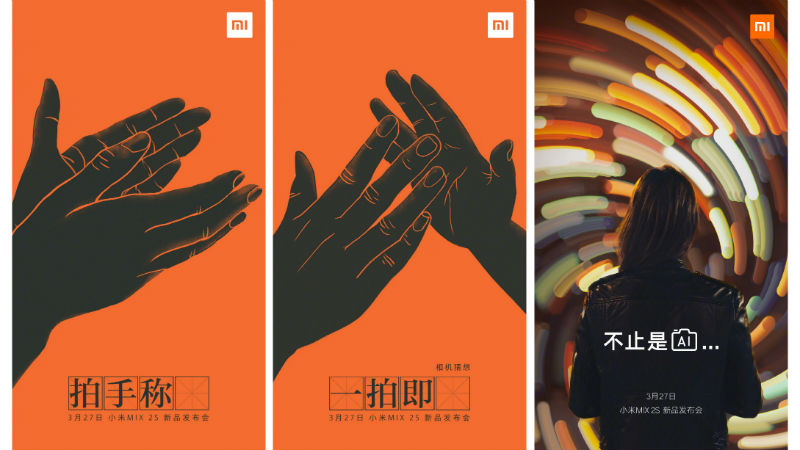 Now, coming to the speculative part of the Mi Mix 2s, the design. Most leaked renders and images hint at one of two designs. The older ones portray the Mi Mix 2s to feature a miniature notch on the top right side of the screen. Indeed, it is a very unique look. However, new live images that have started to pour in hint at a continuation of the previous design. This means that we’re simply bound to see even thinner bottom bezels while all other elements stay the same. However, the front camera might be placed in the centre of the bottom bezel. As for rumoured specs, the Mi Mix 2s will likely be equipped with a 5.99-inch Full-HD+ display and at least 6GB of RAM. Android 8.0 Oreo is believed to be on board the new flagship fueled by a 3,400mAh battery.

There is a possibility that we might get a new leak that sheds light on more aspects of the Mi Mix 2s in the coming days. That said, Do you like the Mi Mix series? Would you buy a Mi Mix 2s if it launched in India?  Share your thoughts with us in the sections below.