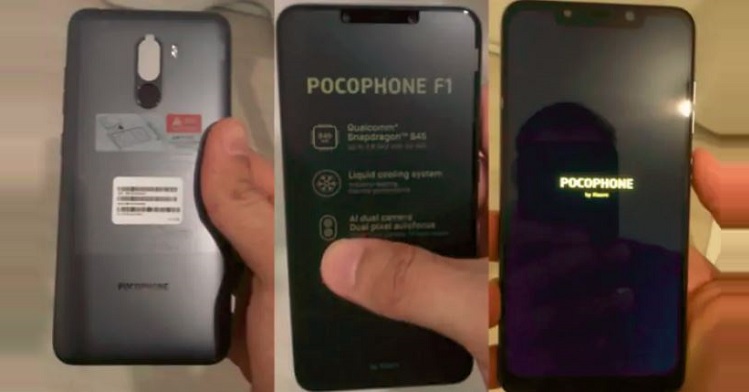 Today morning Xiaomi’s lead product manager confirmed the existence of a Pocophone. Co-incidentally, an unboxing video of what appears to be the Pocophone F1 has surfaced online. There is not one but the couple of video leaks that have popped up online, where the specifications and features of the device are highlighted. This is the first time when we get to see the handset in action.

For those who have not read our story on POCO by Xiaomi, well, you must know that the company has officially introduced this brand/moniker as a new project that will be introduced soon. From what we have gathered so far, we feel that this new series will be placed in the premium segment with aggressive pricing.

What did we learn about Pocophone F1 from the video?

A video shared by Slashleaks showcases the alleged retail unit of the phone. The design of the phone can be seen as well as the features mentioned on the retail box. The Snapdragon 845 SoC with a liquid cooling system, 4000mAh capacity, 20 MP selfie camera, and IR Face Unlock. Plus, the device will have a 3.5mm audio jack and a USB Type-C.

Whereas in the second video, it shows the Pocophone F1 running the Antutu benchmark application. The previous report stated that the phone scored 285,302 points, but unfortunately, it scores only 258,149 points on the live video testing.

Interestingly, a tipster at Slashleak suggests that the Pocophone F1 could end up releasing sometime in mid-September or early October 2018. This is too early to suggest the launch date, but Xiaomi could very well make it its primary tool for its fight against OnePlus and other brands with aggressive premium offerings.

What do you guys think of the Xiaomi Pocophone F1? Let us know in the comments section below.