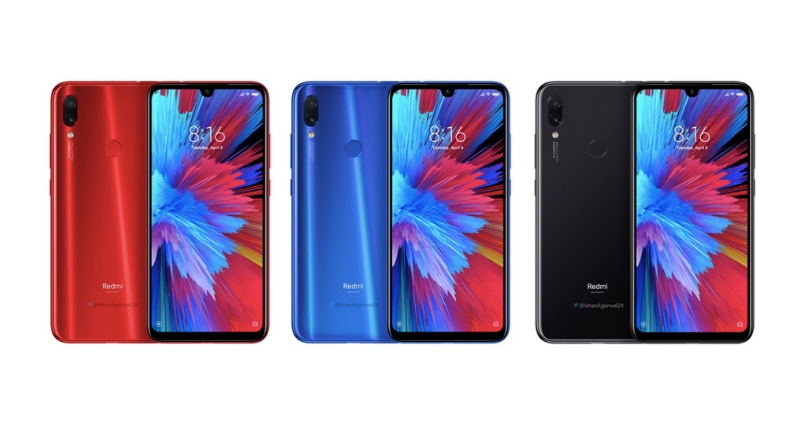 Xiaomi could be introducing not one but two Redmi phones in India on February 28. The Chinese smartphone maker is all set to introduce the Redmi Note successor, as it has been due for an upgrade. The Note 7 that was launched in China earlier this year hasn’t received a Pro variant launch yet. Meaning the Note 7 Pro is yet to be launched in China.

But according to the latest leak from Ishan Agarwal, we may see the Redmi Note 7 Pro popup in India first as a Global launch. The primary difference between the regular and Pro variant would be the camera and processor. Not just that, we have got the press renders and RAM/storage configurations from the young leakster as well. Let’s talk about them below.

Redmi Note 7 Pro: it is said to arrive in India

The Redmi Note 7 Pro will sport similar design but will probably have different shades of colour as we noticed in the renders shared on Twitter. Further, near the cameras, you can see different notes engraved. The Note 7 model reads a 48MP AI dual camera, which houses a 0.8-micron sensor. The Redmi Note 7 Pro is supposed to be a superior handset, meaning a better camera configuration is expected.

Now if you see at the alleged Redmi Note 7 Pro renders, you’d notice it mentions, AI camera with sensor size and aperture size. It clearly showcases a sensor size of more than 0.8 micron, at 1.22 micron (it’s not exactly clear). Further, the aperture size is at f/2.2 aperture size. Of course, these are high quality renders, but it’s hard to make out what exactly is written near the camera sensors.

There are certain things that may come as news to some of you, but Xiaomi could introduce Redmi as a separate brand in India as well as it did in India. You can see the brand on the back bottom, Redmi by Xiaomi.

Since Ishan has already confirmed on his new tweet that there would be two Redmi phones coming to India. The excitement levels have indeed peaked. Further, the Redmi Note 7 is believed to come in two configs; 3GB/32GB and 4GB/64GB. The Redmi Note 7 Pro would come in only one configuration; 4GB/64GB.

What do you guys think about the Redmi Note 7 Pro launch in India? Let us know in the comment section below.